How is a bicyclist regarded in a road rage incident with a bus?

I was on a bicycle. A bus was tailgating me and honking his horn. When we stopped at light I twisted his mirror around. Did I commit any crimes?

Driver was trying to scare me or he was just a crappy driver. When we stopped at a light I smacked the hell out of his mirror. Then when he got out of the bus and started yelling at me I hit it again a few times. But it wasn't damaged.

This incident ended with him chasing me and pushing me off of my bike. I had my camera running the whole time so I have audio but the video is never pointing the right direction. While he was pushing me I was yelling at him that if he touches me it is assault.

So, if I file a complaint am I in legal peril for having twisted his mirror around? The mirror (LOL): 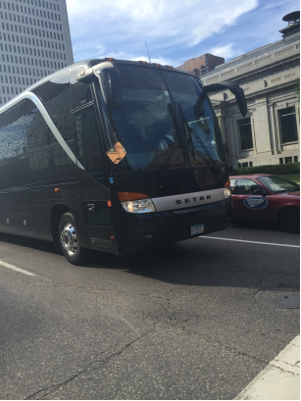 The problem with these situations is that you don't get to choose how it goes once it's in the hands of law enforcement. Possible scenarios on bringing a complaint to police or prosecutors:

Of course, you could also send a complaint to the bus company. They are (hopefully) more likely to worry about what their drivers are doing.

The DoT is also concerned with CDL safety, so you can file a complaint with the FMCSA NCCDB.

Every jurisdiction will have their own version of this, but what you have done to the bus is criminal damage.

The elements of the offence (in Victoria, but every jurisdiction will have a corresponding offence with roughly the same elements) are:

Lawful excuses include self-defence and duress. I don't get the impression that you thought that battering the bus was going to stop the bus driver trying to drive over you etc; you were just venting your anger. That's not a lawful excuse.

Maybe the police will exercise their discretion not to press charges, on the basis that you don't routinely go around battering mirrors and this was a one-off stressful situation, or that the damage is negligible. I don't know.

Note I am assuming you caused damage. I don't understand your photo; to me those mirrors looks like they're in the normal positions. If you just touched the mirror and maybe caused an inconvenience because the driver had to stop and re-adjust it, at best you're obstructing traffic (itself an offence but not as serious as criminal damage).

I don't know your jurisdiction so I can't tell you whether your law has some statutory provision for interference with a bus to be a summary capital offence.

EDIT: There is also a summary offence called 'disorderly conduct', for which you can be fined (and for which you can be arrested, but not imprisoned). The definition in Victoria is 'Any person who behaves in a disorderly manner in a public place is guilty of an offence'. That's pretty broad and wouldn't require actual damage to anything.

Not the answer you're looking for? Browse other questions tagged united-states criminal-law traffic assault or ask your own question.

4
How did they get away with making films like Bumfights?
1
If an emergency vehicle approaches from ahead while I am driving on a two-lane road with no shoulder, what am I obligated to do?
0
If under investigation for a minor incident, how do I answer immigration questions about my criminal history?
1
How are social networks regarded in the United States (public vs. private space)?
0
How does the US legal system treat car accidents with pedestrian casualties?
0
Accident with a truck stopped on the road side to do road work with no sign
2
Is a police car parked perpendicular to the road (with flashing lights) sufficient by itself to legally establish road closure to all traffic?
5
How does good faith defense work with a strict liability law?
2
Are there statistics on how often Mistrial with Prejudice happens in the US?