In the following sentence:

A building with a wall for painting text and drawings,

in which said wall is painted with a layer of opaque ink, and

in which said wall is painted with a message.

However, if the word "said" is replaced by the word "the", does it then also contemplate an embodiment where a wall is first painted with a message and secondly painted with a layer of opaque ink?

A building with a wall for painting text and drawings,

in which the wall is painted with a layer of opaque ink, and

in which the wall is painted with a message.

It has long been an unrealized desideratum for legal language to be unambiguously interpreted based just on the words of the text, making use only of logic, grammar, and lexical knowledge. The definite article "the" is a bit lax in how strongly it binds its phrase to another phrase, so while "the wall" refers to some wall that is known, it could be known from general context, and not the sentence. The legal modifier "said", a short form of "aforesaid", is thought to be more precise because something that is "said before" actually has to be mentioned, and this (by rules of literal semantics) limits the referent to something actually mentioned in the text. That isn't necessarily the case with "the". However, there are other tools that can be used to determine intention, involving looking at more of the context, to see if there is any plausible interpretation where "the" doesn't make these walls coreferential. "Said" is discussed p. 89 in Tiersma Legal Language, where he points out that using "said" can be just as ambiguous as "the", for instance:

Lessee promises to pay a cleaning deposit of $200 and a damage deposit equivalent to one month's rent. Said deposit shall accrue interest at a rate of five percent per annum.

Which deposit? And certainly not both. The only way in which "said" can ever be superior to "the" is in forcing reference-resolution to be something in the text, not generally "in the discourse". And even then, it's usually easy to tell what the actual intent was – if one bases interpretation on intent.

Now turning to broader details of your example, what you give is not a sentence, it is just a noun phrase -- you minimally need a verb to be a sentence. The phrase identifies a building whose salient characteristic is a wall, where the wall has a particular purpose, and it also says that there is both opaque ink and a painted message. The non-strange interpretation of that is that you first paint it with opaque ink (actually, we're in trouble here since you don't paint with ink), and then you add a message (using paint, it appears). But since it didn't say "and then" or anything else, the chronological sequence isn't specified, so either order of adding things to the wall is consistent with the text. Selection of "the" vs. "said" has absolutely no effect on that interpretation.

The language just varies depending on the drafter. Here are some references that describe this usage.

Proper use of said in patent claims (emphasis mine):

There are currently three different practices used in writing patent claims. The first time an element or part is recited in a patent claim, it must be preceded by the indefinite article “a” or “an” (although some exceptions exist for “means” and plural recitations). For each repeated reference of an element, one practice is to use “said” preceding the element and use “the” for anything else. Alternatively, some practitioners precede everything with “said” upon repetition thereof. A third, and somewhat more recent practice, is to omit the use of “said”, and simply use “the” to precede everything repeated.

Gene Quinn, at IPWatchdog describes "the" and "said" as interchangeable:

Then when you subsequently refer to the element introduced you refer to is by either “said” or “the,” [...]

Either using "said" or "the" is sufficient to establish antecedent basis (reference to a previously introduced item). In describing antecedent basis, the USPTO uses "said" and "the" interchangeably:

The lack of clarity could arise where a claim refers to “said lever” or “the lever,” where the claim contains no earlier recitation or limitation of a lever and where it would be unclear as to what element the limitation was making reference.

No matter whether you use "said" or "the", the claim should contain an earlier mention of the thing.

A favorite patent blog of mine, Patently-O, posted some stats on the usage of "said" vs "the" over the years: 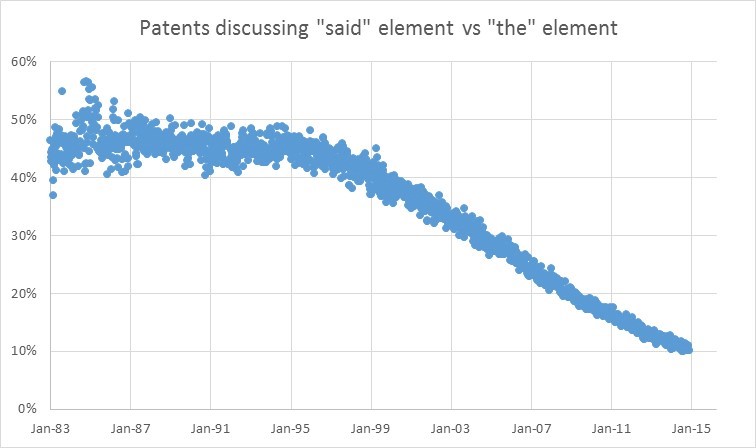 The author of that post also happens to argue in favor of "the" over "said":

my claim drafting practice was to largely avoid the word “said.” Instead, once a claim element is given antecedent basis, I would then refer to it as “the [element].”

Not the answer you're looking for? Browse other questions tagged patents claims or ask your own question.

1
Interpreting provisions of Intellectual Property agreement with a University
0
Using the code from a tutorial?
0
can I submit a new insurance claim on roof damage after unpaid claim unrepaired
47
Can I forbid the government from using my patented invention?
0
Can I copyright all creative works created hereafter by doing this?
1
Can the U.S. government challenge, reverse or appeal any court decision made by the European Patent Office?
16
What is the effect of lost and recovered prior art on patent validity?