What is the latest that one can enter into a right/left-only lane in order to make a turn at the intersection in NYC?

Busy streets lanes near an intersection sometimes have arrow markings such as "straight only", and "right/left only": 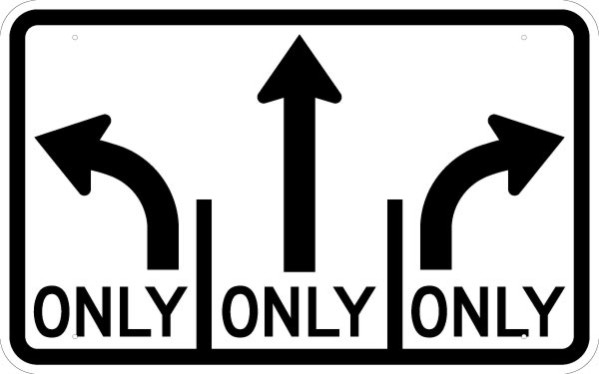 If you are on the "straight only" lane, when is the latest that you may enter into the "right/left only lane" before coming close to the intersection in New York City?

If you had entered into the lane too late and gotten a ticket (1163a vtl for an "Improper Turn"), what defense could you use at a court to lessen your judgement?

The statute doesn't say much in detail (from the New York State Vehicle and Traffic Law (unfortunately, the site works on javascript, so, you have to navigate by opening the "Laws" menu and then making your way from there):

(b and c are not relevant)

The last bit, (d), is of interest. Basically, you are allowed to change into the correct lane as long as the pavement markings permit it. The pavement markings at an intersection with a sign like the one you posted are generally solid white lines. These details are governed by the Manual on Uniform Traffic Control Devices, published by the Federal Highway Administration. Their information on pavement markings is available both in PDF and HTML format. Pertinently, it says:

Therefore, if the lines separating the lanes are, as usual, solid white lines, you are encouraged to get into the correct lane before the beginning of the solid white line, but you are permitted to change lanes across the solid lines. An example of such marking is in the right-hand example in the given image:

One point of possible contention is that the New York State Driver's Manual describes the meaning of the solid white line somewhat differently:

One solid line: You can pass other vehicles or change lanes, but you can only do so when obstructions in the road or traffic conditions make it necessary.

I don't see any statutory basis for that description, but I may well have overlooked something.

I suppose you know where the signs are specified, since you probably got the image from there, but for anyone reading this who does not know, they are specified in the publication Standard Highway Signs. This is available as a set of PDF files; the relevant file is the one containing regulatory signs; the sign in the question is 1-33, and it is in the midst of several similar signs.

If a police officer ticketed you for getting into the lane too late, I suppose you should find a lawyer who specializes in fighting traffic tickets, and ask whether there really is such a thing as "too late." By my reading of the law, there isn't. (Of course, if it's dangerous to change lanes because of other vehicles, you shouldn't change lanes, but if you had, I would suppose the officer should have written a ticket for some other violation, like reckless driving.)

Not the answer you're looking for? Browse other questions tagged traffic new-york-city or ask your own question.

2
Right of way: U-turn vs right turn (Illinois)
4
Can one make a right turn at the intersection if there is a right turn slip lane?
1
Is a police car parked perpendicular to the road (with flashing lights) sufficient by itself to legally establish road closure to all traffic?
0
Who has right of way between a legal u-turn vs car driving out of a parking lot as per Texas rules?
1
Is it a violation to stop at a light in such a way as to prevent Cyclists from passing (USA)?
2
Crosswalk question regarding entry point into crosswalk