Is it okay to use the Arial Font in Software?

I'm building a video game. I was wondering if it was Okay to Develop software with the Arial font. Do I need a license? Do I need to purchase it? Because I'm not really sure.

Thanks for your time, I appreciate it.

As far as I know, the Arial files that come pre-installed with your operating system are only licensed to you through your Windows license. You aren't authorized to distribute them. On the other hand, about 75% of people use Windows, which usually comes with Arial pre-installed, so you could just reference the system fonts and not worry about that.

If you're determined to support OS X and Linux, anyone can get Arial for free through Microsoft's core fonts for the web, but their EULA says you can't redistribute them. So you could encourage your users to locate and download that package.

You could buy an app license from myfonts.com (just search for it there), but that's pricey.

But now let me speak to you as a typography fanboy rather than a licensing nerd. I suggest you not use Arial. It is an already bland font made even more bland by overuse. Font choice is just as important as any other design element in a video game: would Candy Crush Saga (King, iOS/Android/Windows Phone/Browser, 2012) make as effective a message without this "delicious" chunky script font? 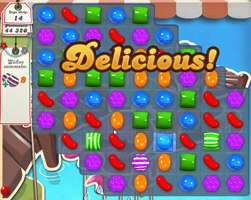 Arial cannot aid the atmosphere of your game unless you are making a game about the history of typography. Think carefully about your choice of typeface and whether one that actively encourages neutrality is your goal. But if you must, there is a simple solution: Arimo. It is metrically compatible with Arial, meaning every character in Arimo has the same width as its counterpart in Arial, so that documents typeset in both fonts will have the same layout.

Share
Improve this answer
answered Oct 25, 2016 at 5:24
IronGopherIronGopher
3
Add a comment  |
Law Stack Exchange is for educational purposes only and is not a substitute for individualized advice from a qualified legal practitioner. Communications on Law Stack Exchange are not privileged communications and do not create an attorney-client relationship.

2
How do I license a font I created to sell
0
Licensing software opensource but keeping reputation as the creator
0
Do fonts integrated in the browser need licensing?
0
Developing software under GPLv3 and selling the source code
2
Can I use non-commercial software for a project that may earn money in the future?
0
How can I commercially use a font with a copyright but no licensing information?
2
Using Windows Media Player SDK in a commercial software
0
Do I need a server license to allow users to generate reports using proprietary fonts from my software?