Establishing Ownership of a Sink Drain In Wall - Condo in California

I wanted some help on one particular part of a "case" I'm putting together to present to my HOA. Long story short, I had a leak in my wall from a drain line from my kitchen sink. It damaged the unit below me a little bit. In my mind, this was unquestionably HOA domain because the leak was within the wall (behind the studs). The HOA reviewed the CC&Rs and found a tidbit about "leaks between units" being the responsibility of owners and stuck me with the bill.

I (and they) apparently did not have the Condominium Plan on-hand so I got it repaired since I didn't have much ammo to argue with them. I've since obtained the condo plan and it pretty clearly places the ownership of "sewer lines" on the HOA.

What I want is a little help exploring the legal definition of the term "outlet" though, as it grants an exception for "outlets within units".

I just want to make sure they can't turn it around on me, especially since the wall in question is a wall in the middle of my unit and the condo plan only shows the four outer walls.

This is my "case" so far: (Copy/paste with some mods)

Per [the HOA president] meeting email, he points out this from the Regulations:

“ the HOA not being responsible for water leaks between units or interior damage.”

This is in reference to sections in the CC&Rs and Regulations that were discussed at the 12/7 HOA meeting with reference, in part, to the leak that occurred from a drain line in my wall.

There was confusion stemming primarily from the fact that the CC&Rs don’t specify one way or the other, in short, “who owns the pipes” in their text. Jonathan reviewed the documents and essentially took it as implied that since leaks between units are the domain of owners, then pipes that leak are the domain of owners too. The notion that the pipes and drains in the walls belong to the individual owners did not sound correct to me though, for a few reasons, but essentially it "didn't sound right".

At the time, Jonathan invited me to review our Condo’s documents if I disagreed with the conclusion. Here’s my findings:

Jonathan’s analysis hinged primarily on this portion of our “Rules and Regulations”:

LEAKS BETWEEN UNITS Please be aware that damages to adjoining units are the responsibility of the unit owner where the leak originated....

The main question this raises is “What is defined, in concrete terms, as a Unit?”

There is some guidance in the Rules & Regs themselves a few pages earlier, laying a general rule that a “Unit” is inside of a “unit” bounded by the surface of walls, floors, etc: 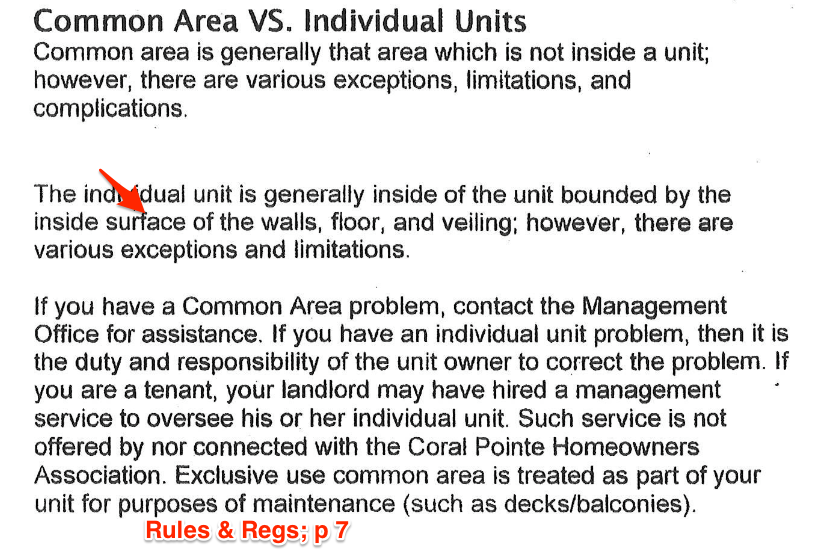 It notes some exceptions and is self-referential, so let’s see about getting a more authoritative answer on what a Unit is. This can be found in the CC&Rs:

1.43. Separate Interest or Unit. Separate Interest or unit, which shall consist of a “Residential Element", a “Garage Element”, and either a'“Deck Element” or a “Patio Element", shall mean a separate interest in space as as defined in Section 1351 (f) of the California Civil Code. Each Separate Interest or Unit shall be a separate freehold estate, as separately shown, numbered and designated in the Condominium Plan. In interpreting deeds, declarations and plans, the existing physical boundaries of the Unit or a unit constructed or reconstructed in substantial accordance with the Condominium Plan and the original plans hereof, if such plans are available, shall be conclusively presumed to be its boundaries rather than the description exPressed in the deed Condominium Plan or Declaration, regardless of settling or lateral movement of the building and regardless of minor variances between boundaries, as shown on the Condominium Plan- or defined in the deed and Declaration, and the boundaries of a building as constructed or reconstructed.

The main part of this is that units are defined on the Condo Plan. This is where my analysis came to a grinding halt for weeks as I tried to figure out, well, what and where is the condo plan?

In short, it is a map with the specific graphs and definitions for who owns everything. It’s supposed to have been part of what I received from our management company but I confirmed it wasn’t included, and further, that they did not have a copy of it when I asked them to look.

I eventually went a little more granular and asked “What exactly do I legally own?” in an effort to find it and though to check my Deed:

[It referenced the Condo Plan by instrument number at the County]. I obtained a copy from the County Clerk Recorder’s office using this information.

It has some diagrams and the like, but the most important part is in the first few pages, in the “Definitions” section: 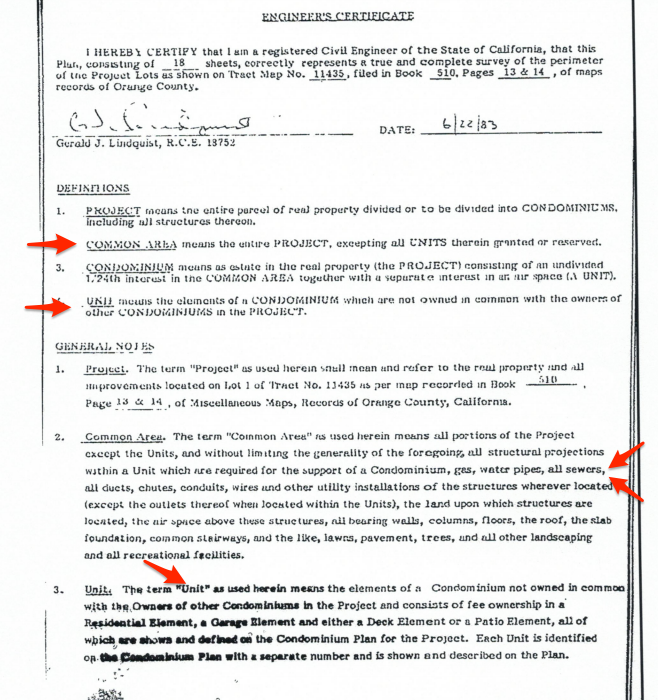 As you can see, “all sewers” are specifically called out as common area, as well as “water pipes” etc. This is further supported by the earlier assessment that anything that is not within the “surfaces” of a unit is also common area. Which, coming back to the CC&Rs, places it squarely in the domain of the HOA, which is responsible for …”repairs… of the Common Area”:

[you get the idea and I don't have enough SE rep to post more links...]

To reiterate, What I want is a little help exploring the legal definition of the term "outlet" though, as it grants an exception for "outlets within units". Other observations and feedback on my legal reasoning is welcome as well though :)

You have to take the General Notes part in its full context. The relevant clause says

The term “Common Area” as used herein means all portions of the Project except the Units, and without limiting the generality of the forgoing, all structural projections within a Unit which are required for the support of a Condominium, gas, water pipes, all sewers, all ducts, chutes, conduits, wires and other utility installations of the structures wherever located (except the outlets thereof when located within the Units)…

The most proximal expression is "wires and other utility installations", so construing "outlets" as covering gas, water, sewers, ducts etc. would be contrary to the interpretive principle known as the Last Antecedent rule. Nothing in the context requires a broad-scope interpretation of the "outlet" exception. This being in the US, courts would use ordinary English usage to understand what an "outlet" is, that is, even if "you could argue" that something is an outlet, the term "outlet" is used in the context of buildings to refer to an electrical outlet.

The way this works is that you would need to get an expert witness to testify as to the common meaning of "outlet" in this context. There are two approaches to doing that. One is to get testimony of a contractor, as to what they mean when they say "outlet". However, contractors speak a special language (and not consistently so), and it's dubious that either party of a contract could have understood "outlet" in a special way shared by contractors. So the other approach (exemplified by Heller) is to call on a language and usage expert. A DIY approach is to google things like "sewer outlet", "electrical outlet" and so on, to see if you get many hits. You do not have a sewer outlet in your unit. You might have a water outlet if you work on cars and brought one inside the unit, but clearly context dictates that that is not relevant. The way courts resolve these matters is to determine what the ordinary meaning of a term is, and set aside specilized and technical meanings. See for example Nix v. Hedden where SCOTUS ruled that a tomato is not a legal fruit, because scientific definitions notwithstanding, a tomato is clearly a vegetable in common usage.

Note that I am specifically addressing the question you posed, about "outlets". IO believe that attention to "outlets" is misguided. Focus should be on the regulation about "the HOA not being responsible for water leaks between units or interior damage", which is what they are invoking. By your description, the hole in the pipe which constitutes the source of the leak was behind the wall. The problem is that "between units" can have two very different meanings, one being "from one unit to another", and the other is "which takes place in the area that exists between units". Since you do not own the area behind the walls (presumably: property descriptions can be less than totally clear), there was no leak from one unit to the other. There was a leak which took place in the space between units. The definitions for the project clearly indicate that such behind-the-wall stuff is "common area".

If a breech in the drain pipe occurs outside the wall and leaked into the unit below, that would be a leak outside the common are, and would be a leak between units in the "from one to the other" sense, although the water would have to pass through the common area. But if it originated on the other side of the wall, it originated in the common area which is always present between units. Suppose, being devil's advocate, that you own not just the stuff inside the walls but also the stuff behind the walls, up to the next unit's walls. But if you apply that analysis of property boundaries, then the adjacent unit's property is the stuff inside his walls and between, up to your walls, so unless you are very special, you don't own the area between the walls.

So to reiterate, "outlet" is a irrelevant. What matters is the interpretation of "leak between". Under neither interpretation of that expression is a leak behind the wall the responsibility of the person "upstairs".

To get really technical: a sewer is an underground pipe for the carriage of sewage owned by a utility - a pipe that carries sewage that is privately owned is a sanitary drain (if underground) or sanitary plumbing (if above ground). The pipe that leaked is therefore part of the building's sanitary plumbing. That said, I don't think that the use of the word "Sewer" in the engineer's certificate is meant in that very technical way because it doesn't make sense to be describing something as being owned by the HOA when, by definition, it has to belong to the sewerage utility. Besides the guy is a civil engineer and what they generally know about building services you could fit in a matchbox without taking the matches out first.

In context, an "outlet" is the thing that delivers or removes the stuff carried by the building service: a power point for electrical, a data point for comms, a diffuser for air, a faucet for water and a plug and waste for sewage. My reading of it is that you are responsible for your sink up to and including the waste that is fixed to the bottom and that the union that is part of the HOA's pipe screws onto, you are not even responsible for the trap beneath the sink let alone the pipe in the wall.

Not the answer you're looking for? Browse other questions tagged property common-property or ask your own question.