Why are emergency exits that don't immediately open legal?

I was at Costco today and saw an emergency exit that looked like this: 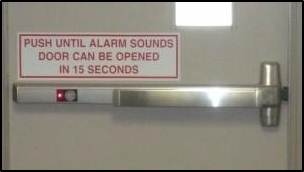 Why would an emergency exit legally be able to have a delay before opening? Being hurt in 15 seconds is very possible in an emergency situation (such as an earthquake causing pieces of the ceiling to fall, possibly blocking the exit while it's opening).

The Issaquah code does not appear to have any special requirements on emergency exits, so county codes would be operative. The relevant King county code is that:

It is not clear if there is a public list of approved devices, though one may reasonably assume that the Costco device is approved.

Washington's building codes can be found at https://apps.des.wa.gov/sbcc/Page.aspx?nid=14. They have adopted the 2015 International Fire Code (IFC) (with amendments that aren't relevant here).

IFC Chapter 10 discussess "Means of Egress". (Sorry for the slightly messed up formatting.) A Costco store seems to be a Group M building under Section 202. The doors you describe are referred to as "delayed egress locking systems" and are explicitly allowed, with the maximum delay specified as 15 seconds:

The rationale, presumably, is a compromise between safety of occupants (so that people can get out without excessive delay) and security of goods (to hinder people trying to steal goods and run away).

I'll also point out that the delay feature is required to deactivate under certain circumstances. If your hypothetical earthquake caused the sprinkler or fire detection systems to activate, or it caused the power to fail, the door could be opened immediately.

If Washington's legislators thought this provision was a bad idea, they could certainly create an amendment that would apply within Washington. It seems they have not seen fit to do so.

The delay is presumably for theft prevention; and also to prevent fire alarms from going off when someone simply and honestly mistakes a fire exit for a real exit in an non-emergency sense.

The building safety and fire codes that allow such a delay will be very localized at the city/county/state level; you may be better off asking at that Costco, asking Costco at the corporate level, and the local fire department; all should be very up front for the rationale behind the delays and with your safety concerns. Edit: see user6726's answer for some relevant local codes.

Costco as a corporation will have a building division with specific engineers tasked with building safety and liability. I'm sure Costco has done their due diligence for each store location and the relevant fire codes dealing with delay devices to help prevent "product leakage"; the liability - both real and imagined in terms of marketing and PR - is too great to make a mistake.

Presumably there are research metrics that allow the calculations for a reasonable time span of the delay allowed for the opening of exit doors. Building safety and fire codes codes will take into account the number of exits in a building, where those exits exist (ground floor, upper floors with exterior stairs), the maximum occupancy of a building, as well as other factors such as seismic threats and the survivability of a structure in an earthquake, the speed at which a fire can expand and when smoke may fill a structure, and more.

15 seconds isn't that much time; think of the time you might stand still and look around after you first heard a fire alarm. I'd say that's easily 15 seconds. But 15 seconds is a long time for someone to stand and wait at a door if they are stealing. To be clear, I'd be a bit curious and maybe worried if I saw that sign; and esp. if I saw a fire door locked/chained closed, which would be highly illegal and outlawed by code. But I can see a reason for such a 15 second delay.

It's simple. The delay is to prevent theft. If the fire system detects a fire, the delay is removed, if the power goes out, the delay is removed. All other situations the delay is in place. If you want to change building codes to include earthquake and gunfire sensors (both are available) then you need to proposition your local government officals. If you think it is unsafe at these businesses, then do not shop there until the code is changed.

Not the answer you're looking for? Browse other questions tagged safety or ask your own question.

4
Is it legal to ride in the open bed of a pickup truck?
0
Are open air cremations illegal in most of the US?