How can I tell what is meant by “assault”, as opposed to “battery”?

In English law, I'm struggling to find a consistent definition of "assault", or at least, a way to decide what definition to apply:

An assault is any act which intentionally—or possibly recklessly—causes another person to apprehend immediate and unlawful personal violence. Although "assault" is an independent crime and is to be treated as such, for practical purposes today "assault" is generally synonymous with the term "battery" and is a term used to mean the actual intended use of unlawful force to another person without his consent. On the facts of the present case the "assault" alleged involved a "battery."

I'm not sure what to make of this. We are to "treat as such" that "assault" is an independent crime, but then it goes on to contradict this by saying that in the present case we can include the "battery" as being part of the "assault", because the two are "generally synonymous". It's hard to see how he can justify both positions simultaneously.

So, ignoring the every day English language meaning of the words, is there in fact a clear and precise definition of "assault" (in which case some sources are simply using it incorrectly), or do I just need to accept that there is confusion, even within the law itself, and rely on context to establish in any given instance which meaning is meant?

You have accurately summed up the conundrum. There is little else to say. You need to accept that there is confusion, even within the law itself, and rely on context to establish in any given instance which meaning is meant. You will come to find that there are many instances of such confusion in the law.

The historic technical distinction in the law (especially in tort law) between assault and battery has been collapsed in the everyday vernacular and this had made its way even into the way that the words are used even by law enforcement officers and legislators, who grew up speaking the vernacular language like everyone else.

In my part of the United States (Maryland, one of the 13 states that was once part of Britain), the terms "Assault" and "Assault and Battery" are still used, with the former being a crime that is clearly making a threat, while the latter is a crime that involves the actual physical violence (the idea is that at the point of Battery (the physical violent part of the crime) one has already assaulted the victim (the threat of the violent act).

One uniquely American example is that it is usually a crime to point an object at someone who reasonably believes it to be a gun (even if it isn't load, or even if it's just a toy that looks like the real deal but is useless at actually firing a bullet. By Law, Toy Companies must put a bright orange cap over the barrel of a toy gun, even if it's clearly not colored like a gun, and many toy companies stopped making realistic looking guns at all. Often times when you hear about a kid with a toy gun getting shot, the kid likely removed the orange cap to make it look real. It's not the most kosher fact, but kids who live in high crime areas are frequently inducted into gangs at an early age and are making a real gun to intimidate a rival gang member.). If it's not specifically listed statute, this will be charged as "Assault" or "Assault with a Deadly Weapon". "With a Deadly Weapon" is open enough to cover firearms, elegant weapons from a simpler time (or real swords), knives, Baby Alligators (the weapon of choice of Florida Man. Seriously though, I'm aware of on case of Assault with a Deadly Weapon resulting from a Florida man throwing a baby alligator at a Wendy's Drive Through worker).. Actually shooting someone with a working gun would at the least be "Assault and Battery" though it's usually Attempted Murder.

This does have an advantage to the prosecution, as U.S. prosecutors love to make plea deals, they will normally charge a criminal with Assault and Battery, but give a deal that will call it Assault (which carries a lesser sentance) in exchange for not having to build a case and argue it in front of a jury.

An additional reason for this is that in Common Law, you cannot charge "lesser included crimes". If someone murders someone with violent force, and the prosecution charges murder, he cannot charge assault for the same crime because in order to murder someone, you have to assault them. It could be that "Assault and Battery" survives from a time when they were two seperate crimes but since Battery always involves Assault, they got merged into one crime to make it sound like it was two. If "Assault" and "Battery" are two crimes, then the new schema would be "Assault" and "Assault and Battery". Language trick, but to the uninformed it sounds like both crimes of Assault and Batter are charged, when in fact only one crime is. 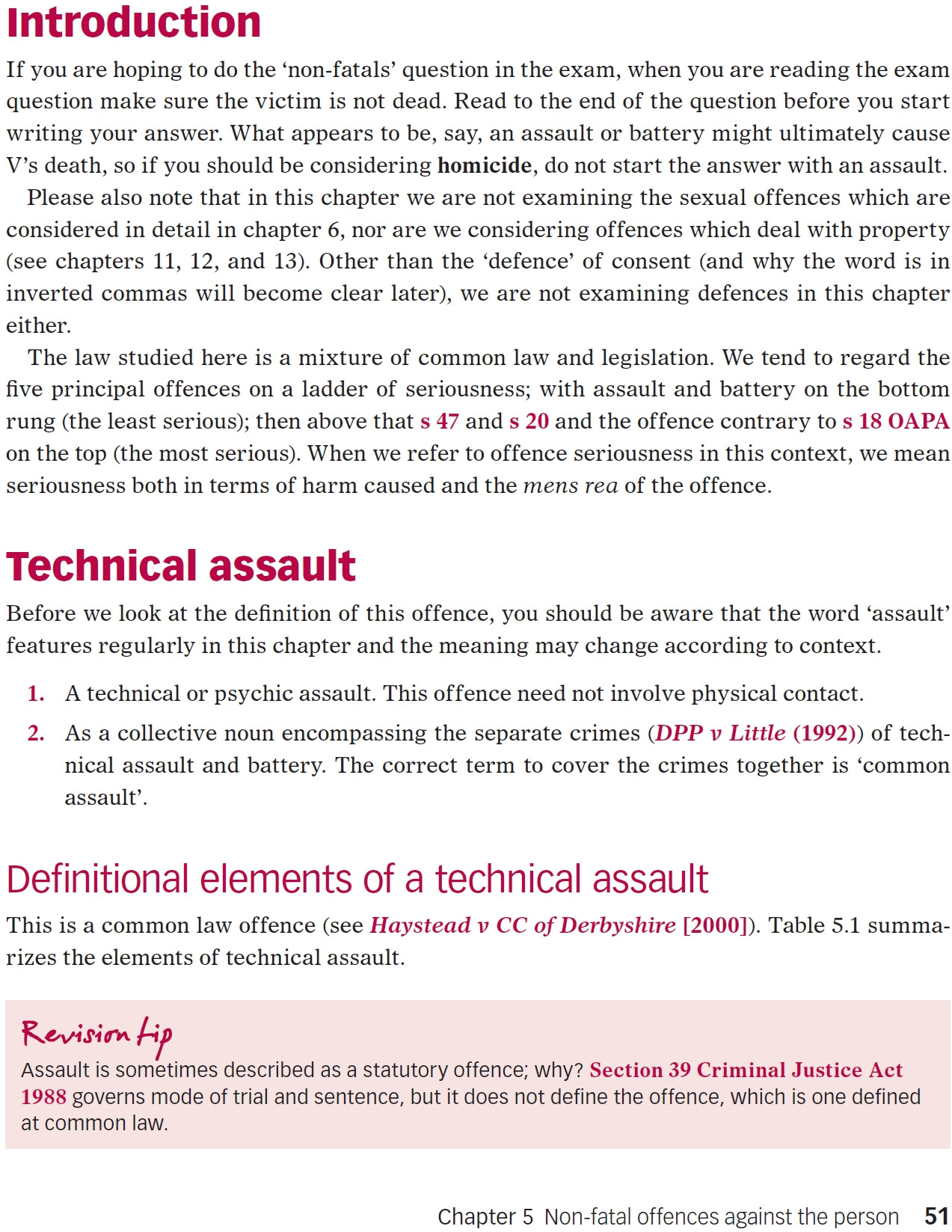 Not the answer you're looking for? Browse other questions tagged england-and-wales assault battery or ask your own question.

4
What qualifies as “violent” and “assault”?
5
Why can security guards/bar bouncers physically remove a person and it's not considered battery?
0
What meant Lord Mansfield by 'form', 'turn parties around upon frivolous objections', and 'ruin'?
3
How can laypeople investigate an airline's allegation of 'extraordinary circumstances'?
1
What is meant by a litigant insuring a judge's life?