Did CNN blackmail a private citizen?

Recently CNN went after the Reddit user who created a GIF (animated image) of President Trump smashing a WWE fighter with CNN's logo superimposed on the WWE fighter's head making it look like Trump was bashing CNN.

Once the meme went viral, CNN went after the user by finding out his identity. CNN claim that they attempted to contact the user but without response. 2 days later after the alleged "failed communication attempts", the Reddit user posted an apology to Reddit and deleted all his "offending posts". In CNN's article, they claim that they "reserve the right to release the identity of the Reddit user" if he re-offends so to speak.

According to Julian Assange, CNN committed a crime violating § 135.60 of the New York criminal code "coercion". 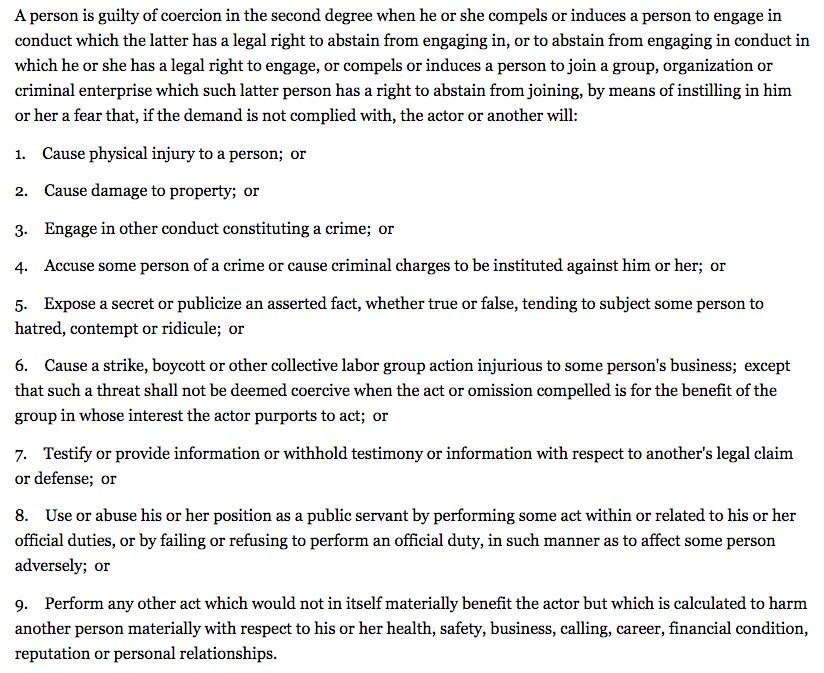 Reddit, while being a private company, is still considered a public forum. Anything said on these sites can be used against you if your actually identity is discovered.

TL;DNR: Blackmail seems straightforward, but it's not. It depends so much on the specific facts of the case that we need an expert to find out how this case would turn out.

Blackmail is a funny thing. It seems simple and straightforward until you start thinking about it. Take the classic blackmail scheme -- the cheating husband. The blackmailer does two things She: 1) asks the husband for money; and 2) threatens to tell his wife he's cheating. Both 1 & 2 are legal if done separately, but when done together they are a crime. Why is that?

There are lots of explanations for when Legal + Legal = Illegal. Unfortunately, none of the explanations seem to explain the law very well. For example, most of us think it would be legal to say to a thief, "Give me back my property, and I won't call the police," or for a judge to say, "Stay out of trouble for the next year, or I will put you back in jail." But both of those meet the definition of blackmail (as gnasher pointed out above!). So why are they ok?

Which category the CNN/Redditor case fits into depends on how courts have drawn the boundaries between blackmail and hard-bargaining (or other lawful actions). In other words, to answer your question, we probably need to hear from someone who actually knows the law. We also need to know a bit more about the facts of the case. For example, it might matter whether the Redditor offered to take stuff down and behave, or whether CNN offered to keep his name private if he stopped posting stuff they don't like.

Eugene Volokh had a nice piece on the complexities of blackmail on the Volokh Conspiracy this week. It's worth a read:

Not the answer you're looking for? Browse other questions tagged social-media blackmail or ask your own question.

2
When does an offer become criminal blackmail?
5
Is the National Enquirer guilty of the crime of blackmail?
1
Are private social-media companies violating our Free Speech rights?
2
Is fake blackmail still illegal?
2
Reposting pictures of private Instagram account elsewhere
0
Report Photo - Violation of Business Private Information
7
Blackmail inside Germany
2
Blackmail is illegal. But how is that enforced pragmatically?