What is the difference between Common Law and Civil Law in the U.S.?

Is there a difference between Common Law and Civil Law in the U.S., and if so, what is it?

Its always the simple questions that have complicated answers. In this case its because both Common Law and Civil Law have several different meanings.

In this context, civil law means the ability of people to seek redress for wrongs from other people. These people may be individuals (natural persons) or legal persons (corporations, government etc.). When someone sues someone else they are using civil law.

In contrast, criminal law is where a government prosecutes (not sues) a person (again natural or legal) who is alleged to have committed an offence.

To illustrate the difference, if a person murders another person the government will use criminal law to prosecute the murder and the family of the victim will use civil law to pursue a wrongful death suit.

In this context, common law and civil law refer to two of the major legal systems in use on Earth: 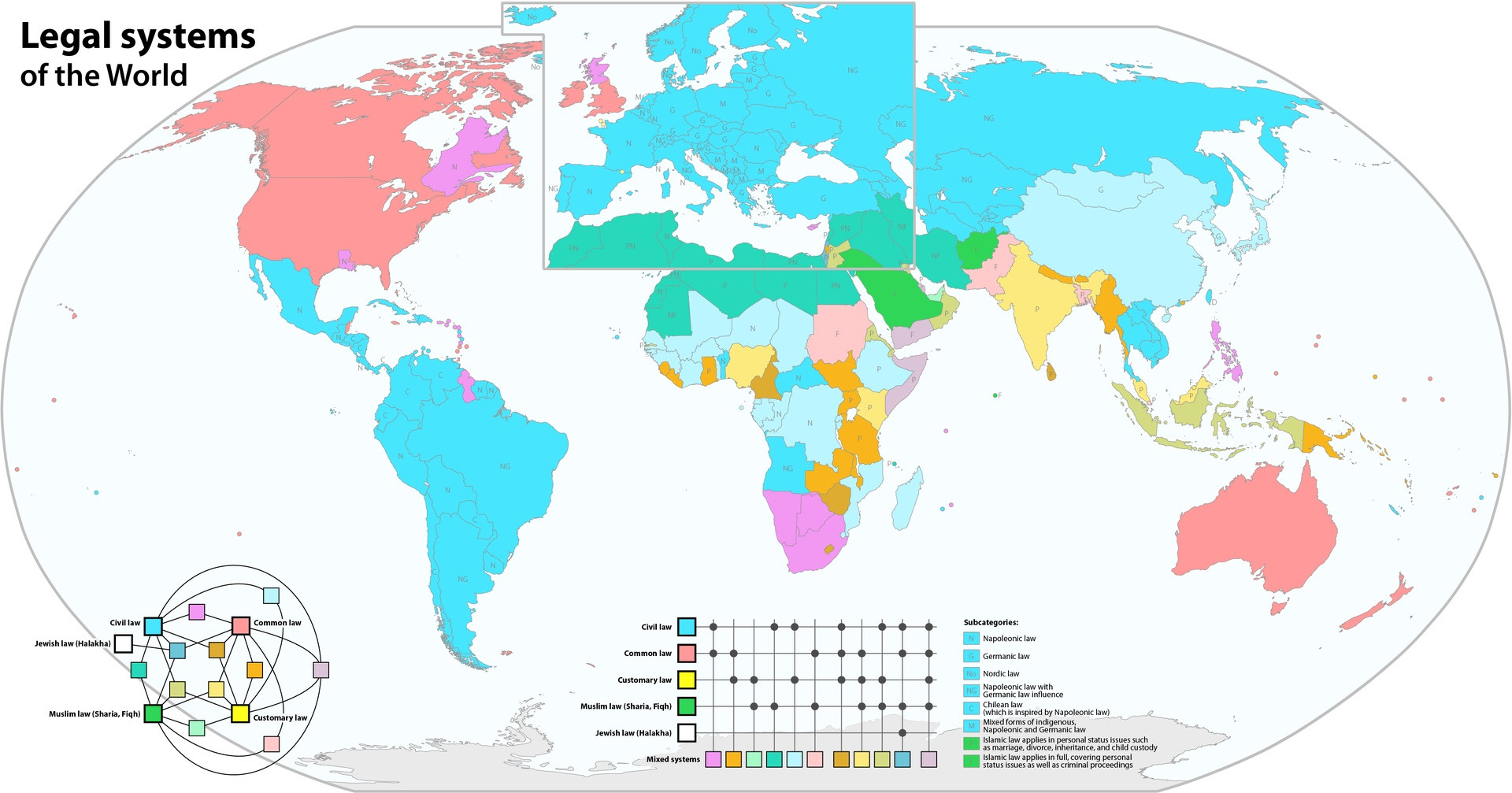 By Maximilian Dörrbecker (Chumwa) - Own work, using World map by Canuckguy and others UNESCO World Heritage map by NNW The data sources are:University of Ottawa: JuriGlobe – World Legal Systems Research Group Wikipedia: List of national legal systems European legal systems map by Ain92 and others (which seems to be based on this map by C.Löser and others) World legal systems map by Robinkissac, CC BY-SA 2.5, https://commons.wikimedia.org/w/index.php?curid=40154967

Common Law is derived from the law of England and is used in areas colonized by the English - the UK, Canada, the USA, Australia and New Zealand.

Civil Law is derived from continental European law and ultimately from Roman law.

The primary contrast between the two systems is the role of written decisions and precedent.

In common law jurisdictions, nearly every case that presents a bona fide disagreement on the law is resolved in a written opinion. In contrast, civil law decisions typically do not include explanatory opinions.

In common law systems, a single decided case is binding law to the same extent as statute or regulation, under the principle of stare decisis. In contrast, in civil law systems, individual decisions have only advisory, not binding effect. In civil law systems, case law only acquires weight when a long series of cases use consistent reasoning, called jurisprudence constante. Civil law lawyers consult case law to obtain their best prediction of how a court will rule, but comparatively, civil law judges are less bound to follow it.

For that reason, statutes in civil law systems are more comprehensive, detailed, and continuously updated, covering all matters capable of being brought before a court.

The United States and 49 of the states are Common Law jurisdictions, the exception is Louisiana which is a Civil Law jurisdiction (specifically the Napoleonic subset of Civil Law) as, unlike the rest of the country, it was initially a French possession.

In addition to the way the term is used above, "common law" can be used within a Common Law jurisdiction to distinguish that part of the law which arises from judicial precedent from that part which arises from legislative statute or administrative regulation.

Further, within legal argument, the term may be used to distinguish "common law" (or just "law") from equity.

Before 1873, England had two parallel court systems: courts of "law" which could only award money damages and recognized only the legal owner of property, and courts of "equity" (courts of chancery) that could issue injunctive relief (that is, a court order to a party to do something, give something to someone, or stop doing something) and recognized trusts of property.

Not the answer you're looking for? Browse other questions tagged united-states civil-law common-law or ask your own question.

1
Case law, statutory law, the UK and the European Union