Is it ethical or legal for journalist to request info from school district staff against their own rules?

This below screenshot is from the top of my latest article. There is a crisis at a New Jersey school and staff members have pictures that definitively prove wrongdoing. Many are afraid to come forward for fear of their job and retaliation. It is indeed against district rules to share pictures with the press. That’s why two people, one a parent (not a district employee), another the president of the teacher union (an employee), have volunteered to accept this information.

I’m not “encouraging” anyone to break any rules. If they do give info, it wouldn’t be to the press (at least, it’s a distinct step removed). Also, since they will never tell me who they got the pictures from, I could never reveal my sources even if I wanted to.

As a journalist, is the below information an ethical or legal risk in any way? I’m not directly asking them to break the rules, but obviously it will ultimately be given to me for this upcoming article.

Given all this, Is this information safe to include? Can it be reworded or otherwise presented differently to better protect me? 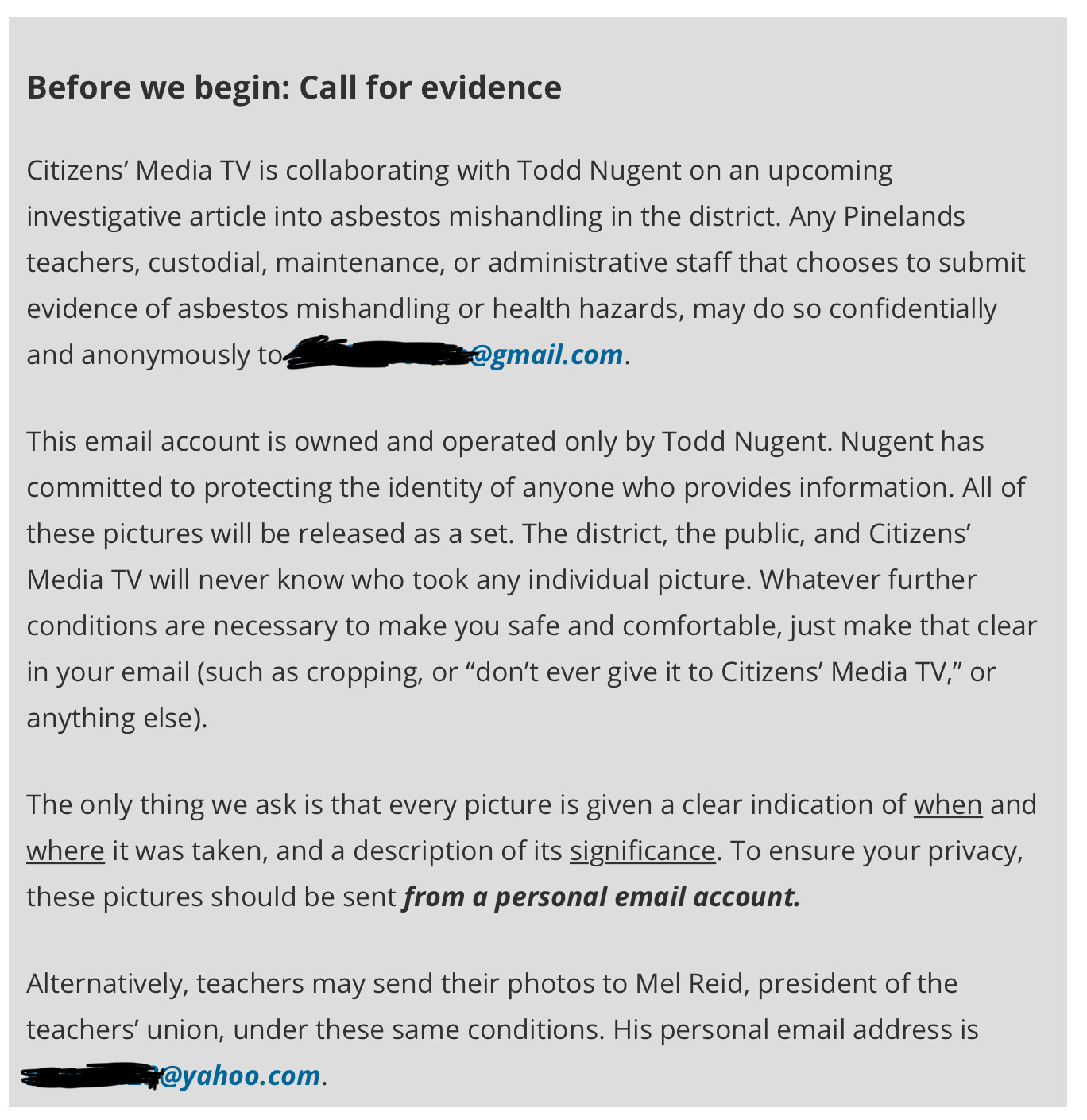 In a legal sense, if you are posing as a journalist, you can ask anything of anyone, and it's up to them to answer your questions or provide you with photos or documents. If they provide you with photos or documents against the regulations of their employer (or state or federal law), that's their prerogative and their legal risk. They can be protected by whistle-blower laws, depending on jurisdictions, and/or their identities protected by the journalist, depending on jurisdictions, as well as Shield laws and the legitimacy of the journalist and publication.

But you can't ethically promise them to protect them as journalistic sources when it is questionable if you can be considered a legitimate journalist, and as a result, legally protect your sources through what is called reporters' privilege (Electronic Frontier Foundation).

Some bloggers can be considered journalists; that is something that a court often decides. New Jersey does have a Shield law.

And read New Jersey blogger considered a journalist under state Shield Law | Reporters Committee for Freedom of the Press and N.J. Supreme Court says blogger not protected from revealing her sources | NJ.com.

You ask if you can be protected and promise protection to your sources. Could you be considered a real, working journalist? Can you sincerely and legally protect your sources? Could you be a case that is tested in court? I'd ask a lawyer.

I'd consult a lawyer on that one. There's a possibility it could be tortious interference, although I don't think it is. The caselaw is going to vary somewhat by state, although there may be First Amendment issues that apply throughout the US.

This paper is interesting. The introduction states that CBS once declined to broadcast an interview with a former VP of a tobacco company, on advice of their lawyers, because he would have breached a confidentiality agreement and they were not sure whether they would be liable for tortious interference. However, it also says "the timidity shown by CBS seems misplaced" and in a footnote speaks of speculation that they were being overly cautious due to buyout talks (a big lawsuit could make the company less attractive, even if they eventually win.)

The employees, of course, would be liable if they breached their contract, even if you aren't.

I answered your other question not knowing the nature of the environmental problem and believing you to be a teacher.

Since you have two sources, one who is not employed by the school, the best bet is to use the employee as an anonymous source and the non-employee as a named source. However, if your non-employee does not want to be named, as long as they didn't come to you together, it's perfectly valid to use their evidence with anonymous citation.

If possible, could you please describe how the teacher's union president feels safe from retaliation for his part in the investigation? One would suppose having the teacher's union in on this would make legal concerns for teachers a bit more easier, as they would devote union resources to firing of union members.

I would suggest only put the parent out there, and the parent could do a BCC to the Student Union Teacher, which will forward all the parent's outgoing e-mails to the President without the sender knowing. Also, I would change language regarding teachers talking to union president (if you leave that in) to instead ask for members of the Teacher's Union (a good number of non-teaching staff might be Union members, as they generally cover any school district employee in a school building, not just actual teachers). Custodial, Maintenance, Food Services, and Administrative Staff can fall under the general heading of "Staff" in your opening paragraph.

Not the answer you're looking for? Browse other questions tagged united-states contract-law liability new-jersey journalism or ask your own question.

0
Does this district bylaw prohibit staff talking with the press about the school buildings themselves?

0
Why doesn't s.65 Consumer Rights Act 2015 bar grocery staff from excluding their liability for killing my horse?
0
Are members of congress protected from lawsuits for their speech outside of Congress under rules of Standing or the Speech and Debate clause?