Is this a violation of copyright? WW2 Infamy Speech

I was watching FDR's Infamy Speech on Youtube which he makes after the Pearl Harbor attack, and noticed that it seems to belong to www.periscopefilm.com. You can see it at the start of the video: 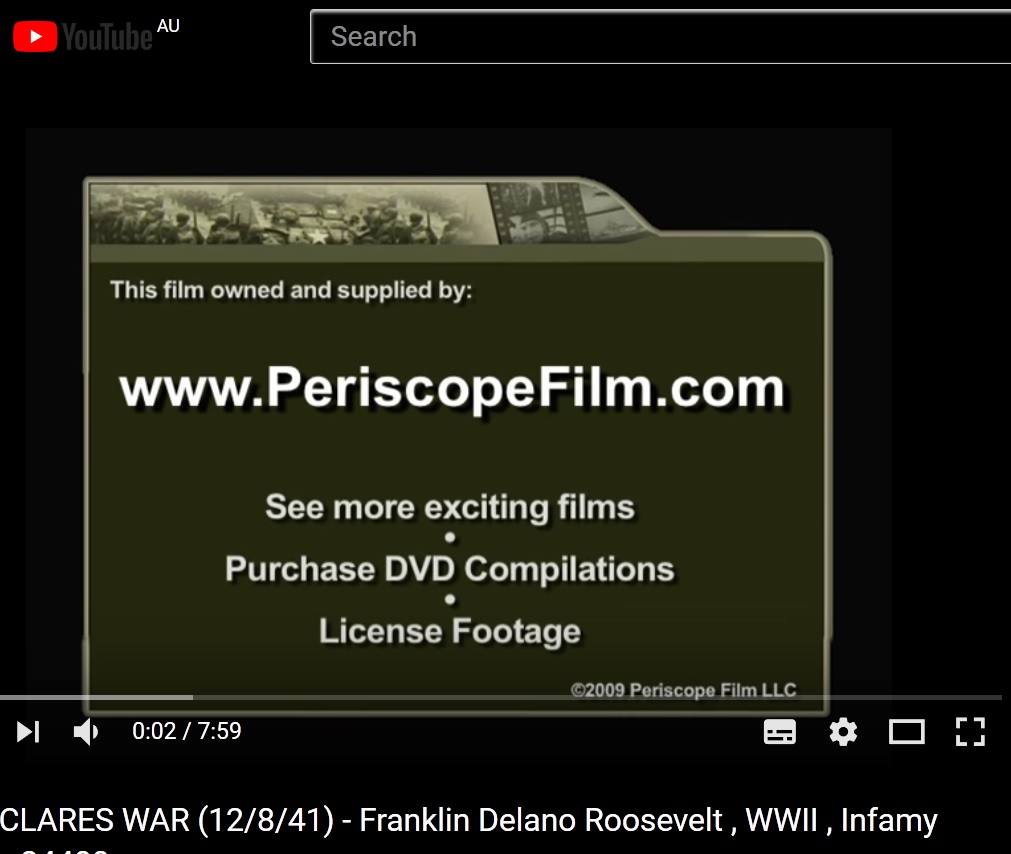 At their website sure enough the video is available for licensing, and it seems you have to pay to use it.

I found the exact same video at archive.org
Link

I'm wondering, for it to be shown on this site, does this mean that they have bought a licence?

Also, what gives them the right to own this video and prevent anyone else using it. I assume it's not in the public domain because you have to licence it from them, but I'm confused about some things because I don't know the law.

Also, if you see the video itself, it's watermarked with periscope.com, is this video entirely their property? Where does the original video exist? Or is it because they themselves had a film crew in Congress in 1941 and filmed it themselves?

All Government produced documents in the United States are public domain, as they belong to the people. The company may be asking for license to use their film, which may include several other clips that they put in any order. Their film, specifically, including any explanatory dialog, commentary, or editing choices, are not fair game. However, the clip you are asking about is not copyrighted and is fair for any use.

Though President Roosevelt spoke to Congress in a formal address, film of a government speech would be a public document only if the film was shot by a government entity.

A news agency that filmed the event would both own the physical film of the event and the copyright to the use of their footage, though the story of Universal Newsreel illustrates how rights to file footage can pass through the ownership of various entities and eventually to the Library of Congress, which warns that old imagery that was provide to the LOC may or may not be covered by copyright.

In some cases, private firms may have digitized archival material to make it available for commercial re-use and while the source material may not be copyrighted, they aren't necessarily obligated to share their high-resolution versions and may charge a fee for it. (For example, the Mona Lisa is clearly out of copyright, but no one is obligated to give you their high-resolution photo of it.)

And since some materials from the Library of Congress and other government sources are publicly available, there is nothing necessarily preventing private archives from also offering copies of those materials.

The speech itself is public domain, the static recording of the speech does not seem creative enough to be eligible for copyright (threshold of originality).

All in all, this is 99 % likely to be a bogus claim that can and should be ignored, as done by the user who uploaded it to the Internet Archive. If it's not bogus, they'll send a DMCA takedown request and provide information to prove their claim, then it may be removed.

The video can optionally be edited to remove the watermark and copyright notice.

Not the answer you're looking for? Browse other questions tagged copyright intellectual-property public-domain or ask your own question.

7
Using Wikipedia Text in a Video Game Copyright Issues?
3
How much of a codebase can be considered intellectual property?
5
Copyright status of restored works
1
Can cropping a sprite invalidate copyright?
2
Does this German company really control the use of the term 'emoji'?
16
How is internet archiving legal, when it appears to violate many websites terms of use?
8
Are "slavish copies" of public domain work in the public domain?
1
Is modifying a song's audio using youtube's Phase Vococer to slow it down to 0.25% a copyright violation?
4
Is it allowed to use a copyrighted music track on a video, but without integrating the audio into the video?
0
What is the difference between hotlinking and uploading to an image site WRT copyright?