Would I have a reasonable cause of action to consider suing a science centre for violating disability rights law?

As someone who is both totally blind and hard-of-hearing, I rely on tactile feedback a lot. I live in Oregon, and I heard that a new exhibit was going to be stationed permanently, so I wouldn't have to travel far. Yet, this website claims that they want to have Space Shuttle Endeavour under maximum conservation:

I was really disappointed because I was hoping to touch every inch of it, including walk inside of it and experience every detail firsthand. That way, if the audio or Braille information failed to clarify something, I could learn how certain parts and pieces moved to accomplish different tasks. People have various ways of learning, and one of them is through interaction and hands-on learning.

A sighted person can watch videos and pictures of how things move, a blind person wouldn't be able to see that, so they would need to be told, both auditory and tactile, how something moved.

I called the science centre's human resources department to file an internal grievance procedure, but I never heard back, so I contacted the US Department of Justice Americans with Disabilities Act (ADA) hotline, who advised me to file a complaint if they didn't have any reasonable accommodations. Under title II of the ADA, all public entities, be it federal, state, local, private or non-profit, are obligated to modify any policy unless there are legitimate reasons to screen out a minority group. So I filed a complaint with the ADA DOJ, but I'm not sure if they will find it in my favour or the centre's favour.

I mean, if I blindfolded you, and I took you to a great place you've always wanted to experience, but when we got there, we learned that you can only perceive it by seeing - You have an option. You can take your blindfolds and experience it. A totally blind person wouldn't have that option, so they would have to either require the business to make an exception, like wearing gloves to avoid getting fingerprints, or something else entirely.

I think there's a reasonable argument to be made. ADA requires reasonable accommodations for disabilities, but there's always going to be a fight over what is reasonable.

What's pretty clear, though, is that the museum is not required to make accommodations that would "threaten or destroy the historic significance of an historic property." So they'd have to think about what accommodations they can make without endangering the exhibit. To me, anyway, asking to walk up and touch it with gloves sounds reasonable; asking them to build scaffolding so you can touch every inch of it that others can see does not sound reasonable.

But I'm not a conservator. It may be that even a gloved hand would endanger the exhibit. If that's the case, the accommodation is probably not a reasonable one, and you'd probably need to think about other possible compromises.

Museums rarely allow anyone except trained conservators to touch any exhibit. Besides the real risk of physical damage, human skin is covered with a cocktail of bacteria and chemicals which will attack the exhibit.

The other answers here are good, but IMO are missing a key point.

The Shuttle Orbiter is currently displayed on a structure that appears to be ~20 feet off the ground (pictured below). As access to it, even for merely touching the exterior, appears to require heavy equipment like a scissor lift, being able to touch it seems unlikely to be deemed a "reasonable accommodation".

Alternative accommodations might include an text/audio description of the Orbiter, or a smaller physical, touchable model of the craft.

The interior of the spacecraft is neither viewable nor touchable by visitors of any kind. There's no access to accommodate in that regard - OP's desire to explore the interior is understandable, but it's a privilege not afforded any visitor, regardless of disability or lack thereof. 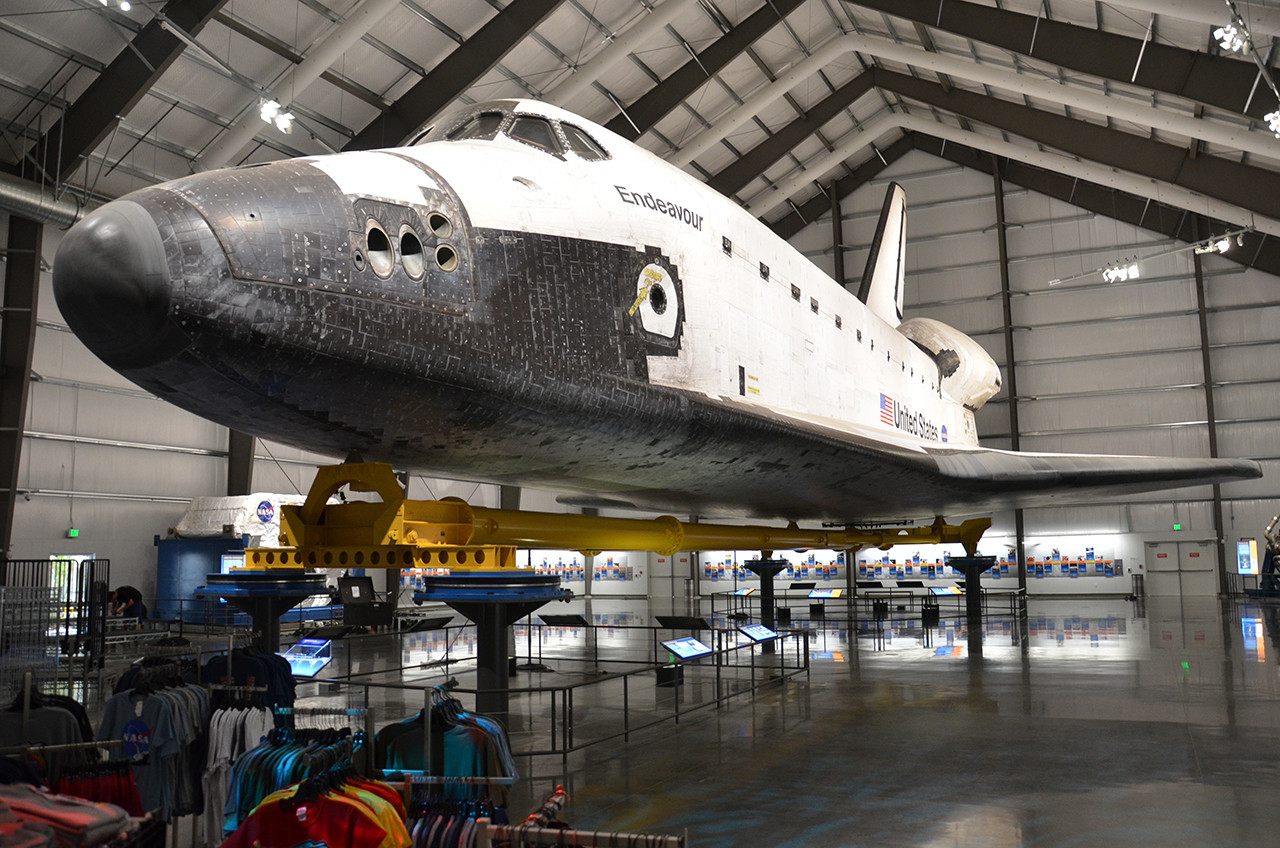 Would I have a reasonable cause of action to consider suing a science centre for violating disability rights law?

If they do not have a comprehensive audio description of what sighted people can see, then you might have cause, but the resolution would simply be to provide that audio description. It is unlikely that the ruling would force them to permit you to touch it, walk around inside or one it, or touch any of its controls because these actions may impact conservation of the artifact.

In my opinion, no. However, my opinion is not backed by any legal expertise. It is based merely on common sense, my own sense of equity (someone wants to sue a non-profit museum...? why? what if the time, money and energy that will go into attacking and defending in court were instead spent on something that helps all visitors with a disability?) and a bit of google searching. I have assumed your question is hypothetical; but, if this is a real legal issue then you should probably ignore all of us and go ask a lawyer specializing in ADA cases. You may then obtain a more professional and definitive answer than you will from random strangers online.

At III-3.1000-III-3.2000 it is emphasized that the intention of the act is to integrate individuals with disabilities into the mainstream of society so that they can obtain the same opportunity offered to non-disabled people.

In III-3.3000 we learn the same opportunity does not mean the same outcome.

III-3.3000 Equality in participation/benefits. The ADA mandates an equal opportunity to participate in or benefit from the goods and services offered by a place of public accommodation, but does not guarantee that an individual with a disability must achieve an identical result or level of achievement as persons without disabilities.

ILLUSTRATION 1: Persons with disabilities must not be limited to certain performances at a theater.

ILLUSTRATION 2: An individual who uses a wheelchair may not be excluded from an exercise class at a health club because he or she cannot do all of the exercises and derive the same result from the class as persons without disabilities.

The ability to touch things in a museum is also provided as an illustration of a permissible separate or special program.

ILLUSTRATION 1: Museums generally do not allow visitors to touch exhibits because handling can cause damage to the objects. A municipal museum may offer a special tour for individuals with vision impairments during which they are permitted to touch and handle specific objects on a limited basis. (It cannot, however, exclude a blind person from the standard museum tour.)

Note that the wording of the illustration does not suggest that an opportunity must be created for a person to touch every object, but instead has language (specific objects; limited basis) consistent with recognizing a museum's stewardship duty to protect and preserve its collections for future visitors.

But this is simply what I noticed from reading a small part of a very large document. My opinion is only an opinion, and as I said earlier, not from any expert knowledge.

Not the answer you're looking for? Browse other questions tagged united-states civil-law disabilities or ask your own question.