Can one claim unclaimed poultry living on their property?

Some time ago I dug out a pond on my piece of land in a small rural town in New Zealand. The intention was to attract wild ducks there and maybe have some domestic ducks, which I told all my neighbours.

Almost a year ago a couple of white domestic ducks showed up in the pond. They have been living there since then, occasionally fed by myself. None of my neighbours have any idea where they came from and who the owner could be (at least this is what they are telling me). The pond is rather prominent in the town so most locals now know that the ducks are there, still noone has ever shown up to say they are the owners. 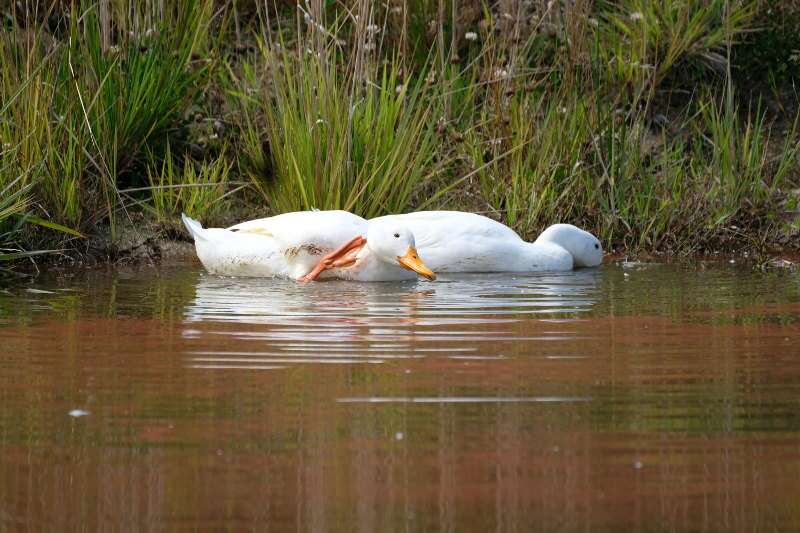 Can or could I ever legally claim the ducks?

From the picture, I believe those to be domestic geese rather than ducks. This is not needless pedantry; it is necessary pedantry because the Wildlife Act 1953 classifies geese as "Wildlife not protected" but ducks (relevant species) as "game". If they are game you need to abide by the relevant Fish and Game Council regulations (from a quick look it is legal to shoot them on your property but you need a licence to own and breed them; it seems unlikely anyone would worry about two waterfowl), but if they are geese they are as much, and as little, your property as a coin you found in the garden. There are no identifying marks and you have made a reasonable effort to find the owner, so you can treat them as your own. It is always possible for someone to claim they belong to him and should be returned, but the burden of proof will be on him to prove that these specific birds were concealed from him after escape or that you deliberately enticed them away, which seems hardly worth worrying about.

Not the answer you're looking for? Browse other questions tagged property ownership new-zealand animals or ask your own question.

3
Can residences be repossessed as with other real property?
1
What legal action can be taken to stop someone placing rubbish in my mailbox?
2
In what legal form can one shape their de facto occupation of local authority land?
5
Can employer claim ownership of intellectual property made while not at work?
0
Is criminal prosecution up to the police/state or can an individual push it?
0
Can seller of property impose conditions on how it is used by the new owner?
4
If suing for property damage can I claim for my time spent to replace those items?
9
Can a person hack bitcoin private keys and legally claim the bitcoins for himself?
3
Can someone sell the property (both jointly and separately owned) property of their imprisoned spouse?
3
What property rights do husbands have over their wife's hair?