Can a judge give a direct order to a police officer?

I'm a layperson. I have seen judges tell police officers to take an action (ex.evict someone or handcuff a defendant). Are police officers required to follow instructions from judges?

I've always thought so, but then I read Law 101 By Jay M. Feinman, page 20. Please help me understand what this means: 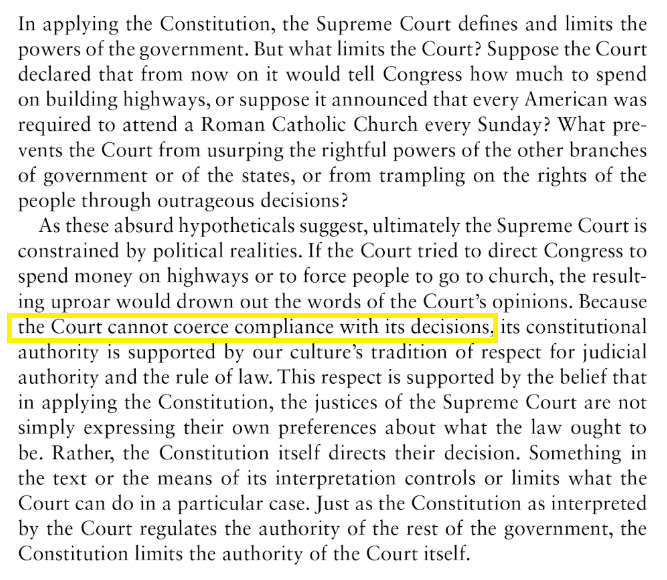 There is a special type of law enforcement officer, called a "bailiff" who is charged with maintaining order in a courtroom, and often, a bailiff is a direct subordinate of a judge who must follow the judge's orders.

The quote in question is not a statement about the legal authority of a judge, however. It is a statement of "realpolitik". The judge can't physically force or threaten law enforcement to do what they are told to do by a judge. The cops have the guns, not the judges.

Some forms of executive branch authority to defy judicial orders is even legally codified, most starkly in the case of the pardon power.

A police officer can legally coerce a person to do a thing, i.e. they can use force. The courts do not directly use force (i.e. the judge does not shoot a person who fails to comply), instead, they tell someone else (who is legally empowered to use force) to enforce the order.

The textbook takes a broad overview of the law and does not dive into specifics (at least on the page you cite), while the specifics you cite are very dependent on details and context.

The court orders something as a result of a legal process; the police or sheriff's department carries out the enforcement of the law and the court's decision. Courts make decisions; law enforcement carries them out.

A judge orders an eviction though the legal process that determines the grounds for an eviction, and a sheriff's department (generally not the police) carries out the court order for the eviction. A defendant can be handcuffed in court when they are found guilty by the jury, when they are found in contempt of court by the judge, or even when they are arrested by the bailiff or police in attendance for suspicion of a crime as a result of the court proceedings.

Not the answer you're looking for? Browse other questions tagged police us-supreme-court judge or ask your own question.

2
Can a bill suspend a police officer?
5
How must undercover police officers identify themselves?
3
Can a civilian legally take any action against a police officer if they witness the officer violating traffic laws?
6
Can a US President give police a “kill order”?
8
Does a citizen have to open the door to UK police if they do not give a reason?
4
Are plain clothes police officers allowed to use force to make an arrest?
0
What is the point of administering prolonged field sobriety tests, and aren't the tasks unreasonable?
6
Can a police officer lie?