Can the Prisoner's Dilemma be solved with a civil contract?

The Prisoner's Dilemma is a well-known game theory problem that translates well into our real life experience. The idea is that two people who will optimize their individual and collective outcomes by cooperating can, under specific circumstances, decide not to cooperate.

Can the two prisoners solve their dilemma by mutually binding each other to silence with an enforceable civil contract of the nature of a Non-Disclosure Agreement?

Two members of a criminal gang are arrested and imprisoned. Each prisoner is in solitary confinement with no means of communicating with the other. The prosecutors lack sufficient evidence to convict the pair on the principal charge, but they have enough to convict both on a lesser charge. Simultaneously, the prosecutors offer each prisoner a bargain. Each prisoner is given the opportunity either to betray the other by testifying that the other committed the crime, or to cooperate with the other by remaining silent. The offer is:

If A and B each betray the other, each of them serves two years in prison

If A betrays B but B remains silent, A will be set free and B will serve three years in prison (and vice versa)

If A and B both remain silent, both of them will only serve one year in prison (on the lesser charge). 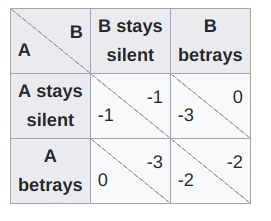 It would not "solve" the problem, because the contract would not be enforceable. See this question on enforceability. In particular, Lachman v. Sperry-Sun Well Surveying Company, 457 F.2d 850

A bargain, performance of which would tend to harm third persons by deceiving them as to material facts, or by defrauding them, or without justification by other means is illegal.

But I do not think that analysis applies because there is no deception or fraud involved. Both parties have a fifth amendment right to not self-incriminate. The agreement would be for both parties to exercise their constitutionally protected rights by remaining silent. Prosecutors often solve this with immunity agreements for "unindicted co-conspirators" plus subpoenas to compel testimony and otherwise cooperation with investigation. However, I don't think that tactic can displace an individual's constitutionally protected right to "remain silent."

The contract is almost certainly not valid. The answer you linked references the 2001 Federal Circuit case Fomby-Denson v. Dept of the Army. The court, in its opinion, quoted from the 1948 Supreme Court case Hurd v. Hodge:

[t]he power of the federal courts to enforce the terms of private agreements is at all times exercised subject to the restrictions and limitations of the public policy of the United States . . . . Where the enforcement of private agreements would be violative of that policy, it is the obligation of courts to refrain from such exertions of judicial power.

It is clear that, in the case you propose, the enforcement of such a contract would go against the public interest. Quoting from the 1972 Supreme Court case Branzburg v. Hayes, the Fomby-Denson decision said:

it is obvious that agreements to conceal information relevant to commission of crime have very little to recommend them from the standpoint of public policy.

It further notes this clause from the First Restatement of Contracts:

[a] bargain in which either a promised performance or the consideration for a promise is concealing or compounding a crime or alleged crime is illegal.

Looking past this existential conundrum, economic analysis would show that to change the equilibrium, the contract would probably have to be at least as harsh as 2 or 3 years in prison for talking or provide a reward worth 2-3 years in prison to work (I say "probably" because were talking about human behavior) and be enforceable.

Enforcability is your bigger issue and a bit hard to answer yes or no. As D M's answer explains, courts will likely not uphold a contract that goes against the public policy. There is also the issue of whistle-blower statues that protect people from retaliation for bringing crimes to light. On the other hand current events have shown that you can buy silence in cases of sexual harrasment, so it's not outlandish to think in certain circumstances paying off a witness is legal and enforceable but certainly rare.

That said to some extent this is what happens with gangs and cartels in the real world. There is a contract. i.e. You forbear from testifying and I will forbear from causing harm to you and everyone you love. I don't think the word "civil" is the best word for this case, and it would not be enforceable in a court of law, but still technically a contract, and usually people making these kinds of contracts operate outside the law.

Not the answer you're looking for? Browse other questions tagged contract-law contract or ask your own question.

16
When can an NDA be legally broken?

1
Is there a name for the part of a contract that specifically deals with how the contract is to be interpreted?
1
Can prices change in the middle of a contract
0
Can a contract remain in effect after it is terminated?
3
Can you reuse the text of a contract you've signed with one party with another party?
0
Annual Contract of employment with the same employer
1
Does a contract modification need all the elements of a contract?
1
Is a term stating the contract can only be changed in writing, valid?
1
Can I leave an organization to bring an end to their contract to work directly with a company?
1
Contract with lack of complete by date?