Transcribing Ancient Manuscripts from Around the World

As a follow-up/clarification to this question, I would like to ask with a little bit more detail.

There are several groups of "ancient" manuscripts and inscriptions which I would like for this to take into account. Here is a list of some of them:

Some of these are owned by places like the Catholic Church, others by places like the British Library, or other Libraries or Museums, even others are held by Universities, and still others are held by private individuals who may post an image online of the artifact for a variety of reasons, like this person did. Also, some artifacts may have been created in one place (like in China), but hosted in another place (like at the British museum).

So the question is about looking at an online image of one of these artifacts, which is provided by one of the owners, and then either drawing a picture to replicate the object (like the image below), or copying it into text form, such as this, which was transcribed from an image of a manuscript, into electronic text.

Specifically, all of the things I am talking about are pre-copyright era, the actual objects themselves. So then someone finds/discovers the item (either they found it pre-copyright era, like 1000+ years ago finding something and putting it in the king's library), or it was discovered post-copyright-starting era. So somebody owns it. I am not concerned with that part. But then they take a picture of it and put it online. Some of the pictures (like the reddit image) are just quickly shot with an iPhone. Others require significant cost, care, and tooling, such as taking a picture of a fragile ancient manuscript, while others require that much cost/care/tooling to startup, but then can be automated for thousands or millions of artifacts (like the Google books project). But in the end, an image of a natural, copyright-free artifact (since it was created pre-copyright era) is online and publicly available.

What you see in this situation often is "this image is copyrighted". To me that means that you can't directly sell the image, or host it on your site/product for commercial gain. But given the content of the image is in the public domain (again, the content from all those cultural resources listed at the beginning) because it was created thousands of years ago, I wonder what you are allowed to do with the image.

I wonder if you are allowed to:

Obviously the drawing wouldn't be a straight copy of the photograph. It would draw the essence of the content instead. So the content is public domain, but the image is copyrighted and the artifact is owned. I wonder if you are allowed to essentially write down in electronic form what is in the manuscript artifact, or in the case of glyphs, to write down the glyphs.

What this would mean is that one could go to a museum website and view their manuscripts, and transcribe them, and then do what you want with the transcription. If that's not allowed, I would be interested to know the reason. 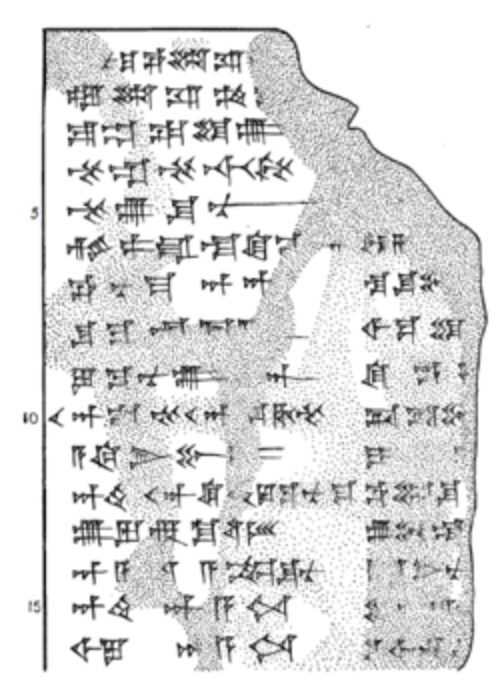 What you're describing is generally permissible in the United States.

If you are strictly transcribing the text of the script, you're not infringing on anything that's copyrighted. If you make a sketch, there's more potential for infringement, but I suspect that you would not be working to faithfully copy the angles of the shadows as much as you would working to faithfully copy the image and condition of the artifact.

Even if you were, calling that a copyright infringement would require that the image truly be copyrighted, and I'm not 100 percent convinced that they would be. Copyright is only available to original works of authorship, and that means that the author has to make some meaningful efforts to create something new out of the copyrighted elements discussed above.

But what has the photographer done in that picture of the Coronation Oath? It appears that they've photographed the book head-on, as it's displayed by the museum, with lighting as provided by the museum, in an effort to recreate the display one would see while visiting the museum. Is that really sufficiently "original" to merit copyright protection that could be invoked to prevent someone from drawing a duplicate? I doubt it.

But that picture of the Ge'ez book may be different. Someone appears to have grabbed the book, opened it up under weird lighting, kept their hands in the photograph, and otherwise actually composed a photograph that may not be particularly artistic, but is nonetheless difficult enough to duplicate that it can be considered original.

So let's be generous to the copyright trolls and assume that the sketch you're imagining is protected. Even then, that only raises the question of whether the copy is a fair use. You haven't said anything about how the hypothetical copier would be using these materials, but I have a hunch that the idea isn't to launch a multimillion dollar merchandising enterprise. If the idea is more academic or cultural, you'd have a better claim to fair use. Again, you can review this fair-use explainer to get a better idea.

Your question adds one non-trivial complication, which is that you are accessing the material via a website. That means there are, potentially, terms of use applicable to such access. As you know, all internet operations involve massive copying, we pages are protected by copyright law, but fortunately web page operators typically grant conditional permission to access a web page of interest. "Conditional" means, you may access the page as long as you abide by certain conditions. There may be a "no transcribing!" term attached to that web page. Webpage TOS's are not, as a rule, just restatements of prohibitions of copyright infringement.

Supposing that the image is of a thing not protected by copyright, and the image itself is not protected (e.g. if the photograph is a US government work), it is still possible that permission to access the web page is contingent on refraining from certain acts.

10
Can you legally reconstruct public domain content from copyrighted works based on public domain works?
5
Is this copyright infringement? Is it fair use? What if I don't make any money off it?
3
Are you allowed to transcribe a copyrighted manuscript?

2
Old Photo copyright
0
How is handpicked.org able to republish and link other people's images? (UK)
1
How does copyright law apply to reusing images from before the 1900s?
0
copyright on patterns in CorelDraw
0
Data copyright for public domain content or natural resources
3
Are you allowed to transcribe a copyrighted manuscript?
0
How does copyrighted material distribution and diffusion work on a legal level?
2
When is an image considered a recreation of another image?
2
Can copyright infringement claims be negotiated without a lawyer?
2
Can the layout of a printed work be subject to copyright?