Use of logo, trademark and brand

Let's say X develops an app that tracks injuries of players who play in the NFL... 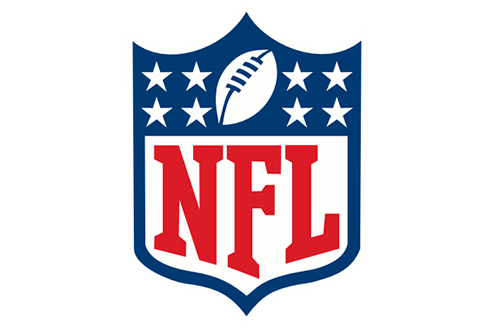 The NFL can prohibit X from using its trademarks, or markings that would be likely to confuse a reasonable person, in any of X's business marketing.

The NFL's shield wordmark has USPTO registration number 4682232 (deep links aren't allowed, but their search engine is here.) The images you've added don't seem alike enough to be confusing to me (I don't think I'd be mistaking one for the other), but in a lot of settings the app name will have only text, not an image. Then you get at the trademark issue for the term "NFL" itself.

NFL can trademark that three-letter sequence, and there are good reasons for them being able to keep control of that trademark to authenticate sourcing. For example, if I said "this hamburger is from McDonalds" you have certain expectations about it based on the brand, and McDonalds the company has a legally protected interest in preventing me from saying that if it wasn't true. I have no right to put that 9-letter sequence on my burger joint without a license from the corporate giant.

Similarly, The NFL has a legally protected interest in preventing somebody from advertising or implying that an information source or the information contained therein is licensed and/or an official source of information, if that's not true. A reasonable person might expect that an information source about NFL player injuries, with "NFL" in its name, would be an official licensed source of that information; the real NFL can seek an injunction and/or penalties if that's not actually the case. "Pro Football Player Injury Tracker" might not carry the same expectation.

At the bottom of NFL.com, they claim, emphasis added, that "NFL and the NFL shield design are registered trademarks of the National Football League." So they have put folks on notice they intend to defend that three-letter sequence as theirs, at least for all subjects related to professional American football.

Sean Mullin says "The NFL is notorious for guarding its intellectual property rights to the full extent of the law." X should probably spend some time with an IP lawyer.

See this prequalification page linked to from this law firm's website, or click "Become a Licensee" here to see that in context.

It seems to me that NFL Injury Tracker might fall under the same use as the Playboy case.

The Court held that nominative use (a type of fair use for discussing the product itself) is permitted where:

The product or service can not be readily identified without using the trademark (i.e. trademark is descriptive of a person, place, or product attribute);

Only so much of the mark may be used as is reasonably necessary for identification (e.g. the words may be reasonably used but not the specific font or logo); and

The user does nothing to suggest sponsorship or endorsement by the trademark holder - which applies even if the nominative use is commercial.

Here, the Ninth Circuit Court applied the nominative fair use test to the defendant and concluded the Defendant’s use of these trademarked items was permissible because there was no other practical way for the Defendant to describe herself.

If someone is tracking injuries in the NFL, I hope a court would find that there is no other practical way to describe the data source than to refer to the NFL. I would think that they should not use the logo at all as this fails the "only so much of the mark may be used" test.

As for number three, confusion was addressed by another answer.

0
Is it a copyright/trademark violation for indirect use of famous brand names in product taglines?

1
Can you use other company's brand or logo in your own marketing campaigns?
1
Acceptable use of trademark or logo for web links
0
Social Media and CC Licensing on copyrighted names or images
0
Legal considerations when choosing a mobile app name
4
Use of Microsoft Trademark in Product Name
2
Should I trademark brand and product names separately?
1
Is it more important to trademark your brand name or your logo?
30
Why register a logo as trademark if copyright protects it?
1
Is it trademark fair use to use company name/logo on your resume?
0
Is it a copyright/trademark violation for indirect use of famous brand names in product taglines?