Would a parking policy which is not posted be contestable in court?

The fine is small, it's more the principal. I recently moved to a new neighborhood. My side of the street has parking, and there are cars regularly parked all along it, at all hours of the day. There are no signs posted regulating parking on this side of the street in any way. Last night I was given a ticket for being parked on the street between 2-6am. I looked up the code for the neighborhood, and the policy is definitely on the books. My argument with this (besides the fact that it is a stupid law), is that I don't understand how they can enforce an un-posted policy. I would understand the implicit expectation of behavior if I, for example, parked on my neighbors front lawn. However, I feel this is different. I've never heard of this type of policy, and everywhere else I have lived, parking rules (ex. snow routes, parking stickers, etc) were always explicitly posted. Is ignorance a reasonable defense in this particular occasion?

So now that I've been here a couple years, I've learned a couple of things. There are one or two signs floating around the entrances to the town. 18pt font and impossible to read. Most likely intentionally

Here is what you see coming into town. Small sign above sign with a hand print on it.

Here is what you see from 15 feet away

I wasn't able to read the sign from my vehicle even once I knew where it was.

I also learned from the locals that this was just the local police hustle for people from out of town. I got about half a dozen more tickets, in the next six months, never paid them and the police just gave up, and found someone else to pester.

This an instance of the general rule ignorantia legis neminem excusat: ignorance of the law is no excuse. If the municipal ordinances state that a particular place does not allow parking at certain times, then if you park there you have violated the law and will get ticketed. There is no requirement that there be signs prominently posted saying that you must obey the law in this particular location. A law might itself require there to be postings, for example speed limit law pertaining to school zones typically are stated in terms of "posted" boundaries. Assuming that the ordinance doesn't have such a "as posted" requirement, you have no legal leg to stand on, and the burden must be shifted to your political leg.

If, for example, you were in Pennsylvania, 75 PaCSA 3353(d) permits local parking ordinances:

Signs are kinds of traffic control devices. Since PA does not statutorily prohibit overnight parking, any local restrictions on overnight parking would require signage. Thus restriction such as this one that "The following vehicles shall not be parked between 9:00 p.m. and 6:00 a.m. on the streets...", applying to commercial vehicles among others, would require a sign. That borough has an interesting ordinance stating that

Generally speaking, local ordinances are subordinate to state law, so this provision is legally questionable (although: the borough does not actually deny the signage requirement, so technically this is not a conflict, it is just ignoring state law – if there is no signage).

The borough could of course argue that they were unaware of the state requirement to post no-parking signs, but ignorantia legis neminem excusat.

This is a matter that varies by jurisdiction. While it is true that in general a law is binding whether a person has been informed of it or not, in many jurisdictions, traffic and parking laws in particular are not enforceable unless they are properly posted, with signs of the size and style specified by statute.

For example, in the US state of NJ (where I used to live) parking restrictions are not enforceable unless they are properly posted, with a sign within a specific distance of the place where the offense occurs, and appear in the duly passed list of municipal ordinances. Municipal speed limits are not enforceable, unless they are duly posted, and listed in the appropriate ordinance, and have been approved at the state level as well. (I was present at several township council meetings where such ordinances were debated and passed, and where the process of getting state approval for local speed limits was discussed. The state did not always grant approval, either.)

As to the reasons for such a law, while that is not strictly on-topic here, there are some. In some areas street cleaning is done late at night, and so parking rules are devised to ensure that there are no parked cars to obstruct the cleaning machines. In some localities such rules help ensure that broken-down, undrivable cars are not dumped on the streets. And in some areas such ordinances are largely a way to raise revenue through tickets.

There are limits to the principle of ignorantia legis neminem excusat (ignorance of the law is no excuse). Secret law is unjust law. In the US, law must be sufficiently clear and specific or it will be held to be unconstitutional for vagueness as a violation of Due process under the 5th or 14th amendments to the US Federal constitution.

No one may be required, at peril of life, liberty or property, to speculate as to the meaning of penal statutes. All are entitled to be informed as to what the State commands or forbids.

That the terms of a penal statute creating a new offense must be sufficiently explicit to inform those who are subject to it what conduct on their part will render them liable to its penalties is a well recognized requirement consonant alike with ordinary notions of fair play and the settled rules of law. And a statute which either forbids or requires the doing of an act in terms so vague that men of common intelligence must necessarily guess at its meaning and differ as to its application violates the first essential of due process of law.

Lanzetta was a case about a law making it a crime to be a "gangster", a term which that law did not clearly define, and imposing a 5-10 year prison sentence on such "gangsters". That is obviously very different from a parking fine. Still the basic principle holds: Ignorance of the law may be no excuse, but if there is no plausible way to learn with assurance what the law forbids, that is an excuse.

Posting a sign is not to only way one might learn of such a law, but it is probably the best way, and any other way must give reasonable notice to those who wish to comply with the law.

My city in Ohio has this same parking ordinance. I got a ticket the first time I parked on the street after having lived here about 10 years.

I asked at city hall why there were no signs and they told me that signs were posted at all major arteries coming into the city. Apparently that is legally sufficient here. I never once noticed any of the signs in that 10 years!

Perhaps entries to your city are similarly posted? 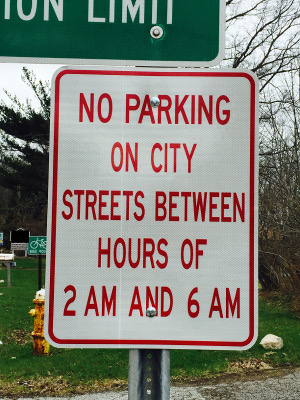 2
Do I have grounds for contesting this parking ticket
1
What is the name of the transverse white line that separates different time-limited parking zones?
0
Street signs and bylaws -- what matters more?
2
Street sign on the same pole: "Pay to park" and "No Stop". Which one applies before the pole, and which one applies after the pole?