If were to be building a video game that I would be profiting off of (through ads or some buying feature), could I use memes that are derivative of copyrighted materials.

There is a currently popular meme called Big Chungus (which can be seen at https://i.stack.imgur.com/MxbBU.png)

It is taken from the Bugs Bunny TV show which I'm pretty sure is copyrighted. This meme, however, has spread through Instagram and the Internet and become frequently referenced. Does this mean it's in public domain and therefore legal to use?

edit: This is different from the linked question because of the reference to frequent use online as noted in the comment.

The image of Bugs Bunny as seen above is directly taken from the show, but another meme, called "Ugandan Knuckles," is a silly likeness of echidna from Sonic the Hedgehog.

In this image, "Ugandan Knuckles" is pictured far right while the others are different likenesses of echidna. 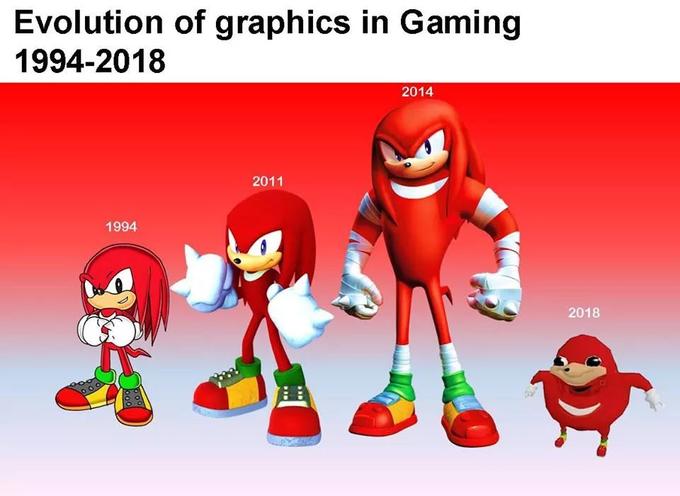 Since this is a silly version and therefore a parody (right?) is it fair use?

edit: Thanks David Siegel for this edit. I believe the commentary Ugandan Knuckles is making is simply to make fun of the original image. Is this a legitimate commentary?

The image of Bugs Bunny is both copyrighted and trademarked by Warner Bros. The modified image linked to from the question (and previously included in it) is certainly a derivative work of the Bugs Bunny image, and is probably close enough to be a trademark infringement as well, if used to advertise or sell goods and services. Therefore using it without permission from the rights-holder (Warner Bros) will be both a copyright and trademark infringement. Warner Bros could and might well sue, obtaining damages. If Warner Bros does not choose to sue, it is unlikely that any government action for criminal copyright infringement would be taken, although if the image were used on a large scale with a profit motive, criminal action could be taken.

Copyright, in particular, is not lost even if many people infringe, and the copyright holder can choose freely which infringements to sue over, and which ones to ignore.

Not the answer you're looking for? Browse other questions tagged copyright trademark legal-research or ask your own question.

0
Can I use the word "Saga" in a video game name?
5
Can I use modified version of Apple, Android, Windows, and Blackberry logos in commercial advertising to show compatibility?
8
Are "slavish copies" of public domain work in the public domain?
1
Popular websites using images from other websites with a link-back to source in the credit
2
When is an image considered a recreation of another image?
0
How can I legally use trademarked entities in my free computer game?
0
How can a game publisher legally "pull their game off" of geforce now?
0
Video game that refers to other games and movies