Which law in China obliges LinkedIn users to confirm their identity before using LinkedIn services?

When I connect to my LinkedIn's account from China, LinkedIn displays the following message:

You must provide a mobile number as primary and confirm receipt of our text. Due to local law, we must confirm your identity before you use our Services.

In some countries, local laws require that we confirm your identity before letting you engage with our Services. You must provide a mobile number and confirm receipt of our text. This phone number will be associated with your account and is accessible from your settings. If you choose to change or delete your confirmed mobile number your ability to access our Services in certain countries (e.g. China) will be blocked until you once again confirm your identity.

You may receive account alerts, messages from recruiters, connection requests and other engagement SMS. You can change preferences at anytime.

If you want to change the bound phone number later, you can go to “Settings”-“Phone Numbers”-“Add Telephone Number”.

If you want to close your account, you can bind your phone number first and then go to “Settings”-“Close Account­”.

Thank you for your understanding and support. If you have any questions during the process of binding your account to your phone number, please contact our Customer Services 400-010-6277.

Which law in China obliges LinkedIn users to confirm their identity before using LinkedIn services? 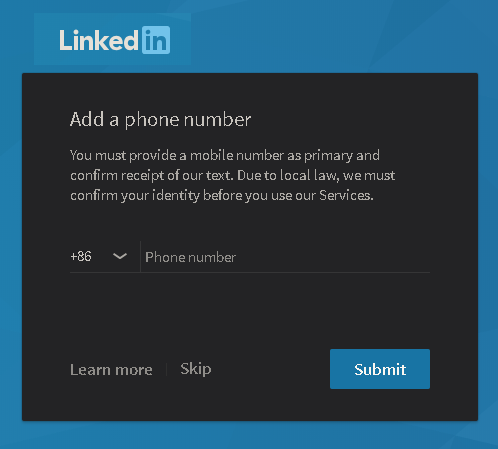 On some pages in LinkedIn's help center (1, 2, 3), they mentioned about China's regulations regarding real name identity verification.

LinkedIn has begun to inform Chinese users that they need add their phone numbers for real-name registration. The professional networking platform says this is to meet local regulations.

Linkedin China has informed all users of the platform that they will be required to comply with new measures requiring real-name registration.

Both articles mentioned the new regulation by internet regulator Cyberspace Administration of China (CAC) on August 25, 2017,

Despite identity verification rules being in place for a number of years, the government has recently moved to further formalize them. On August 25, 2017, internet regulator Cyberspace Administration of China (CAC) announced that unidentified users of all online communities would not be permitted to post content or comment. The regulation is part of the country’s much-discussed Network Security Law, which serves as a framework for consolidating the rules relating to online spaces.

TechCrunch put some more explanation on the new regulation,

China’s crackdown on Internet freedom is getting even more intense. Last Friday, the country’s top Internet censor announced a new set of regulations (link via Google Translate) meant to eliminate posts by anonymous users on Internet forums and other platforms. The Cyberspace Administration of China will start enforcing those rules on Oct. 1.

According to the new regulations, Internet companies and service providers are responsible for requesting and verifying real names from users when they register and must immediately report illegal content to the authorities. [...]

However, looks like the crux of this issue is the real-name identity verification which has been started to be enforced since 2009. Tech in Asia provided a brief history of this campaign since 2009 until 2015. Excerpt of the list:

Disclaimer: not a law expert, nor a Chinese speaker.

Not the answer you're looking for? Browse other questions tagged internet china identification or ask your own question.

6
Are forum users who establish their identity more entitled to protection from libel?
1
Can my user agreement require end users to indemnify me for misuse of their data by third-party services embedded in my app?
3
Are online retailers breaking EU/US law by using user's log-in information to charge different prices without explicitly notifying them?