What order does a court case take place?

I'm doing homework for US Government and there are questions about steps in a Trial but I couldn't find any information that would help me with this online as links I could find didn't clearly explain the order it should go in. What would be the correct order for the screenshot given? 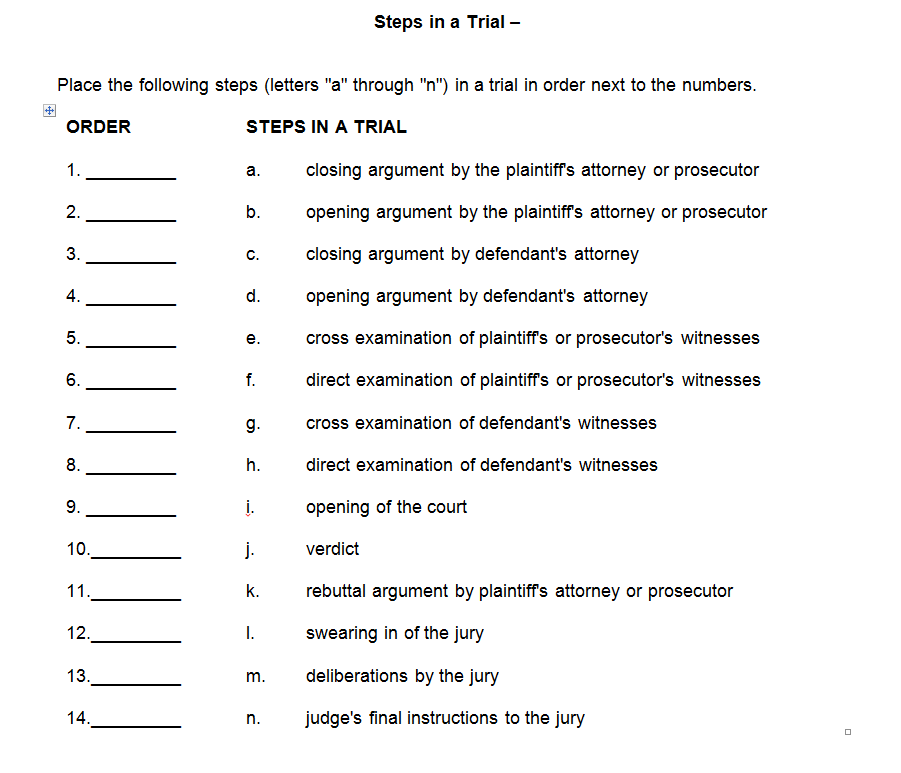 So you can learn and not cheat:

Court refers to all parts of the trial (and is generally personified as the judge. If the judge has to rule about his or herself, they will refer to themselves as "The Court" i.e. It is the opinion of the Court... which can be read as "It is my opinion"

The Jury must first be sworn in as they assess guilt... usually (Bench Trials, i.e. the Judge also does the jury's job are also possible, and the decision to one is the right of the Defendant. It's often referred to as refusing such a right.)

As the Prosecution is making the case and because you cannot defend against something without knowing what you're being accused of, the Prosecution will make the first opening remarks, followed by the Defense*.

After all prosecution witnesses are called, the defense calls its witnesses and the order is held in the same manner (direct then cross).

After this, both sides make closing remarks, and the defense will go first (they have had time to prepare remarks, as this basically sums up their defense. Given that it just happened, it's fresher in the jury's mind, so the Prosection will get the final closing remarks to drive his points home and answer the Defense's arguments.

This is followed by the Judge giving the Jury the final instructions, and the jury is sent to deliberate the guilt or innocense of the defendant. When they finish this, they will read their verdict.

*Note that in the United States and most other Common Law or adversarial court systems, it is the right of the Defendant to not testify to anything... up to and including calling no witnesses and offering no rebuttal to his case... this normally doesn't happen as the prosecution needs to show some evidence in pre-trial that their accusations have merit and they aren't just accusing defendant because they do not like their face... there is a point in the trial where the defense may ask the judge to close the case because the Prosecution hasn't proven a damn thing (Right after the Prosecution rests), though the judge rarely carries the motion. The lack of defense testimony may not be used as evidence of guilt as the defendant need not contribute anything to his/her prosecution.

Not the answer you're looking for? Browse other questions tagged trial or ask your own question.

4
What does “No Order on Count” mean as an disposition of a charge?
4
What does it mean to have a case vacated?
2
Mistake of Law: Requisite of Intent - Distinguishing Nuance
3
Can defense request findings of fact before resting?
2
What is law of the case in the us federal court system for district court judges?
1
Can the victim of a crime throw a court case?