Can "Dumb Starbucks" be legally considered Fair Use as satire or parody?

About a year ago, a new, familiar-looking coffee shop opened in LA. Their reasoning for this was, basically, that it's making fun of the popular coffeehouse chain and is thus fair use: 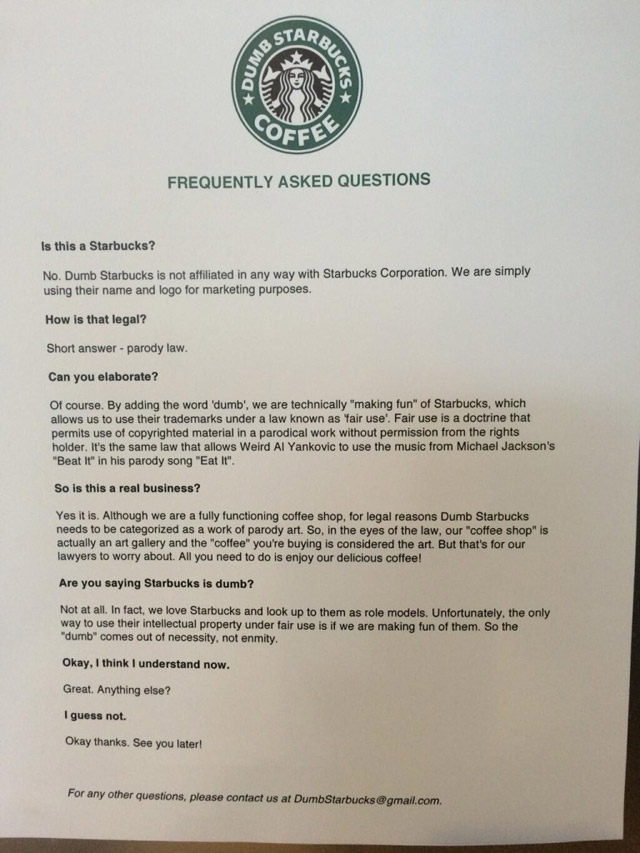 Naturally, it attracted a lot of attention and was later revealed that it was really a publicity stunt created by a comedian, but he still made a statement that "as long as we're making fun of Starbucks, we're allowed to use their corporate identity" (as seen here).

Had Starbucks sued for trademark infringement (which they probably planned to do, but the thing was actually closed for operating without a valid public health permit), would the whole parody as fair use thing hold in court (or at least have some relevance in the case)?

This is likely not fair use. At first blush it appeared similar to things one might see in The Onion (parody print and online newspaper) or other parody publications or shows (SNL, Key and Peele, etc.). In this case, the context would have likely been deemed transformative. However, since they are selling coffee called "Dumb Starbucks" while using their trademark, they would be be found liable if sued. You can parody a trademark brand, so long as the work is transformative such that the use of the brand goes from selling coffee to making a commentary in which the brand itself is relevant.

Amendment I don't think this would pass the test as a parody/commentary. Originally, I failed to notice that they are actually selling coffee. This takes it out of fair use and they would almost certainly lose if sued. If they never sold the coffee, but just had it open as a performance art (like I had originally read this) giving the coffee away to complete the parody, I think they'd be fine. However, they are literally using the Starbucks logo, and selling the same product. This is clearly an infringement of their copyright and not fair use. Sorry for the confusion.

In the UK, it would not be allowed, as the company is selling coffee while making it likely that customers will believe it is Starbucks coffee.

As well as Starbuck being able to take action over the use of their trade mark, trading standards could take action as the company is clearly likely to deceive customers.

Considering their own FAQ (as shown in the question) specifically states that they're only calling it a parody to try to get away using Starbucks' name and logo for the purpose of selling coffee, they almost certainly would not be able to get away with this in court were they sued by Starbucks. They openly admit that their intention is not parody at all, but rather an attempt to get away with trademark infringement. Their comparison to Weird Al's spoof of 'Beat It' is rather absurd, since the value of 'Eat It' is purely comedy, not just an attempt to rip off Michael Jackson's IP to sell records. Also, as a side note, Weird Al gets permission from the people he's parodying before he actually releases a parody (though he isn't legally required to do so thanks to fair use.)

The only thing I can see here that they might possibly be poking fun at, ironically enough, is the parody fair use exception itself (i.e. by trying to make a ridiculous example of fair use.) If that were the intention, though, it isn't a very good parody, since such a use almost certainly wouldn't hold up as fair use.

It is not fair use because they are, in effect, using a variation of the Starbucks logo to sell the same product, coffee, thereby competing directly with Starbucks.

Well, while it might be possible to consider it fair use from the logo's perspective, one could always file a complaint at the Federal Trade Commission or a local consumer protection office since they're, needless to say, tricking customers into thinking they're in a real Starbucks.

Firstly what's in a law and what a judge decides are often only loosley connected.

The first thing I would expect is that using the same mermaid logo would be a no-no, it's too close and would be perceived as deceptive to the illiterate.

Next simply prefixing "Dumb" doesn't distinguish the brand, it would be like using "New" or "Different" it's entirely possible Starbucks themselves would choose to do that (and not our place to decide if they should) so it is reasonable to expect the public to be confused.

Finally, "Dumb Starbucks" it's not even a good parody, I doubt any simpathy could be elicited from a judge if your parody doesn't even strike a bemused smile.

My opinion, close the shop for the day, change the name and logo, try to cover your tracks and if you even smell a Starbucks employee in your shop smile and give them free stuff.

All existing answers have failed to notice one important aspect that's been widely reported in the articles describing the event...

All coffee and pastries were provided free of charge.

So, yes, it would appear that the whole operation was indeed merely a joke and a parody, not meant to be run on a continuous basis. As such, it does appear that the reason they weren't sued had more to do with their goofiness than with the short time during which they've operated the establishment.

Not the answer you're looking for? Browse other questions tagged trademark fair-use or ask your own question.

1
Can you use other company's brand or logo in your own marketing campaigns?

2
Marketing and Fair Use
0
Is printing a personal card using some parts of a board game considered Fair Use?
3
What would constitute Fair Use in a work that is derivative of a parody?
1
Is it considered "Fair Use" to use multiple TV audio clips in a commercial product?
1
Assuming fair use - where do I legally get video content?
1
Is using video games to train computer AI considered fair use?
0
Can ASCII representations of copyrighted images be considered transformative work and fall under fair use?
1
Patent application: can the citation of a figure from another author be considered fair use?