Is it truly illegal for the US Armed Forces to hire someone whose IQ is less than 83?

In this video, Jordan Peterson says that

[...] anybody into the Armed Forces if they have an IQ of less than 83

Is this true? What law is this supposed restriction based on? 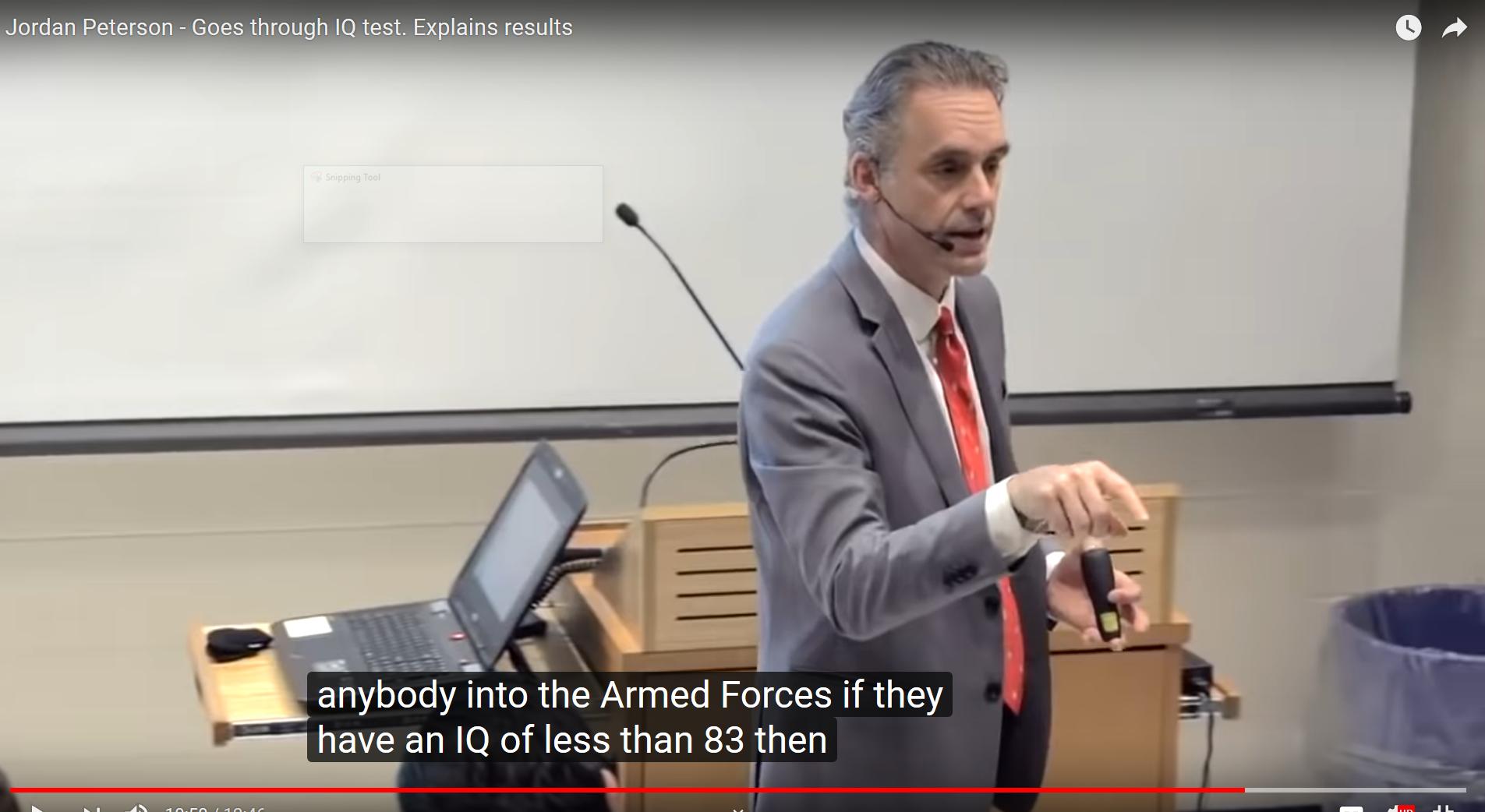 Applicants are required by military regulation to have a percentile score on a standardized test called the ASVAB that is 31 or more, which is roughly comparable to an IQ score on the Stanford-Binet scale of a little bit less than 92, for high school graduates seeking to enter the Army or Navy (other services have more strict requirements and applicants with only a GED or to the national guard must have an ASVAB score in the 50th percentile which is equivalent to an IQ of 100).

But, U.S. law allows the Department of Defense to allow people with a percentile score on the ASVAB that is as low as 10 if it chooses to do so. An IQ score of 83 on the Stanford-Binet scale is the 14th percentile of the general population and is fairly close to a 10th percentile score on the ASVAB, although the conversion is not very exact, because ASVAB test takers have fewer people in the top and the bottom of the IQ range than the general population.

So, the assertion that the law prohibits people with an IQ score of 83 or less from serving in the U.S. military is close to the truth, although the reality is somewhat more complicated.

The U.S. military sets, as a matter of policy in a government regulation at the Department of Defense level, certain minimum requirements for people who seek to enter military services. Some of the main requirements are found here. There are also requirements not described there such as a requirement that people enlisting may not have juvenile or criminal records of a certain severity.

Additional requirements apply to certain military occupational specialties within the military. For example, someone may qualify to be an Army cook, but not to be a military intelligence specialist in the Air Force.

If a person does not meet those requirements, that person is not allowed to serve unless a waiver is obtained from a person with the authority to do so, and even the kind of exceptions that can be made and the factors that must be considered when making an exception on a case by case basis, are specified by a regulation or official pronouncement of the Department of Defense.

ASVAB scores from one year are not necessarily full comparable to ASVAB scores from another year because the test is rescaled from time to time based, among other things, on the scores earned by people who take the test.

For all practical purposes, a Department of Defense regulation has the force of law with respect to an individual applicant seeking to enlist in the military, or an individual recruiter evaluating military applicants.

But, Congress has vested the task of setting exact cutoffs and deciding which tests to use to evaluate applicants in the U.S. military and it changes its regulations from time to time based upon the recruiting targets that it needs to meet to satisfy Congressionally set force sizes, and the quality of the applicant pool, subject to the requirement that no one with an AFQT score of below 31 may enlist without a high school diploma, that everyone that enlists must have an AFQT score of at least 10, pursuant to 10 USC 520, AND that no more than 20% of enlisted soldiers may have an AFQT score below 31.

IQ scores are scaled with a Standard Deviation of either 15 (Weschler) or 16 (Stanford-Binet), and a mean of 100 for the general population. In a 16 point standard deviation IQ test, the 30th percentile is an IQ score of 92 and an IQ score of 83 is the 14th percentile.

For comparison's sake, an IQ score of 70 is normally considered developmentally disabled (a.k.a. mentally retarded).

The minimum IQ score for entry into the military according to Congress would be considered a bit "dull", but within the range of ordinary self-sufficient people in the general population.

The minimum IQ score for entry into the military by current regulations of about 92 would be within the "normal" range of 90-110 that includes about half of the general population.

UPDATE (September 26, 2019): While this is a law that the U.S. military is duty bound to honor, it isn't at all obvious that anyone, with the possible exception of Congress or at least a majority of one house of Congress, would have standing to bring a civil action in court to enforce this requirement. To have standing one would have to show an actual injury from the violation to you personally, and that in turn, would be extremely hard to show in a casual manner. Generally speaking, however, mere statistical evidence of some actual injury to you on average is insufficient. One could imagine a case where a low IQ person's mistake harmed a fellow soldier, but it would be almost impossible in practice to segregate the IQ contribution to the mistake happening to myriad other facts that could also have led to the mistake (e.g. insufficient training).

It is not true for a few reasons. First, the number is 81, sort of. 10 USC 520 specifies a minimum 31st percentile on the Armed Forces Qualification Test; see this Q&A for an analysis of the relationship between IQ and AFQT. The law is not stated in terms of IQ, it's based on a different test. However, this addresses enlistment, not civilian employment by the armed forces. There is no law prohibiting civilian employment of people who don't test well; the relevant question would be whether the individual has useful skills.

Yes, Jordan Peterson is fairly accurate. Look up "Project 100,000" AKA "McNamara's Morons" which tried to enlist 100,000 low IQ men into the Vietnam war. It turned out to be cruel and disastrous because war requires clever soldiers to survive and win. Low IQ soldiers had tragic casualty rates and they were often a bigger liability than they helped. For example, one low IQ soldier shot an officer because he answered a question wrongly. Here's a good video that talks about this.

Not the answer you're looking for? Browse other questions tagged united-states is-x-legal military or ask your own question.

7
Can fiction "fail" to be defamatory if it is "less bad" than the actual facts?
0
In the US if there's loophole in a CFR does it go to the challenger?
10
What happens if Congress declares war, but POTUS refuses to fight it?
2
Sham contest- does this work in practice?
3
Can a soldier enforce federal law?
41
Can a soldier refuse to carry a weapon?
5
Would working for another nation's armed forces be treason for US troops?
1
Treason vs being an enemy combatant
4
Can you charge someone with murder for hire if the target doesn't exist?