What happened to bounties in the wild west?

Few things are more emblematic of the wild west era that a wanted poster. Today such a thing is unheard of. I know today there are rewards for information leading to capture of fugitives and bail bondsmen take bail jumpers. I'm sure a straight up dead or alive bounty today would be political suicide (or maybe not), but I am interested in what happened to their legal status. I can image there may be due process issues for dead, but captured alive doesn't seem inherently prohibited.

What is the legal status of the formerly common "dead or alive bounties"? Are they still on the books? were they repealed?, ruled unconstitutional?, limited?, etc....? 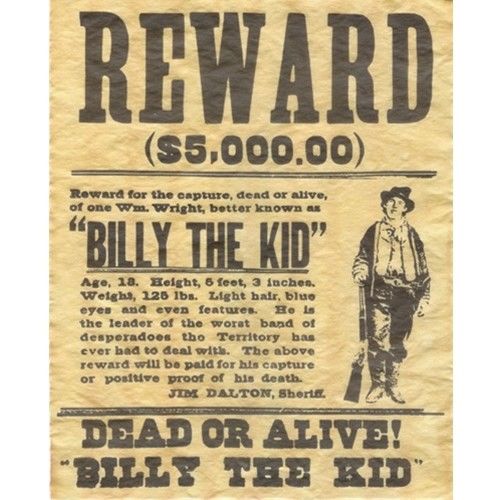 According to True West magazine, no government ever issued a wanted poster containing the phrase “dead or alive”. The iconic posters were promulgated by private organisations railroads, Wells Fargo, Pinkerton etc.

No doubt, if challenged, those organisations would argue that they were simply stating the terms under which the reward would be paid, not encouraging or condoning unlawful killing.

Pre-modern societies had the legal concept of the “outlaw” which meant someone who was outside the protection of the law - they had no rights and anyone could do literally anything to them without legal consequence. It was effectively a death sentence. The legal use of outlaw is different from the colloquial use meaning a criminal.

However, it had disappeared from use under English law (even if it was still theoretically possible) before the split with America and the due process clause would likely prevent its return. It was reintroduced in the Australian colonies to deal with frontier bushrangers where a magistrate could issue a warrant requiring a person to present themselves by a stated date or be declared outlaw. Even so, in practice most outlaws were apprehended and tried rather than shot on sight.

They didn't just shoot first even back then. They tried to bring the person in peacefully if they could, but that wasn't always doable. They only thought killing the person was fine if he/she presented a threat, not just if he/she was a fugitive.

The rules were definitely more lax back then, but that is just the interpretation of the people enforcing them. If an officer sees you speeding, he doesn't have to write a ticket. In the eyes of most people, a few miles over is OK, while a lot over is not. Officers still kill some fugitives today, but they are a lot less willing to do so.

Today, we consider that to be barbaric, in most instances. Largely, that is because we read the due process clause of the fifth amendment to mean that defendants deserve to have the opportunity to defend themselves in court. https://www.law.cornell.edu/wex/due_process

If you just killed someone when you found them it would take away their "day in court" and you might be shooting an innocent man, so most people don't want to kill someone without proof they committed a crime.

Not the answer you're looking for? Browse other questions tagged united-states criminal-law due-process or ask your own question.

1
Would what happened in South Park (human centipede) be legal?
5
Is there any “delik aduan” like laws in the west?
1
When is a trial considered to have happened vis-a-vis double jeopardy?
20
What is the meaning of “Individual-1”?
1
s 4(3) Theft Act 1968 — Why is picking wild produce on another person's land not theft?
0
Although there are conflicting claims about what happened on June 4th, 1989 in Tiananmen Square
6
What ever happened to the Nixon Pocket veto case?
0
What happened with daniel hogan´s space dive prosecution?
3
Are the courts open when the law library is closed?