What is the legal difference between loitering and loafing?

No soliciting is obvious. However, loitering and loafing are nearly synonymous in dictionaries. I have to assume there is a difference between the two. Why else would both be listed?

Is there a legal distinction between loitering and loafing? 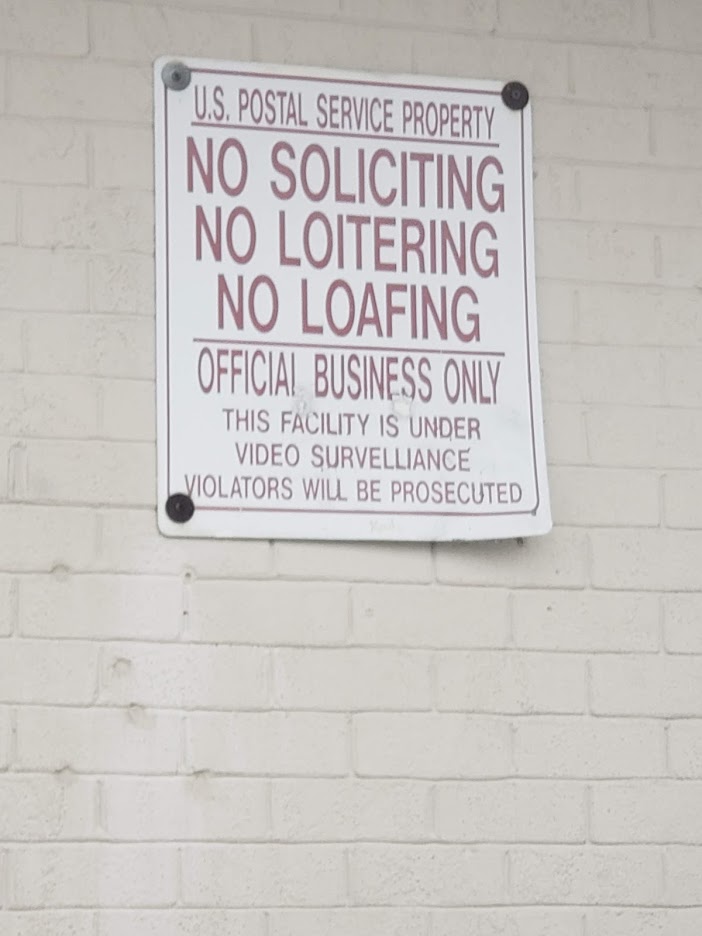 In most states or localities "loitering " has a specific statutory meaning. For example in Prince Georges County. MD Section 14-139.03 provides:

(a) In this Section, "loiter" means for a person to:

(1) Remain on a public street, sidewalk, or pathway, including one privately-owned but used by the public in general, so as to obstruct the free passage of a pedestrian or vehicle after a regular or special police officer has notified the person that the action is unlawful and has requested the person to move;

(2) Remain in or on a vehicle on a public street, sidewalk, or pathway, including one privately-owned but used by the public in general, so as to obstruct the free passage of a pedestrian or vehicle after a regular or special police officer has notified the person that the action is unlawful and has requested the person to move;

(3) Refuse or fail to leave a private business, commercial establishment, or parking lot that is posted with conspicuous "No Loitering" signs if the business or establishment is not open for business, and the person has been requested to leave by the owner, the owner's agent, or a regular or special police officer, unless the person:

(A) Has written permission from the owner, lessee, or operator to be present; or

(B) Is window-shopping under conditions and at a time of the day or night that would be considered conducive to that activity;

required all men between the ages of 18 and 50 to be “habitually and regularly engaged in some lawful, useful, and recognized business, profession, occupation, trade, or employment until the termination of the war.”

This was passed during World War I (1918) and the then NY Governor said:

The purpose … is to force every able-bodied male person within the State to do his share toward remedying the conditions due to the present shortage of labor.

This is confirmed at https://andrewchernoff.wordpress.com/tag/anti-loafing-laws/

I don't know if it was ever challenged on constitutional grounds.

Other than that, I cannot find any published law defining loafing.

The Virginia penal system seems to have rules against loafing and loitering, in Powhatan correctional center:

No loafing, loitering, or crowding around the Dispensary, Medical areas...

There will be no loafing or loitering in the weight room

and the Northern Correctional facility of West Virginia

NO loafing WILL BE permitted in any corridor area...

Loafing on the stairs WILL NOT BE permitted.

Also some city with a city code section 14-42 had an ordinance against loitering, loafing or idling.

14-801 It shall be unlawful for any child under the age of eighteen (18) years to wander, lounge, loaf, loiter or play in, about, or upon any public street, alley, sidewalk...

and 14-802 also prohibits parents etc. from letting their children do same – loafing, lounging, wandering etc. are not defined.

"loitering," or "loiter" means remaining idly in essentially one location, including the concepts of spending time idly, loafing or standing about aimlessly, and also including the colloquial expression "hanging around."

The Lawrence ordinance is a classic case of linguistically-redundant overkill in legal writing, likewise "in, about or upon any public street". Rather than assume the terms are different, I assume they are redundantly intended to cover every imaginable variant of the term "loiter".

tl;dr: there's no distinction in this context. Courts interpret loaf to have the same meaning as loiter.

Was there an ancient distinction?

Linguistically, it's possible. Loiter likely derives from the Middle Dutch for unsteady, loose, or tottering. (The OED's nautical reference to a loitering or shivering sail makes sense in this context.) The origin for loaf is less certain, but the OED gives it a sauntering connotation, which is different. As you allude, they tend to be modern synonyms for idleness. That's partly because the modern Dutch meaning for loiter eventually approaches that of loafing. But the word seems to have entered English usage prior to the transition from Middle to modern Dutch, meaning that it changed as well.

(1) able bodied beggars, common gamblers, drunkards, railers and brawlers, thieves, pilferers, traders in stolen property, lewd persons and keepers of gambling places, who are denounced as such regardless of their financial status, and (2) able bodied persons who are habitual idlers, loafers, "hoboes", who neglect their lawful business, if any, stroll and wander from place to place without lawful purpose or object and who are without means of support or reasonably continuous employment or regular income.

The archaic-language-enabled categorizations parallel the "loitering or strolling" distinction in other statutes, as in Headley v. Selkowitz, 171 So. 2d 368 (Fla. 1965). So it's possible that the loiter–loaf diction is just a linguistic holdover from earlier English law describing shaky people and saunterers.

What is the modern position?

In order to decide cases, courts have to spend time interpreting the language in various statutes. Modern case law on the topic stems from the Supreme Court's decision in Papachristou v. City of Jacksonville, 405 U.S. 156 (1972). There it doesn't draw a distinction between the terms. Other opinions, such as The City of Olathe v. R.E. Lauck, 156 Kan. 637, 640 (1943), affirmatively declare them synonyms: "the terms 'loiter,' 'loaf,' and 'idle' are used synonymously."