How does the 'legitimate interest protected' by exorbitant credit card interest differ from that of exorbitant interest 'on outstanding fees'? 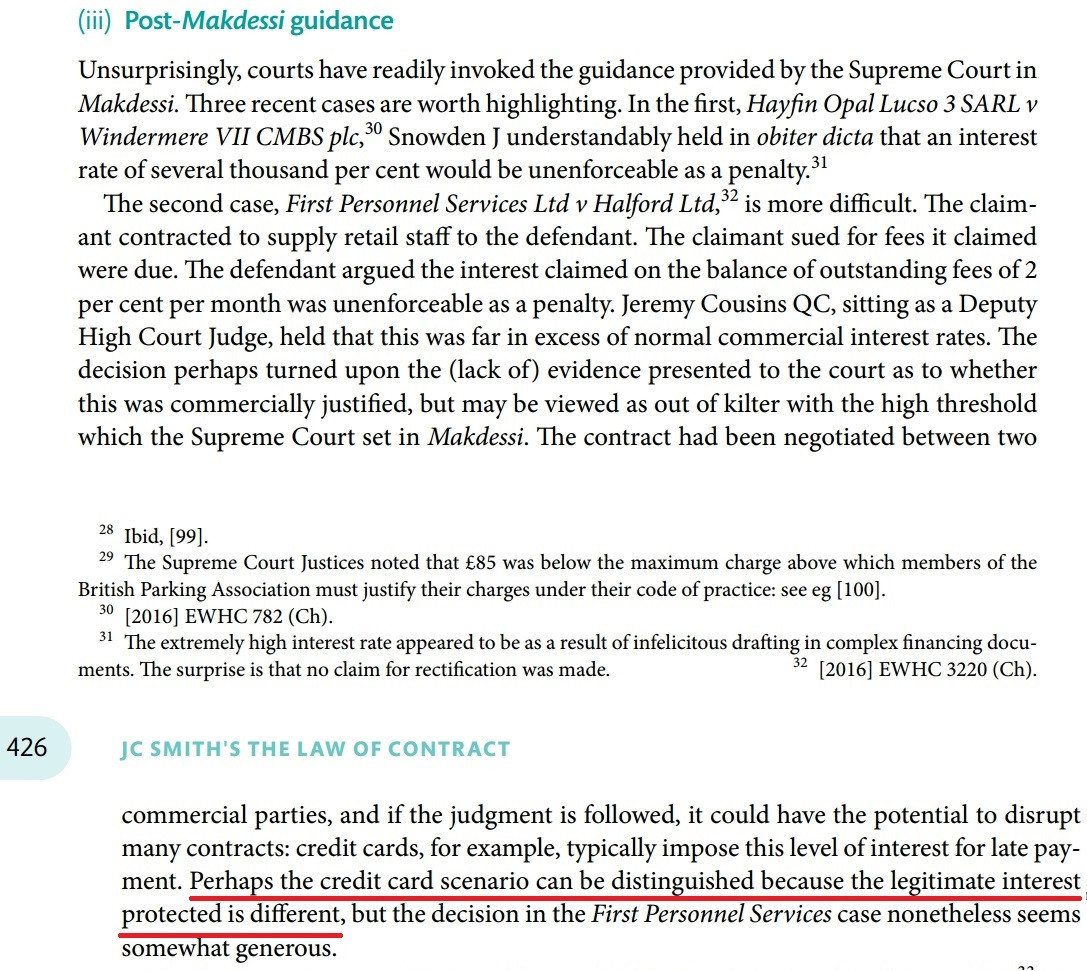 How does the 'legitimate interest protected' by exorbitant credit card interest differ from that of exorbitant interest 'on outstanding fees'?

First Personnel Services v Halfords at 161 points to legal precedent denoting by "legitimate interest" an innocent party's interest "in performance or in some apppropriate alternative to performance" rather than "simply punishing the defaulter" (except where indicated, all quotes here are taken from FSP at 161 and the 4-four paragraph excerpt it reproduces right after that).

The distinction between legitimate and exorbitant does not necessarily or systematically depend on what the parties' primary businesses are. Instead, the question requires understanding first the meaning of "exorbitant" (interchangeably, "unconscionable" or "extravagant").

The notion of "exorbitant" depends on "the circumstances in which the contract was made". The court in FPS also points out that "[i]n a negotiated contract between properly advised parties of comparable bargaining power, the strong initial presumption must be that the parties themselves are the best judges of what is legitimate in a provision dealing with the consequences of breach" (emphasis added, citations omitted).

That "strong initial presumption" may be stricken when "one of the parties to the contract is able to dominate the other as to the choice of the terms of a contract" (citations omitted). In turn, FPS at 163 is indicative that the legal effect of that stricken presumption may be preserved if evidence justifies upholding the remedy. In this case, remedy obviously refers to the magnitude of interest rate.

Thus, it is not that one same interest rate is more (or less) exorbitant merely by virtue of stemming from credit card versus from outstanding fees. To determine whether or not a remedy is exorbitant, the law considers whether that remedy is consistent with "a balance between the competing interests of freedom of contract and protection of weak contracting parties".

I believe that "interest" in "the legitimate interest protected" is in the sense of "right" not in the sense of "interest rate". The author of the text is saying that the right involved in the case of a credit card company which is in the business of lending money at interest, is different from the right involved when a company in the primary business of providing contractors asks for interest on unpaid fees. However, the author criticizes the decision or its possible extension in both cases.

2
Why's A's expected profit $.04?
2
“so long as you remain unmarried”: Why a gratuitous promise in one fact pattern, but a contractual offer in another?
1
Why was 'consideration' embraced to mean 'failure of consideration', when this would be better termed as 'failure of basis'?
1
Why ought a third-party promisee to a contract make his claim in the alternative?
2
Why's it “strange” for a judge to impose voidness on a guarantee?
0
What “former requirement” certainly has no place in estoppel?