I'm in Texas, about to sign a new lease. They've sent it to me to e-sign, and there's no option to submit the lease without signing/initialing something.

I'm not expecting to be part of a class action or anything. I just don't like the idea of waiving my right to it. 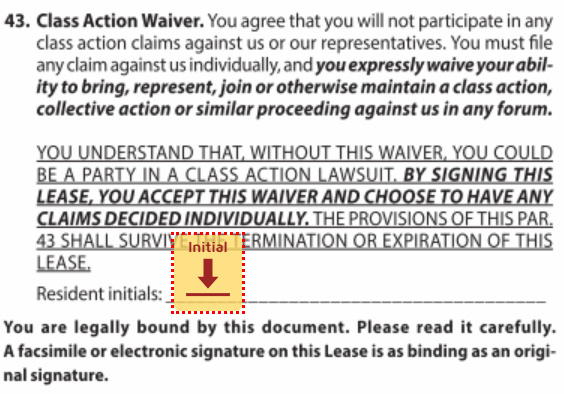 You understand that, without this waiver, you could be a party in a class action lawsuit. By signing this lease, you accept this waiver and choose to have any claims decided individually. The provisions of this Par. 43 shall survive the termination or expiration of this lease.

I saw this question. It's related but not the same--asks about arbitration.

in Epic Systems Corp vs Lewis the US Supreme Court wrote:

The Federal Arbitration Act (FAA) generally requires courts to enforce arbitration agreements as written. See 9 USC §§2, 3, 4. The Act’s saving clause—which allows courts to refuse to enforce arbitration agreements “upon such grounds as exist at law or in equity for the revocation of any contract,” §2—recognizes only “ ‘generally applicable contract defenses, such as fraud, duress,or unconscionability,’ ” AT&T Mobility LLC v. Concepcion, 563 U. S. 333, 339

The US Congress could change this by repealing or amending the FAA, but has shown no indication of doing so to date.

In AT&T Mobility Servs. v. Concepcion, he Court held that individual arbitration provisions in consumer contracts are enforceable and precluded parties to such contracts from bringing or participating in class action litigation.

In Brian Griffoul v. Nrg Residential Solar Solutions the NJ Supreme court held that the Federal Arbitration Act applied to a lease by NJ residents of Solar Power equipment from a Delaware company, and held that a clause requiring arbitration, and one precluding class actions wore valid and enforceable. It wrote that:

The [FAA] and the nearly identical [NJAA] enunciate federal and state policies favoring arbitration" as a mechanism of resolving disputes that otherwise would be litigated. (quoting Atalese, 219 N.J. at 440) Arbitration is fundamentally a matter of contract.

In Epic Systems Corp vs Lewis (May 21 2018) Employees challenged a waiver of class action suits as contrary to the Federal National labor Relations Act's section 7 (NLRA Sec 7). The court denied this contention, writing:

The employees ask the Court to infer that class and collective actions are “concerted activities” protected by §7 of the NLRA, which guarantees employees “the right to self-organization, to form, join, or assist labor organizations, to bargain collectively . . . , and to engage in other concerted activities for the purpose of collective bargaining or other mutual aid or protection,” 29 U. S. C. §157. But §7 focuses on the right to organize unions and bargain collectively. It does not mention class or collective action procedures or even hint at a clear and manifest wish to displace the Arbitration Act.

In another contextual clue, the employees’ underlying causes of action arise not under the NLRA but under the Fair Labor Standards Act, which permits the sort of collective action the employees wish to pursue here. Yet they do not suggest that the FLSA displaces the Arbitration Act, presumably because the Court has held that an identical collective action scheme does not prohibit individualized arbitration proceedings, see Gilmer v. Interstate/Johnson Lane Corp., 500 U. S. 20, 32. The employees’ theory also runs afoul of the rule that Congress “does not alter the fundamental details of a regulatory scheme in vague terms or ancillary provisions,” Whitman v. American Trucking Assns., Inc., 531 U. S. 457, 468, as it would allow a catchall term in the NLRA to dictate the particulars of dispute resolution procedures in Article III courts or arbitration proceedings—matters that are usually left to, e.g., the Federal Rules of Civil Procedure, the Arbitration Act, and the FLSA.

The Court has rejected many efforts to manufacture conflicts between the Arbitration Act and other federal statutes, see, e.g. American Express Co. v. Italian Colors Restaurant, 570 U. S. 228; and its §7 cases have generally involved efforts related to organizing and collective bargaining in the workplace, not the treatment of class or collective action procedures in court or arbitration, see, e.g., NLRB v. Washington Aluminum Co., 370 U. S. 9.

In the article ["Supreme Court Rules in Favor of Employers in Upholding Arbitration Agreements Containing Class Action Waivers"] this case is discussed. The authors wrote:

The Court’s opinion, authored by Justice Neil M. Gorsuch for the majority, resolved three cases that were argued together — Epic Systems Corp v. Lewis; Ernst & Young LLP v. Morris; and National Labor Relations Board v. Murphy Oil USA — in all of which an employee who had signed an arbitration agreement containing a class action waiver sought to litigate Fair Labor Standards Act and related state law claims through class or collective actions in federal court. The Seventh Circuit in Lewis and the Ninth Circuit in Morris had sided with the NLRB and the individual employees; the Fifth Circuit had rejected the NLRB’s view in Murphy Oil. Siding with the Fifth Circuit, the Court’s ruling requires employees who have signed arbitration agreements with their employers containing class action waivers to take their disputes to an arbitrator individually rather than as part of a putative class or collective action.

Even if Congress does not act, the Court’s rejection of the NLRA-based challenge does not mean that class action waivers will now be enforced uniformly. The Court acknowledged the FAA’s statutory exception, which permits arbitration agreements to be invalidated “upon such grounds as exist at law or in equity for the revocation of any contract.” The Court held that exception inapplicable here because it includes only defenses that apply to “any contract” (such as duress or fraud), and the NLRA’s arguable attack only on class action waivers does not offer a general defense to contract enforcement. But general state-law contract doctrines such as procedural and substantive unconscionability have played a greater and greater role in disputes over arbitration agreements, and the Court’s decision does not affect those debates.

This answer is entirely US-Centric. The original question asked about a Texas agreement, and I have focused on the Federal Arbitration Act (FAA), which largely governs such issues in Texas and other parts of the US. But similar issues arise in other countries, and this answer has not considered those.

Not the answer you're looking for? Browse other questions tagged residential-lease texas tenant class-action or ask your own question.

5
Are there surveys on the share of class action settlement that actually goes to the plaintiffs?
4
Class action lawsuits and opting out
3
Clause forbidding class action enforcibility
0
Class action arbitration agreement
1
Its Wrong, But Is It Class Action Wrong?
2
Can a Rental Contract Supersede State Law?
0
Repeatability of class action cases
6
Class Action - which options I have?
1
Could Sargon of Akkad-related compensation claims damage/ruin Patreon?