Is a police car parked perpendicular to the road (with flashing lights) sufficient by itself to legally establish road closure to all traffic?

Is a police car parked perpendicular to the road (with flashing lights) sufficient by itself to legally establish road closure to all traffic -- including non-thru (i.e. local) traffic to a residence which can only be accessed via the "closed" road? There is no additional signage, traffic control devices, or police officers out of the car directing traffic.

Note: Take my research with a grain of salt. I am a legal "enthusiast" and certainly not an expert. I also have a vested interest in proving that such a road is not legally marked as closed since I was ticketed for driving on a closed road in exactly this scenario. Therefore, I worry that my research is biased in that I may have stopped too soon when I found clauses which seem to support what I was thinking when I drove past the police officer's car to my house. Please keep this in mind as you read further as I am interested in the correct legal interpretation of all governing laws rather than what I would like to be true from my relatively limited research into what I think might be the applicable laws.

Police have the authority to regulate traffic via police officers or traffic control devices per 4511.07 of the Ohio Revised Code (ORC).

(A) Sections 4511.01 to 4511.78, 4511.99, and 4513.01 to 4513.37 of the Revised Code do not prevent local authorities from carrying out the following activities with respect to streets and highways under their jurisdiction and within the reasonable exercise of the police power:

A road may be closed by the authority having jurisdiction with posted appropriate signs per ORC 4511.71 at which point it is illegal to drive upon the road. Signs are a requirement listed in 4511.71, therefore it appears it would be inappropriate for a police officer to issue a citation for driving on a closed road due to inappropriate signage unless:

4511.71 Prohibition against driving upon closed highway.

(A) No pedestrian, driver of a vehicle, or operator of a streetcar or trackless trolley shall disobey the instructions of any traffic control device placed in accordance with this chapter, unless at the time otherwise directed by a police officer.

No provision of this chapter for which signs are required shall be enforced against an alleged violator if at the time and place of the alleged violation an official sign is not in proper position and sufficiently legible to be seen by an ordinarily observant person. Whenever a particular section of this chapter does not state that signs are required, that section shall be effective even though no signs are erected or in place.

Now, if the police car parked perpendicular to the road with flashing lights is to be argued as a "traffic control device", it must conform to the state manual (Ohio Manual of Uniform Traffic Control Devices [OMUTCD] 2012 Edition) per ORC 4511.11:

(QQ) "Traffic control device" means a flagger, sign, signal, marking, or other device used to regulate, warn, or guide traffic, placed on, over, or adjacent to a street, highway, private road open to public travel, pedestrian facility, or shared-use path by authority of a public agency or official having jurisdiction, or, in the case of a private road open to public travel, by authority of the private owner or private official having jurisdiction.

(D) All traffic control devices erected on any street, highway, alley, bikeway, or private road open to public travel shall conform to the state manual

Per 6I.05 01 of OMUTCD:2012: "Emergency-vehicle lighting, however, provides warning only and provides no effective traffic control".

CHAPTER 6I. CONTROL OF TRAFFIC THROUGH TRAFFIC INCIDENT MANAGEMENT AREAS

Section 6I.05 Use of Emergency-Vehicle Lighting

Therefore, I am left with the conclusion that as long as an individual slows down to pass the perpendicularly parked police car (in accordance with ORC 4511.213) in this scenario to reach his or her residence which is not blocked by the road obstruction, then the individual should not be ticketed for driving on a closed road (ORC 4511.71 quoted above) or failure to comply with police or traffic control instruction (ORC 4511.12 quoted above).

4511.213 Approaching stationary public safety vehicle displaying emergency light. (A) The driver of a motor vehicle, upon approaching a stationary public safety vehicle, emergency vehicle, road service vehicle, waste collection vehicle, vehicle used by the public utilities commission to conduct motor vehicle inspections in accordance with sections 4923.04 and 4923.06 of the Revised Code, or a highway maintenance vehicle that is displaying the appropriate visual signals by means of flashing, oscillating, or rotating lights, as prescribed in section 4513.17 of the Revised Code, shall do either of the following:

(1) If the driver of the motor vehicle is traveling on a highway that consists of at least two lanes that carry traffic in the same direction of travel as that of the driver's motor vehicle, the driver shall proceed with due caution and, if possible and with due regard to the road, weather, and traffic conditions, shall change lanes into a lane that is not adjacent to that of the stationary public safety vehicle, emergency vehicle, road service vehicle, waste collection vehicle, vehicle used by the public utilities commission to conduct motor vehicle inspections in accordance with sections 4923.04 and 4923.06 of the Revised Code, or a highway maintenance vehicle.

Is there another law I am missing which contradicts my conclusion that a road in this scenario is not legally marked as closed? 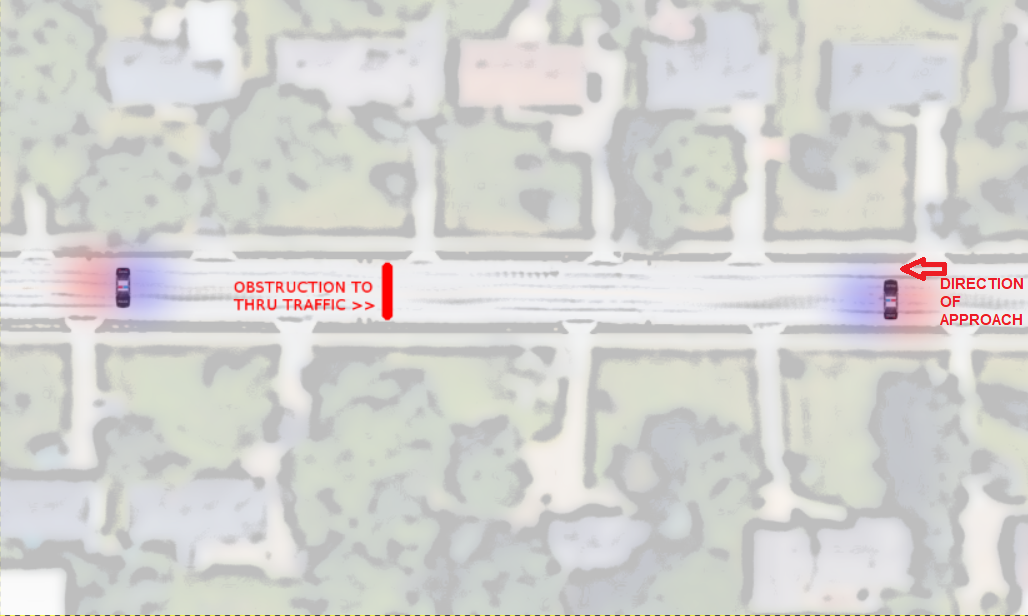 4511.71, "driving on a closed road", doesn't apply here: it requires that the closure be done using a sign, rather than a generic "traffic control device". It also appears to be intended to apply specifically to construction closures, not closures in general. However, what you describe is, at a minimum, a violation of:

(A) Upon all roadways of sufficient width, a vehicle or trackless trolley shall be driven upon the right half of the roadway, except as follows:

(EE) "Roadway" means that portion of a highway improved, designed, or ordinarily used for vehicular travel, except the berm or shoulder.

(1) When the vehicle or trackless trolley overtaken is making or about to make a left turn;

(2) Upon a roadway with unobstructed pavement of sufficient width for two or more lines of vehicles moving lawfully in the direction being traveled by the overtaking vehicle.

In short, the road is "closed" in the sense that there is no legal way for you to drive past the police car. And it doesn't really matter which offense you're charged with: all three are classified as "minor misdemeanors", carrying the exact same penalties.

As a general rule in the United States, you should obey Police Commands before regular rules of the Road. The presence of a police vehicle with lights on obstructing the flow of traffic is enough of a sign that the officer does not wish you to proceed past the point of the obstruction as there is some sort of situation they are managing... be it a road obstruction, a pursuit of a suspect (especially if the suspect is armed or disregarding traffic safety), or other reason to block the road due to higher than normal pedestrian traffic or high risk target being moved through the area (As someone in the D.C. area, any time the President or the Vice President needs to go some where locally, the roads for several different planned routes are shut down and all traffic is stopped until the route is clear. Local police, not the secrete service have this authority.) or a crime scene or accident investigation. It could even be the officer is in the process of erecting the signage for instructions.

Not the answer you're looking for? Browse other questions tagged police traffic ohio or ask your own question.

3
Emergency vehicle laws in the United States
5
In Victoria are the police allowed to speed to pull over a car that is not attempting to escape from them?
4
What law determines when you have been ordered to pull over for a traffic stop?
5
Can a civilian legally take any action against a police officer if they witness the officer violating traffic laws?
0
In Ontario, is it legal to step into a seldom-used bike lane in order to ask a car driver for a ride?
2
Hit during traffic stop
0
Is it legal for me to violate traffic rules in a non-emergency situation if traffic flow is stopped?
6
Did the US presidential motorcade contravene UK traffic regulations?
7
Flashing the emergency lights at a vehicle to dim the headlights