In USA, does private property go right up to the international border?

I was out hunting with a friend yesterday, and the land we were on borders Montana. We were keeping on the North side of the barb-wire fence we assumed was the border, but then we found one of the border markers, about 25m south of the fence. It occurred to me after that the fence would have been at the edge of the Canadian landowners property, and the land between the fence and the border was a road allowance on crown land for a road that is yet to be built or may or may not be built. 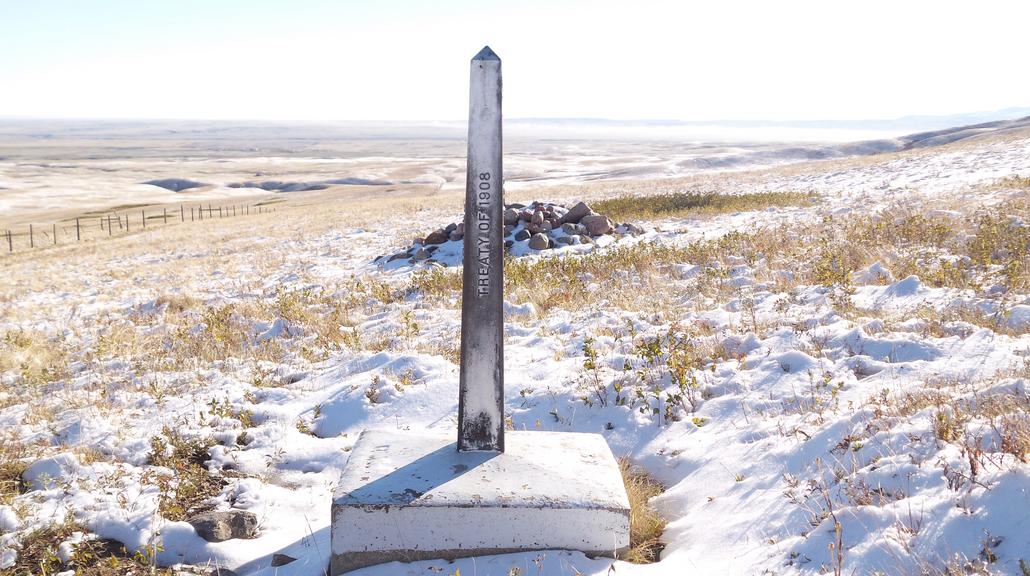 Later that day we met the Rancher who owned the land on the Montana side, he was out herding some stray cattle on his quad, rode over to say hi and we had a friendly chat about the Elk herd that crosses back and forth across the border to and from the Sweetgrass hills. I didn't ask him about it, but it was pretty obvious that he didn't have a fence on the border of his land, and instead relied on the fence 25m inside of Canada to prevent his Cattle from emigrating.

Supposing there's a road allowance on the USA side, this guy is potentially ranching on a strip of land up to 50m wide and a few miles long which doesn't belong to him, half of which is in another country.

If the Canadian rancher were to suddenly tear down his fence, it would force the USA rancher to put up one on his side, which would potentially lose him about 20 acres of grazing land per mile of fence (10 acres in Canada, and another 10 in USA if he has to leave room for a road allowance).

What are the legalities here? Obviously the Montana rancher is using Canadian land, but where is his fence supposed to be? Should it be right on the border? Or is there a strip of land there which is national land reserved for border patrol purposes?

Or is there a strip of land there which is national land reserved for border patrol purposes?

There is a six-meter wide "border vista" under the authority of the International Boundary Commission. (Six meters is a bit less than twenty feet.) The Commission is headed by two commissioners -- an American and a Canadian. If you own land within the vista you need permission from the Commission to build anything there. That means if a pipeline or a railroad track or a highway or a power line is to cross the boundary, the Commission must sign off on it before it can be built. (A power line would typically not touch the ground within the vista, but the Commission still asserts authority in the matter.) The boundary actually passes through a number of buildings on the border between Vermont and Quebec, which were built before 1925, which I suspect was the year when the requirement of the Commission's approval went into effect (at any rate it's the year when a treaty made the Commission permanent). The Commission owns and maintains the "monuments" that mark the boundary, one of which appears in the photograph in the posted question.

Here is the Commission's web site.

Here is Wikipedia's article about the Commission.

It occurred to me after that the fence would have been at the edge of the Canadian landowners property and the land between the fence and the border was a road allowance on crown land.

This is one possibility, others are:

Obviously the Montana Rancher is using Canadian land, but where is his fence supposed to be?

Well, its not so obvious but anyway: Who says he has to have one? I am not aware of a law that requires a person to fence their property.

Should it be right on the border?

Or is there a strip of land there which is national land reserved for border patrol purposes?

You don't know, I don't know - if you are really keen land ownership is public information; check with the governments of Alberta and Montana.

Not the answer you're looking for? Browse other questions tagged united-states canada international borders or ask your own question.

2
Who has jurisdiction if a crime is committed across an international border?
5
In which circumstances can law enforcement of one country cross the border of another one?
3
US laws requiring US citizens to enter the country at designated border crossings
4
Can you refuse to show ID and give information to Border Patrol agents when not at a international border?
1
Can someone who owns property on the border prevent/delay government related construction?
1
Why does the CBP border zone nearly touch Reno, Nevada?
1
Are there any international laws or rules for returning a dead body after a cross-border killing?
1
Filing a complaint against USBP officials