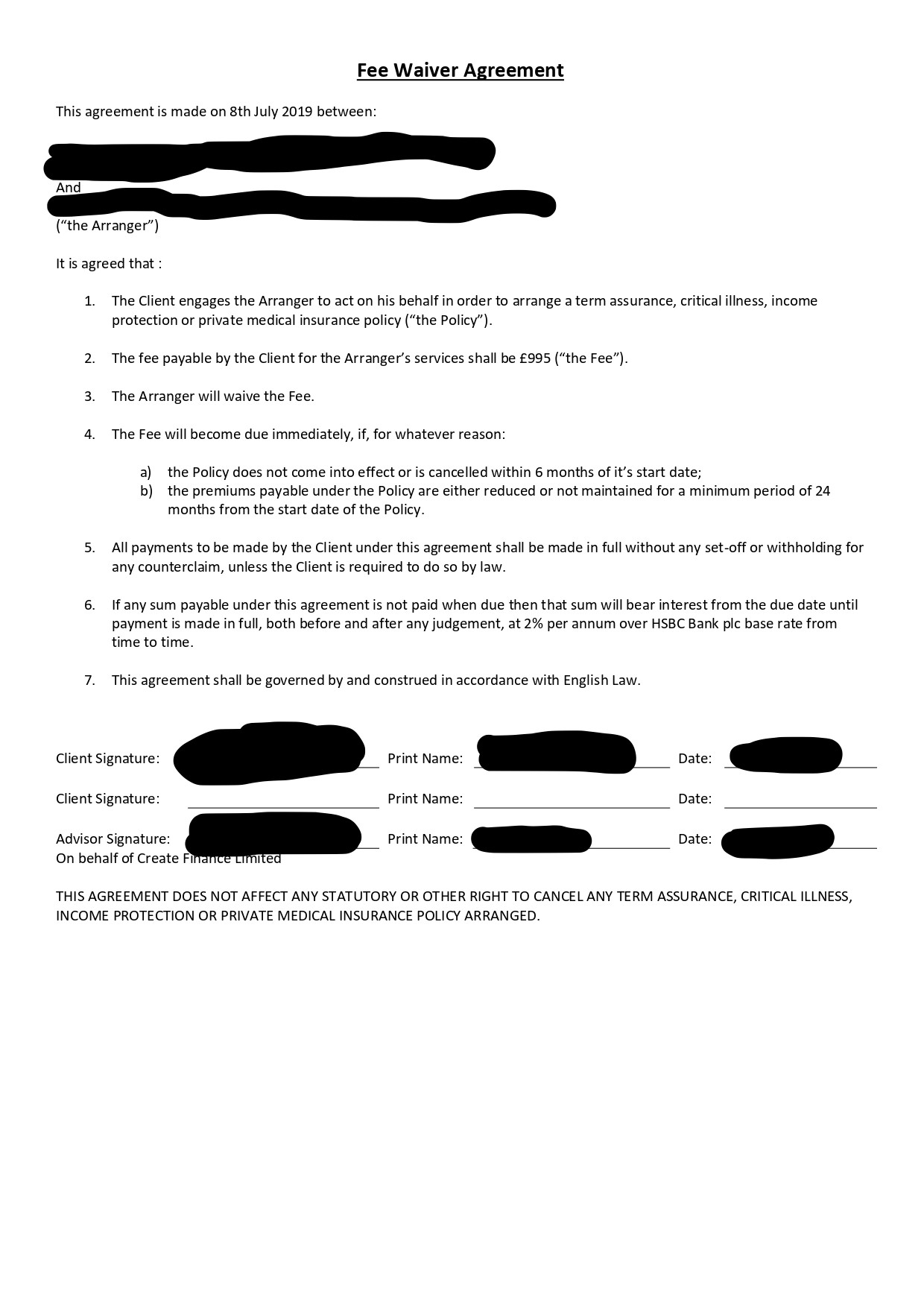 I recently got a residential mortgage with the help of a mortgage broker and one of the contracts I signed was a fee waiver form. This form specifies that if I take out some kind of protection with the broker then a fee that would normally be charged would be waivered.

One of the terms in the contractual agreement was the following:

After taking out the mortgage, the broker has rightly contacted me to arrange some kind of protection. I specified that I wanted to keep costs down and would like to just take out a life insurance policy, which is around £5 per month. However, the broker says that he could not recommend that and says that as a minimum I would need to take out both life insurance and critical illness insurance, which is an extra £20 per month.

From my understanding of the above term, the 'or' implies that I can choose which kind of protection I would like to take out with the broker and I am not contractually obliged to take out both life insurance and critical illness insurance with him. Both of which have been quoted as not the cheapest on the market as the broker only has a range of providers that he can choose from. These providers obviously pay him a commission for taking out the protection.

I've attached the full fee waiver contract so you can check not just this term but the whole of the contract.

The word "or" means "or", not "and", that is, if there is a condition "A, B or C" then the condition is satisfied if any one of A, B or C is true (selected, done). If the requirement is that there should be at least two of these conditions satisfied, the contract would have to say "any two of...", and if all of the conditions had to be satisfied, the contract would have to say "and". There is a sloppy rule of legal interpretation where "and" is interpreted as "or" and vice versa, when the context requires, but the context does not require such an interpretation (that is, it is perfectly sensible to interpret "or" as literally meaning "or").

The contract does not say who gets to decide which of the listed options shall be implemented: the contract is vague (not actually ambiguous). Still, in interpreting boilerplate contracts, the courts tend to favor the customer over the contract-drafter in interpreting what such a clause means. The drafter could have written the contract in such a way that it was clear that the arranger is the one who decides; they didn't, so it doesn't mean that the broker gets to decide. You may choose (you may need to hire an attorney to make this point forcibly). The legal doctrine of contra proferentem is on your side, and nothing in the contract says that the Arranger gets to decide. It does say that the Arranger is engaged to act on your behalf (not his own or a third party's behalf).

Not the answer you're looking for? Browse other questions tagged insurance fees mortgage waivers or ask your own question.

4
Is it legal to let sister-in-law drive my vehicle in another state and have her on my insurance?
0
Should my home insurance cover the costs?
0
Life insurance: Primary vs contingent beneficiary percentage amounts
2
How to document mortgage payment arrangement with my partner?
1
Life insurance and declining medical treatment
0
What can a spouse do in regards to controlling the beneficiaries of a life insurance policy in a community property state
0
Can MetLife Override Intestate Succession of Pre-Deceased Beneficiaries