Can a private school legally seize a student's phone in this case? (Philippines)

My School prohibits bringing any types of gadgets

Hi, this morning my school (A private school) declared to us that. Bringing Cellphones will be considered illegal (Yes, even if the phone is just on your bag) Surrendering it to authority will not do (Meaning a TOTAL BAN of phones). I have read about this DepEd Memorandum from 2003 of the Philippines stating that USING (not bringing) phones during class hours is illegal. I knew that law already but the school seizes our phones even if it is not in use. it sparked a small controversy at my school because of this rule that our school just made:

(1) The student may not bring any kind of electronic devices inside the school premises. Bringing such devices will result in stern reprimand with a fine of 500 Philippine peso (or 10 US Dollars).

(2) A student may bring electronic devices given the condition that he/she will pay 500 pesos monthly for the permit.

This part sounds mostly fishy to me since a student will be allowed to bring the desired gadget given that he/she will pay 10 US dollars to be able to be permitted to use. This part does not sound clear to me since the DepEd Memorandum stated that student cannot indeed use gadgets during school hours but the law did not state that we cannot bring our personal devices inside the school premises. 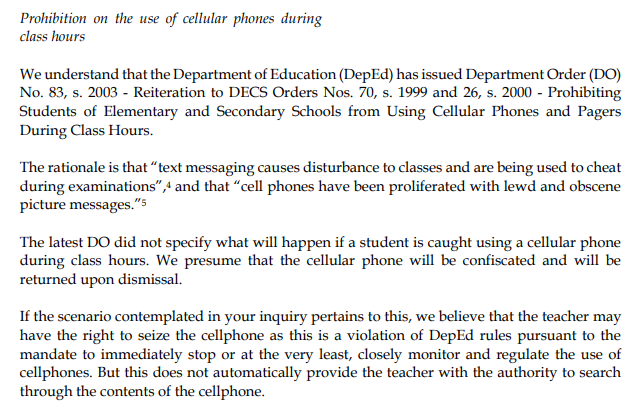 By the way. The Memorandum was both effective for public and private schools. what do you guys think? Thanks for answering.

Browse other questions tagged education school philippines or ask your own question.