I don't understand this law. Surmise that a wild berry shrub grows on my back yard that's unfenced. I don't cultivate it or do anything – no watering. I invite my piano student to my house – thus no trespassing – no watering, and he picks berries from it.

Why does s 4(3) count this out as theft? Isn't it more reasonable for berries to belong me – they're growing on my land!?!?! 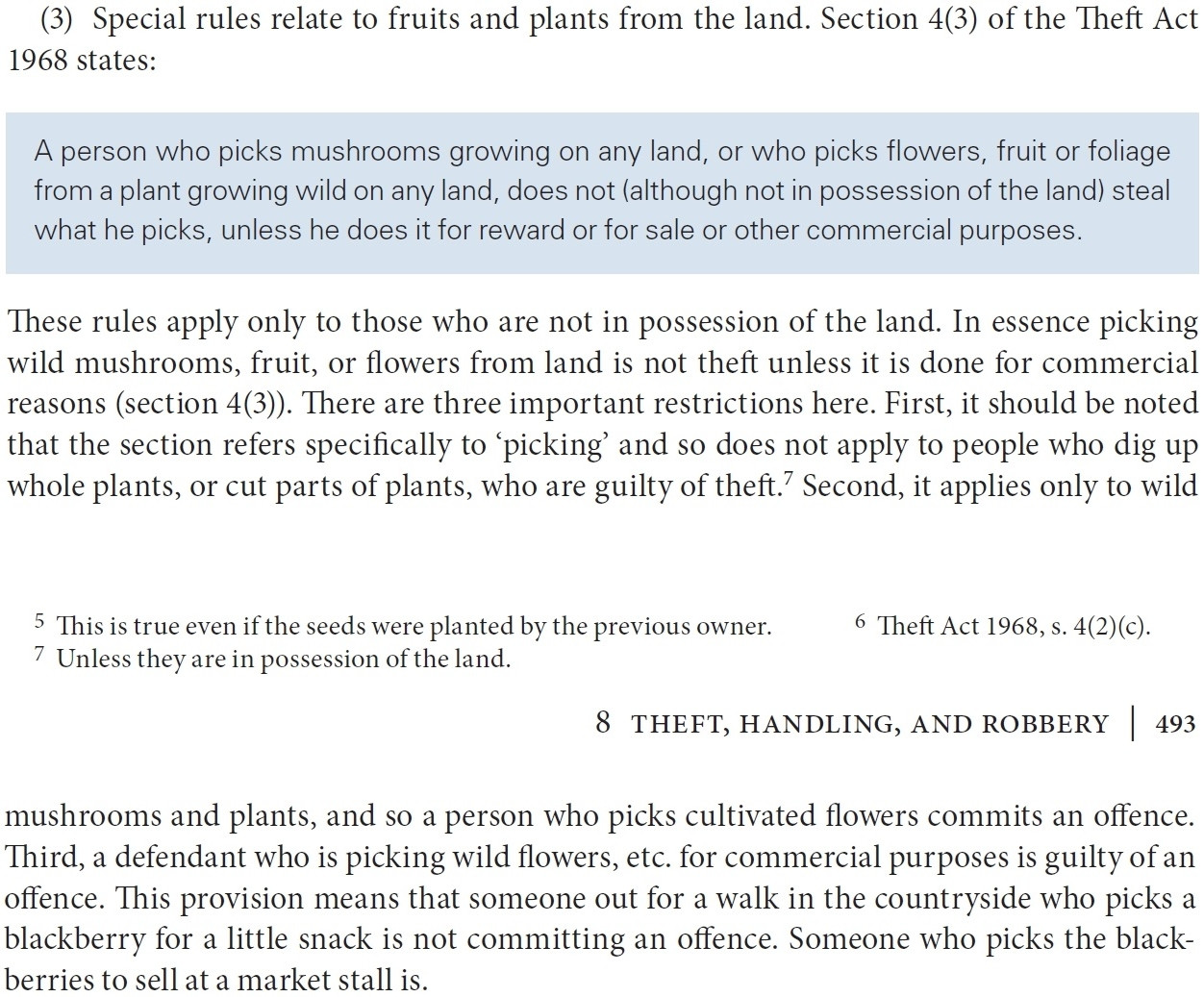 The Theft Act 1968 replaces the Larceny Act 1916, which replaces in part the Larceny Act 1901, ad nauseum. In the current act, the exception is accomplished in the definitions section. Redefinition is a device commonly used by legislatures to clarify intent, where traditional wording does/did not express the desired prohibition. In addition, a special definition excluding a case makes it easier to define the general rule. To be certain, one would need a historical record of legislative discussion (and I suspect that there is no record), but it is reasonably likely that it was not previously against the (common) law to pick a wild blackberry for a snack.

A reading of various prior versions of the larceny statutes suggests that it was never a crime to pick a wild blackberry, instead the crime was taking cultivated goods (which a person put some effort or resources into creating), and destroying resources on a person's land. Those are the kinds of actions explicitly identified in the prior statutes. §4(3) does state a traditional view of "property" (which is why it's in the "property" section), and would have the (presumptively desired) effect without complicating other parts of the statute. Moreover, s1(3)(a-b) of the 1916 act conveys similar "exceptionality".

Appropriation of natural products, including stones, twigs, vegetation etc. with little or no economic value (taken) under the exercise of the legal right to roam is not punished

I cannot provide a reason based on English law, but possibly the explanations provided for the former (until 31.12.1974) German law may assist.

The concept was called Mundraub (Wikipedia, German and Norwegen only).

petty theft (of food) is a colloquial term and no longer used by German law, which had the theft or misappropriation of food or beverage or other objects of domestic use in small amount or of insignificant value for immediate consumption.

Who steals foodstuffs of insignificant value or in small quantities for immediate use.
An abduction committed by relatives of ascending line against descendants or spouses against the other remains unpunished;
...
In cases no. 4. 5. and 6., the prosecution will only be on request.

According to the Bible, there were cases of permitted oral robbery:

And this may very well be the starting point to start searching for the basis in English (or other) laws.

Statues that say X is a crime except if Y are very common.

Why the drafters of the law decided this is off-topic for this site. If I had to guess, it’s probably because collecting wild food was considered a common law right.

Dale M♦Dale M
148k1515 gold badges161161 silver badges286286 bronze badges
6
|  Show 1 more comment
Law Stack Exchange is for educational purposes only and is not a substitute for individualized advice from a qualified legal practitioner. Communications on Law Stack Exchange are not privileged communications and do not create an attorney-client relationship.

5
Is it illegal to spray weeds on another person's land without permission, and thus to harm animals?
2
reduce into possession
1
How does Theft Act 1968 s 4 exclude trade secrets?