Six years ago in 2013 I purchased a leasehold property from Taylor Wimpey. The lease says that the ground rent is £125 and increases with the Retail Price Index every 10 years. It's only been six years, so I was surprised to receive a letter telling me it's going up, based on the RPI in 2008 - 5 years before our house was even built (there are other properties on the same development that were completed years earlier, but ours was completed as we purchased it, in January 2013).

The details of the rent review are detailed in the Eleventh Schedule of the lease: 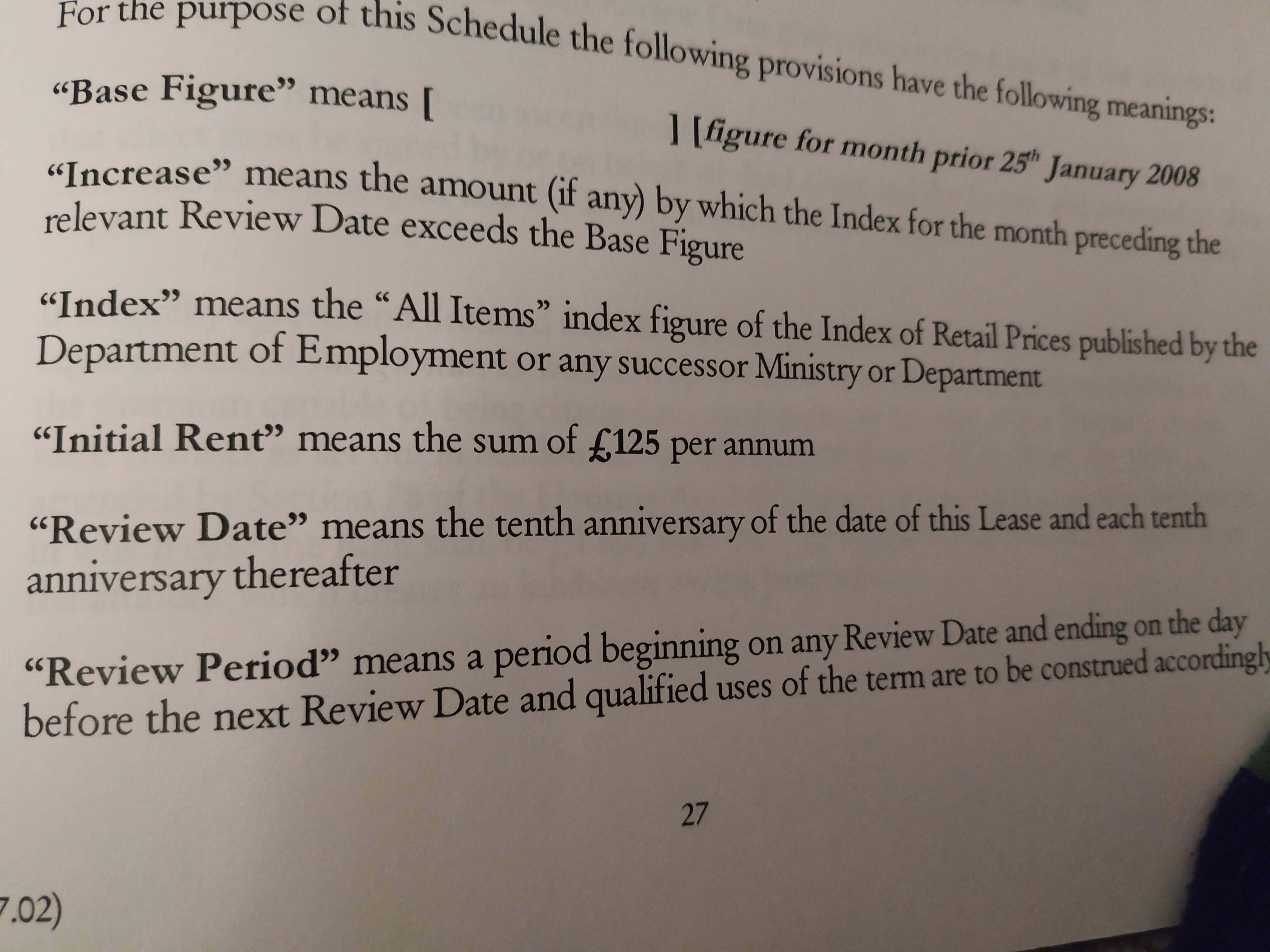 And the front page of the lease says the date is 25th January 2013 (which is around the time the house and our purchase completed): 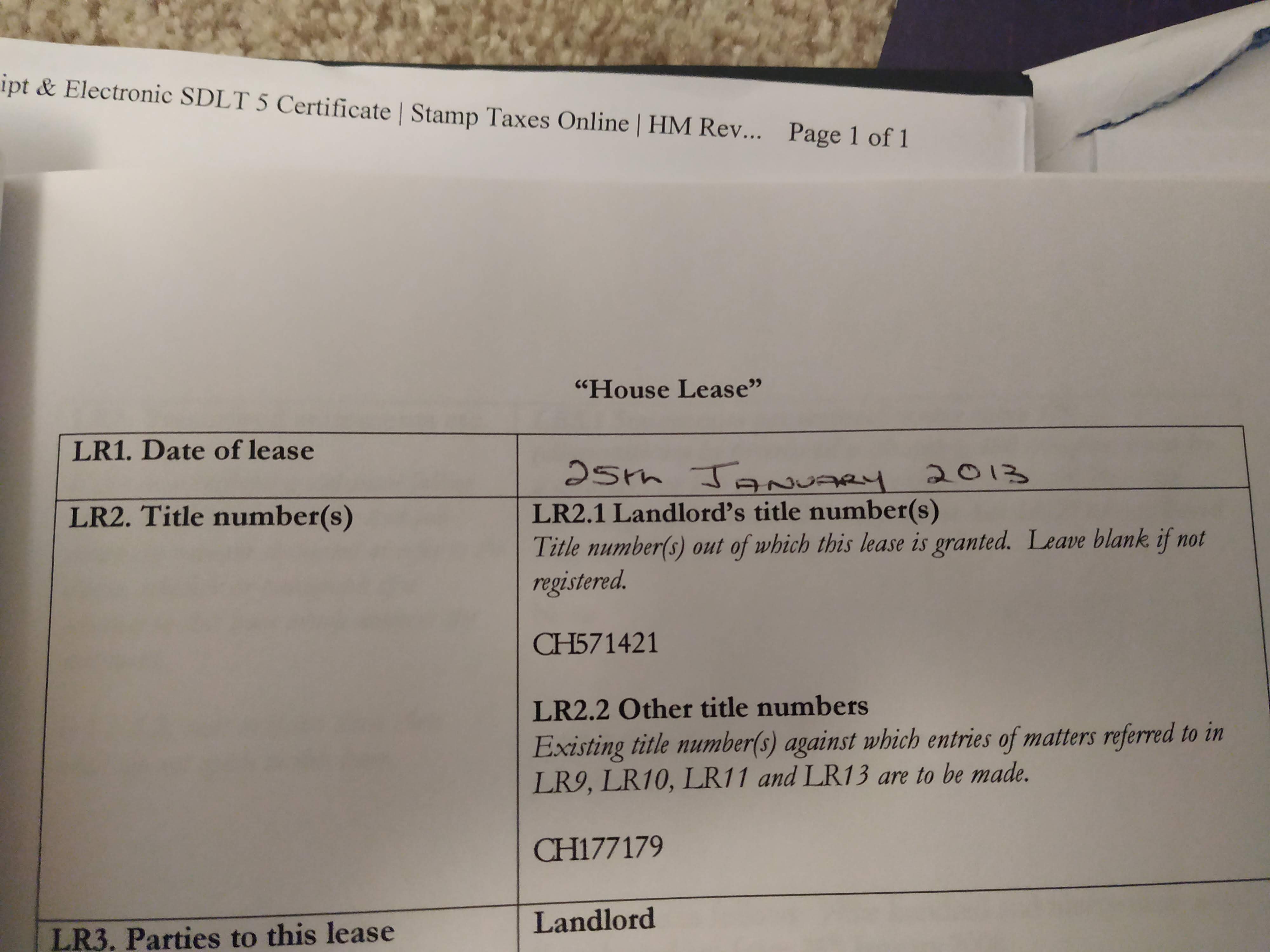 There are other places in the lease that have this same date:

However, there's also a part in the lease that defines the review preiod as 10 years from the commencement date of the lease:

And the date printed as the commencement of the lease, says 2008:

There are other places with the date printed too, which have this date (all printed dates are 2008, but hand-written dates are 2013. 2013 is the date we signed the lease - the property did not exist before then - though the developer did own the land and had built some other properties on this development):

The weird thing is, the company collecting thr ground rent have written to use asking us to sign a letter confirming we agree with the increase - which makes me wonder whether something isn't right here: 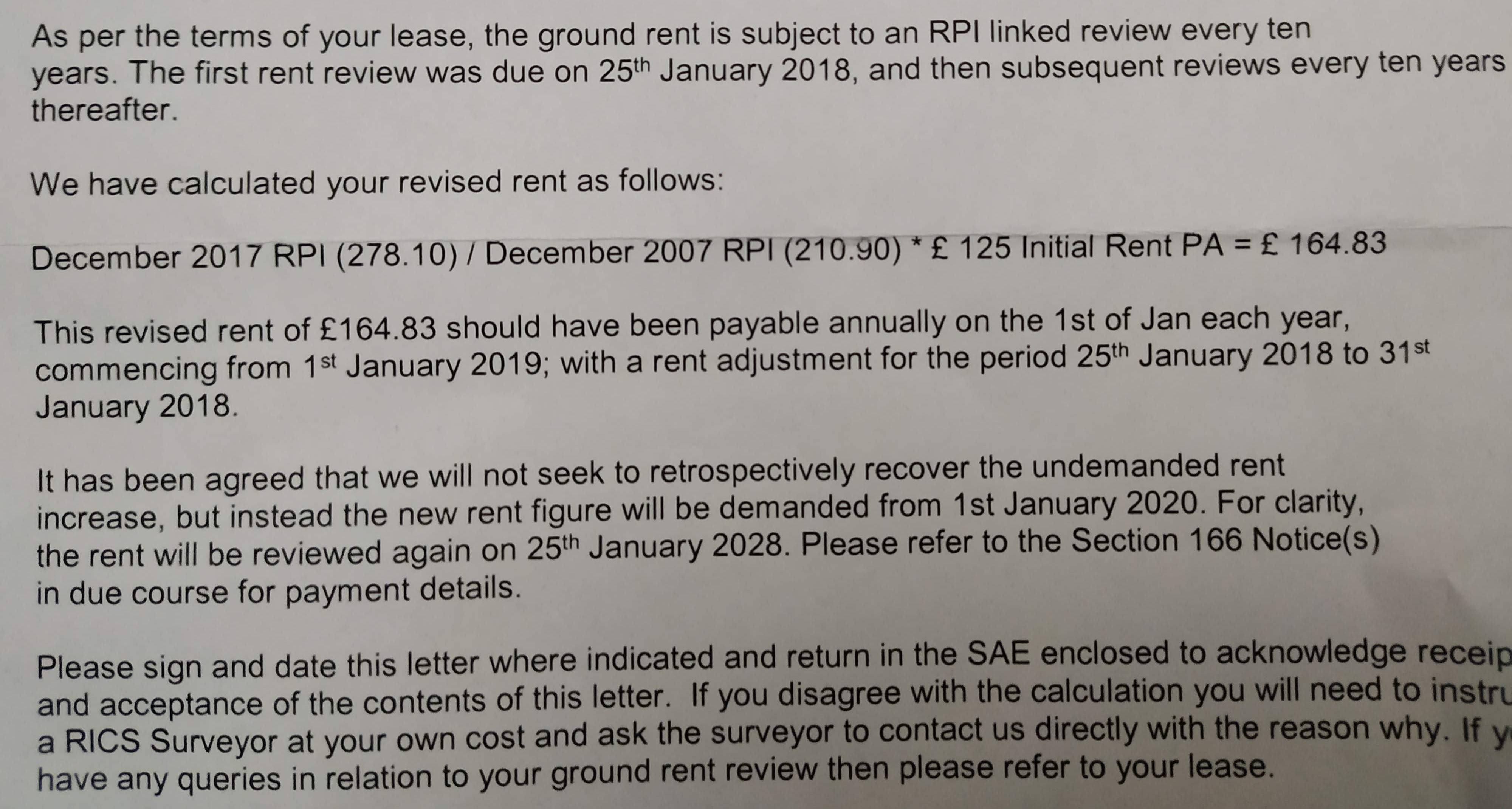 Obviously I'd prefer not to have the rent increase 4 years before I thought it would, and certainly not with 10 years of RPI when only 6 have passed. However I'm unsure what the deal is here. I've reached out to the conveyancing solicitor for our purchase, though I don't expect them to help much unless we pay them (and any legal fees would likely be greated than the increase - at least in the short term). I'm thinking of calling the company and arguing the case, but since IANAL, I figured I should try and collect some other opinions first.

Thanks for taking time to read all this! 😁

Edit: I found these definitions online:

Date of Lease – This is date the lease was created, so generally this is the completion date of the first sale and is found at the beginning of the document.

Commencement date – This is the date that the term of the lease runs from and will often be found in the “Definitions” or following the Term. It may be the same as the “Date of Lease” but is often earlier. This is to ensure that all of the leases (in a block of flats) come to an end on the same day.

So this seems to explain the two different dates. So I guess the real question is whether the review period is from the "Date of lease" or the "Commencement date" - both of which are mentioned above. The "Eleventh Schedule" which specifically mentions the rate changes says the "date of lease", but there's also the other definition which says "commencement date".

Browse other questions tagged united-kingdom lease or ask your own question.

1
Can my landlord force me to stay?
1
Lease: Rent increase legal?
2
Would anything prevent a mortgage fixed to a property, portable between people in the UK?
2
Is there precedent for double dipping after notice to vacate?
1
Any recourse to landlord wanting very early renewal?
41
Is it breach of contract if dismissed before starting work?
0
Lease dispute, over email and text message
1
What is the correct length of time in which a landlord must provide rent increase notices in the UK?
2
Landlord renting parking space he doesn't own - UK
1
Mandatory rent increase in tenancy agreement? (UK)