If the evidential onus is shifted to the defendant to displace the complainant's evidential inference; how isn't the burden of proof reversed? 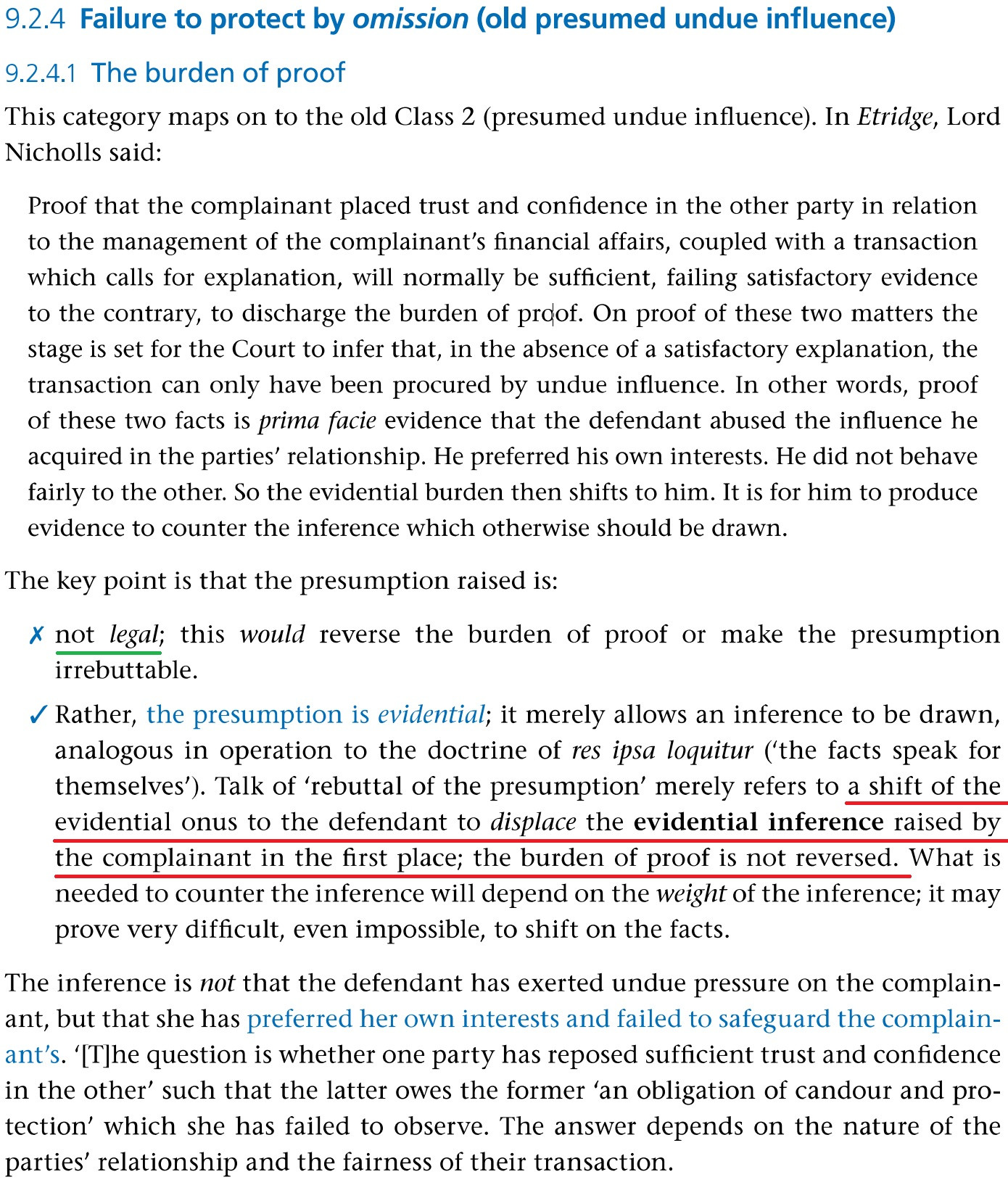 Kindly see the red underline. How can the

be distinguished from 'reversing the burden of proof'?

The answer to your question lies in the text's note that the presumption raised by this evidence is "not legal" and is instead evidential.

Note first that we're talking about proving "undue influence" with evidence of (1) P's trust and confidence in D; (2) a dodgy-looking transaction by D; and the absence of (3) a non-dodgy explanation from D, which do not necessesarily equal undue influence.

An evidential presumption means that if a complainng party puts on evidence of 1 and 2, a jury may make an inference that undue influence occurred, if the defending party does not come forward with 3.

But the jury need not make that inference, even if the defending party inexplicably fails to present any evidence of 3. It might say that P's trust and confidence in D was not so great as to indicate an opportunity for undue influence, or it could say that D's transaction was dodgy but not too dodgy, or it might recognize that 3 exists based on whatever evidence was presented; in any case, it could decline to make the inference.

A legal presumption goes further. It tells the jury, "If you find that 1 is true, and 2 is true, and there is no 3, you must find undue influence." There would be no flexibility to disregard the inference, or to consider other explanations. The presentation of 1 + 2 without 3 would be the end of the case. This is generally considered an unacceptable shifting of the burden because it makes D liable, as a matter of law, for undue influence when undue influence has not been proven.

The analogy is not perfectly clean, but you can think of these burden-shifting analyses like any defense presented in a criminal case.

Police testimony that you were found holding a gun alone by the victim's body just moments after the victim was shot to death isn't direct evidence that you committed murder, but it's damn good circumstantial evidence, and as in almost any other kind of case, a court would instruct the jury that it may convict based on circumstantial evidence alone.

Maybe the jury will just independently conclude that you're innocent, but faced with that evidence, you'd be well-advised to put on some kind of defense, whether it's evidence that your gun doesn't shoot the kind of bullets found in the body, that the cop is a perjurer, or that you were insane.

The scenario from your text would be akin to a statement that if you can't explain why you're standing alone over a dead body with a gun right after the body was shot to death, a jury may find you guilty of murder, but does not need to find you guilty. There could be other problems raised by trying to use this arrangement for a criminal offense as serious as murder, but hopefully it makes the point.

1
What does 'the presumption [of undue influence] is not legal' mean, if being legal reverses the burden of proof or make the presumption irrebuttable?
2
Why could Change of Position 'logically allow lenders to retain a charge for the sum lent to debtors in reliance on the guarantee's enforceability'?
1
How'd parties 'negotiate around the remedy' to 'share the profits (or savings) from breach rather than allow the contract breaker total retention'?
0
Why can the right obtained by giving nominal consideration be less secure, if not negated?
2
Why would contractual damages be superior to returning defective items?
0
Why's it paradoxical that Wrotham Park damages protect the claimant’s performance interest by enforcing a sale of the claimant’s right?