Is it legally allowed to run a red light by make a double right turn at intersection?

I was at the red light in an intersection, the street to my right was a residential undivided street. This car made a curve to that street and turn right out. It wasn't even a U turn. The path the car took is in the diagram. 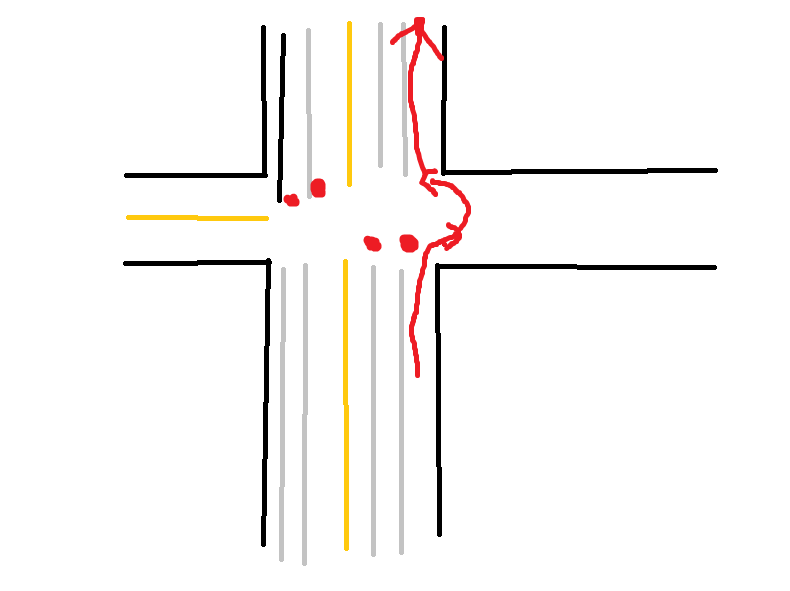 I think it is at best a very jerk movement with no driving manner. Right turn at red light is allowed, but his intention was clearly to get pass the red light.

The route described is probably in violation of Section 22100 of the vehicle code:

Except as provided in Section 22100.5 or 22101, the driver of any vehicle intending to turn upon a highway shall do so as follows: (a) Right Turns. Both the approach for a right-hand turn and a right-hand turn shall be made as close as practicable to the right-hand curb

The approach for the second turn is being made from the middle of the road. Neither of the exceptions apply, as 22100.5 is about U-turns at traffic lights, while 22101 is about turns controlled by markings or signs.

Additionally, since you describe the route as a "curve to the street and turn right out", it's probably in violation of Section 22105:

No person shall make a U-turn upon any highway where the driver of such vehicle does not have an unobstructed view for 200 feet in both directions along the highway and of any traffic thereon.

Since the driver didn't make a complete right turn, it's likely that the forward view of oncoming traffic was partially blocked by the car's A-pillar or even the passenger seat, while the backward view of traffic was limited because none of the car's mirrors was pointed in the correct direction.

It's certainly in violation of Section 22108:

Any signal of intention to turn right or left shall be given continuously during the last 100 feet traveled by the vehicle before turning.

The side road's not a hundred feet wide. There's no way the driver could have given the required signal for the second right turn.

There's a decent chance this is also in violation of Section 22102 of the vehicle code:

No person in a business district shall make a U-turn, except at an intersection, or on a divided highway where an opening has been provided in accordance with Section 21651.

And finally, the catch-all offense of "reckless driving" (Section 23103) could probably be applied:

A person who drives a vehicle upon a highway in willful or wanton disregard for the safety of persons or property is guilty of reckless driving.

No, of course you can not veer into another street to make a turn. You stay within your lane or lanes, if you want to phrase it that way. https://www.dmv.ca.gov/portal/dmv/detail/pubs/hdbk/turns

Not the answer you're looking for? Browse other questions tagged california traffic or ask your own question.

4
Driving through a red after traffic lights have been broken
3
Right of way between U-turning and Right-turning vehicles at traffic lights
2
Right of way: U-turn vs right turn (Illinois)
1
Who has to yield when waiting at the median lane in Florida?
4
Right of way: U-turn vs right turn (California)
2
Can I be fined for the intention to commit a traffic violation, after the police prevented me from carrying through?
2
Crosswalk question regarding entry point into crosswalk