Where would Boulton v Jones (1857) fall, under the minority decision in Shogun Finance Ltd v Hudson (2002)?

Where would Boulton v Jones (1857) 2 H & N 564 fit in the red branch or columns, under the Minority's decision? The author mentioned it on the left in green, but not on the right in red.

Unquestionably not Column 3, because Boulton wasn't dealing face to face.

The courts take a different approach in relation to written contracts. In Boulton v Jones (1857) Jones posted a written order for a hosepipe to Brocklehurst (with whom he had a set-off arrangement and who would not therefore require payment), but, unknown to Jones, Brocklehurst had just transferred his business to Boulton, his former foreman. The court held that there was no contract between Boulton and Jones because Boulton must have known that Jones only wanted to contract with Brocklehurst, the person to whom he sent his order and with whom he had the set-off [I don't replicate book's definition.] arrangement.

This case can be seen as an application of the objective approach to offer and acceptance: a reasonable person in Boulton’s shoes would have realized that the offer was addressed to Brocklehurst and not to himself, and it is clear that one cannot accept an offer if it is addressed to another. This is the basis on which the case was dismissed. Pollock CB said: ‘if you propose to make a contract with A, then B cannot substitute himself for A without your consent.’ 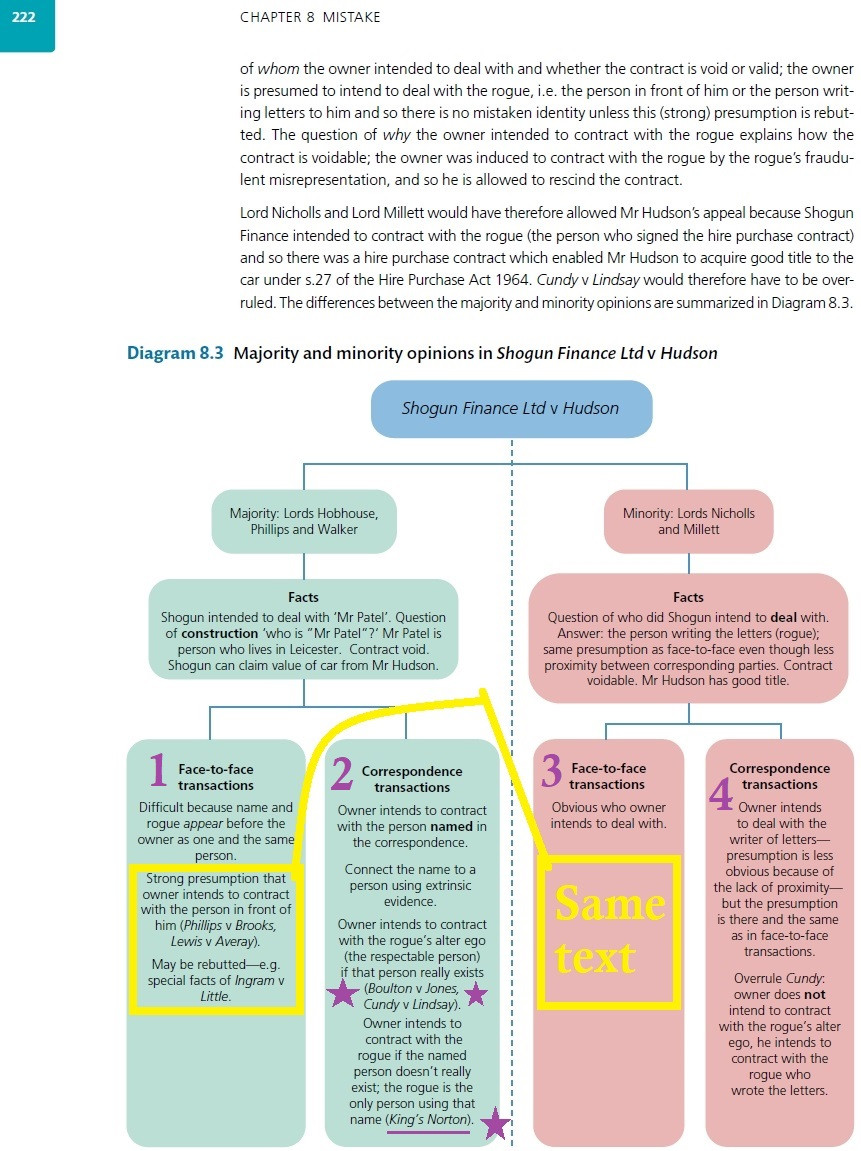 The information is inconclusive. There is no way to discern whether the underlying transaction in Boulton v Jones is "face-to-face" and "correspondence", not to mention that the author's flawed characterization of these labels only make this issue more confusing. Other than concluding that only Brocklehurst is ultimately liable to Boulton, the distinction between "face-to-face" and "correspondence" transaction is substantively inconsequential. Any difference would be exclusively procedural.

In Boulton, the only contract is the "set-off" arrangement between Jones and Brocklehurst. The allusion to set-off arrangement suggests that Jones ceded something (this being one side of the mutual deduction) and became entitled to the hosepipe (the other end of that mutual deduction) from the counterparty.

There is no indication that the arrangement was premised --be it since its formation or by means of an amendment-- on the permanence of Brocklehurst as business owner. Were that the case, Jones would be liable to Boulton because under the terms of the arrangement Jones knew or should have known that his entitlement would disappear in the event that Brocklehurst sells & transfers his business.

Nor are there any details of Brocklehurst's transfer to Boulton so as to discern whether this liability (i.e., the supply of a hosepipe to Jones) was part of the business transfer. That aspect would make the procedural difference between (1) Boulton having a claim against Brocklehurst, and (2) Boulton having a claim against Jones and in which Jones could be a third-party plaintiff.

Nor is there any suggestion whatsoever that Jones's cession(s) & requirement(s) in the set-off arrangement would have been any different had he knowingly dealt with a different entity. Thus, there is no support for the proposition that it was obvious who Jones intended to deal with.