A message from our CEO about the future of Stack Overflow and Stack Exchange. Read now.

Why did EWCA conclude that Gilchrist Vending v Sedley Hotel Ltd consisted with the principle that nominal consideration sufficed? 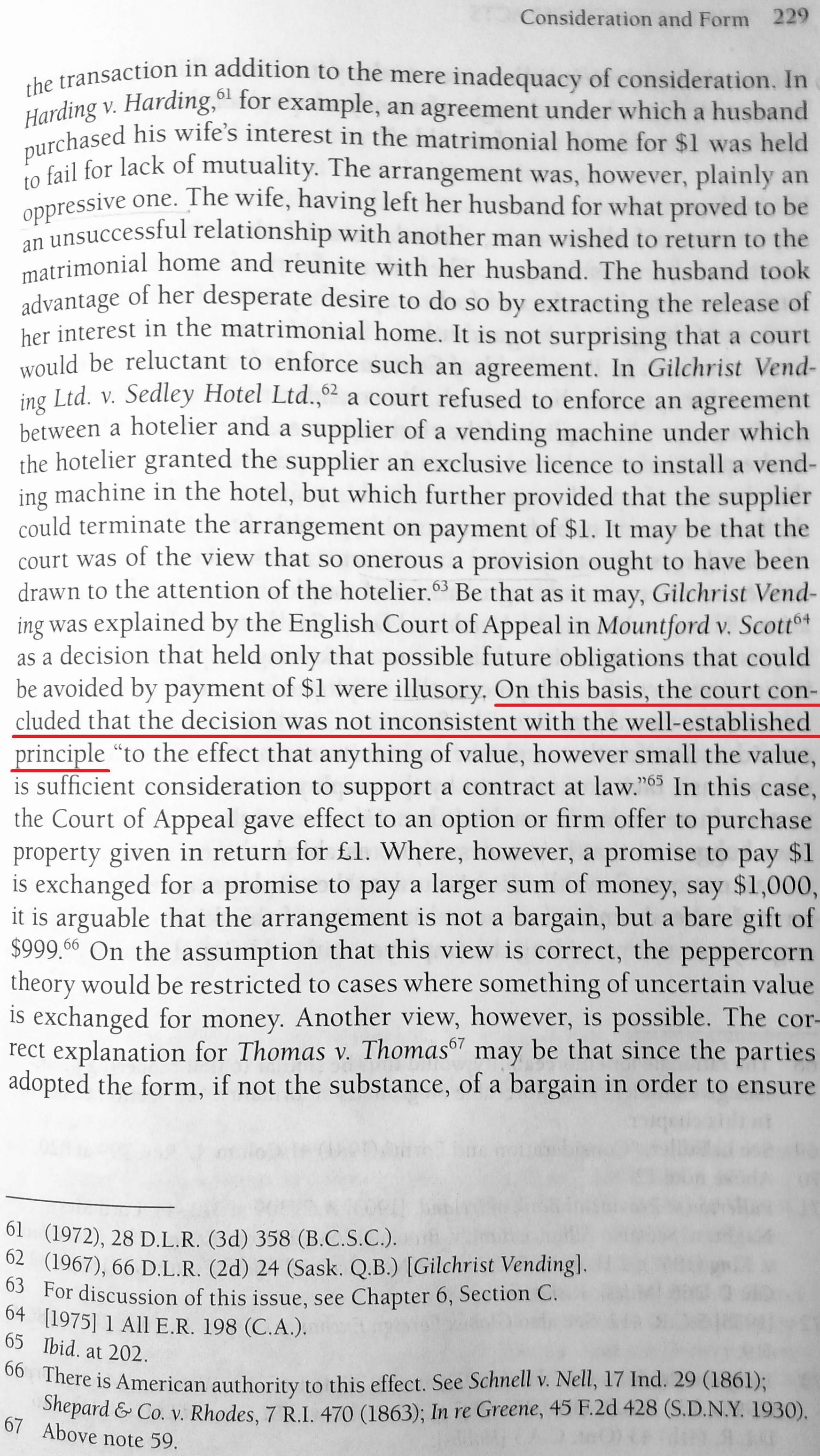 The third ground of attack on the validity of the option agreement was that the consideration for the grant of the option, stated and paid, namely £1, was a sum which the law would not regard as valuable consideration: therefore there was no consideration in the eye of the law to support the obligation on Mr Scott not to withdraw his offer for six months. This I found a startling proposition. The industry of Mr Narayan has not been able to find any support for it in English authority; and his reliance on a Canadian case of Gilchrist v. Sedley, which is reported in (1967) 66 Dominion Law Reports, Second Series, page 24, was based on a misreading, in my view, of the decision in that case, which appears to me to suggest only that possible future obligations which could be avoided by payment of £1 were illusory as consideration.

(f) CONSIDERATION NEED NOT BE ADEQUATE

Thus specific performance was ordered of an option to purchase a house for £10,000 even though the consideration for the grant of the option was the nominal sum of £1.53

53 Mountford v Scott [1975] Ch 258 (Brightman J). But note that, in contrast to Brightman J, the Court of Appeal in that case regarded the option as having been exercised so that the specific performance related to the contract of sale for £10,000 not the option contract for which the consideration was nominal.

This is clearly not adequate consideration for the painting but it is sufficient.

I can't find the actual judgment but this 1968 paper has the following commentary:

In the case of Gilchrist Vending Ltd. v. Sedley Hotel Ltd., the uncertainty affected the whole contract. Here there was a form of agreement by which the hotelier purported to grant a shuffleboard operator an exclusive license to install a shuffleboard on his hotel premises. The type of shuffleboard was not specified and the terms of the agreement relating to termination and an option for the hotelier to purchase the board were also imprecise. Mr. Justice Tucker had no hesitation in stating: "Unless parties have come to an agreement the terms of which are certain or ascertainable, no agreement can be in force between them. The Court cannot make an agreement for the parties." The judge also felt that there was no consideration given by the operator, as there was no obligation on him to install the shuffleboard, and the termination clause allowed him to terminate the contract upon payment of one dollar. It is unclear why the profit-sharing agreement, to take effect if the plaintiff installed the board, did not constitute sufficient consideration for the unilateral contract, and the dislike of courts for termination clauses, apparent in these two cases, seems sometimes to be supported by little legal rationale.

Here the contract fell over because there the agreement was too uncertain - it was completely unclear what Gilchrist Vending (GV) was actually obliged to do. Indeed, it was unclear if he had to do anything. As such, GV had provided no consideration for the exclusive license.

Not the answer you're looking for? Browse other questions tagged contract-law canada england-and-wales or ask your own question.

3
How did 'consideration' semantically shift to mean 'something given in payment'?
2
Why couldn't the Ministry of Defence fetter its public law powers by promising not to transfer a SAS soldier?
1
How's a “mere failure to perform future obligations” equivocal and equally consistent with not exercising the right to repudiate the contract?
0
Why can the right obtained by giving nominal consideration be less secure, if not negated?
1
If you paid $2.5 for a car that's worth $3 if of the age represented, why would you get (1) an award or (2) loss of bargain damages?
1
If D leases a house to C for C's promise to renovate it personally, why can't D get specific performance of C's obligation?
1
Why's it nonsense that a contractual variation is enforceable if the other side’s obligations are altered trivially, but not otherwise?
0
Why would binding someone abolish an exception to the rule that bargains bind?