How is judicial review about seeking to enforce government bodies' duties, but not rights allegedly infringed?

Elliott distinguishes between judicial review ("JR") to enforce duties on agencies, and judicial review to enforce rights. He says this is an important but subtle distinction. It is too subtle for me to fathom. Can someone please ELI15 (Explain Like I'm Fifteen)?

We think differently about the public law that is enforced via judicial review than we do about the private law that is enforced in claims brought in contract, tort, and so on. When claimants seek judicial review, they are not seeking to vindicate rights that have allegedly been infringed by, for example, a procedurally unfair government decision. Rather, they are seeking to enforce the duties—for example, the duty to act fairly—under which public law places government bodies.

This is a subtle, yet important, distinction. It reflects the fact that whereas the prevailing view is that a breach of contract is an essentially private matter, a breach of public law is something in which the public generally has a legitimate interest. On this view, even if a specific individual suffers particular harm as a result of an unlawful decision by a public body, the public as a whole has an interest in ensuring that government authorities respect the principles of good administration that the courts have developed. 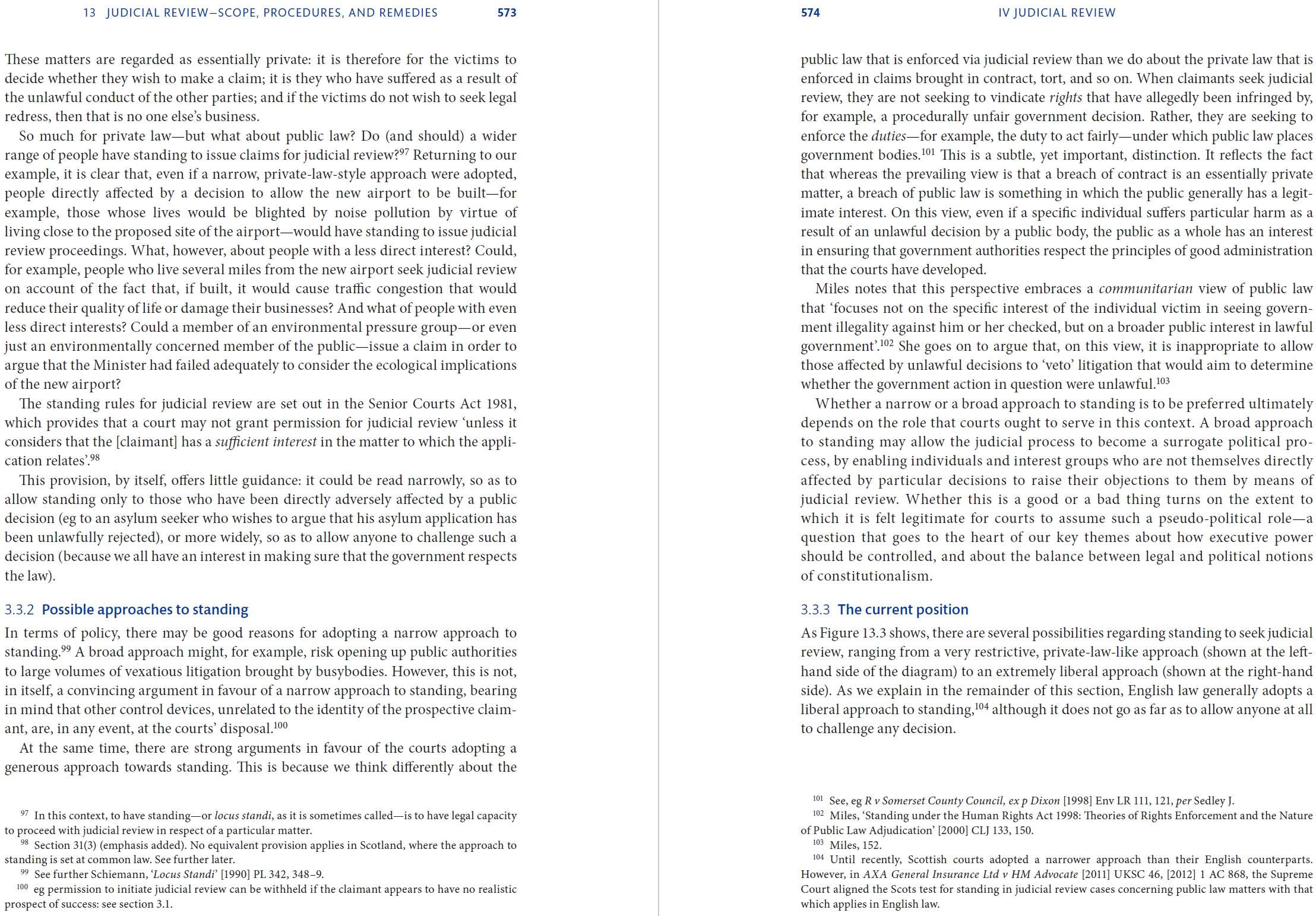 Judicial review refers to a court's ability to review a decision made under administrative law by the administrative branch of government or to rule that a statute passed by the legislature is invalid because it conflicts with a higher law - usually that the law is unconstitutional but it can also be because different statutes say incompatible things. This second type can arise from any case, not just ones founded in public law.

Private individuals (and even governments when acting in non-government capacities like employment or purchasing) are free to resolve disputes in any way they like. They can negotiate, use mediation or arbitration or even flip a coin. It's only their interests at stake so only those parties should have standing.

However, when judicial review kicks in, the court is considering a decision of government, which, even though it may be a particular decision about a singular set of facts with discrete parties, in theory, the way government makes decisions impacts everybody. Therefore standing should not be overly limited. This can be handled by allowing intervention even where the party lacks standing.

Not the answer you're looking for? Browse other questions tagged judicial-review or ask your own question.

3
When has Judicial Review not been the process used to deem an act unconstitutional?
1
USA Supreme Court and Congress response
1
How low is the bar for “legitimate government interest”?
6
Without judicial review, what is the point of the Dutch constitution?
0
Why is it just “lazy and non-falsifiable” thinking to believe judicial review is just politics or values in a different guise?