Do you have to obey English-only traffic signs in Toronto?

Canada is bilingual, yet some major metros like the Greater Toronto Area have all of their traffic signs in English only, without a French duplicate.

Is this legal or not? Do you have to respect such signs, e.g. no turn Mon-Fri, or are they effectively informational only? What if you don't even speak any French?

There is a forum that discusses the Ontario Highway Traffic Act, and this is apparently a question that gets asked a lot. To sum up the discussion, because of O.Reg 615 of the French Language Services Act, there is a possibility that you can challenge uniligual signs in French service regions like Toronto. The reality is, Toronto never adopted the option to make all traffic signs bilingual. Quoting someone who posted in the forum who tried to challenge a sign without french and lost the case:

"...the prosecutor argued that City of Toronto never approval or adopted this bilingual option. He further mentioned that the City has appealed and won the case from the superior court."

From the Highway Traffic Act:

HTA OREG 615
52. A municipality situated in an area designated by the French Language Services Act is not required to comply with the sign requirements for such areas unless it (Municipality) has passed a by-law under section 14 of that Act.

So the answer appears to be yes, you have to obey English-only signs in Toronto. You may be able to challenge signs in other areas of Ontario, but only if a municipality has passed a by-law under section 14 of the French Language Services Act.

Yes, you have to obey all posted signs. Depending on the region, you could make an argument that the sign must be updated to include french, but it is unlikely you could argue that you were not required to obey it in most places.

Canada is bilingual at the federal level, so all federal services must make their signs bilingual, but the provinces of Canada are not all bilingual. The laws will change from province to province, Quebec for example is technically unilingual French, so they are not required to put english on their signs, but regardless of which province you are in, you must obey all posted signs.

There are a number of provinces that are unilingual English, I grew up in British Columbia, there aren't any French or bilingual signs out here except for in National Parks and on government buildings. I couldn't carry a conversation in French if my life depended on it, not many people out here could, and the ones that can mostly moved here from Quebec. 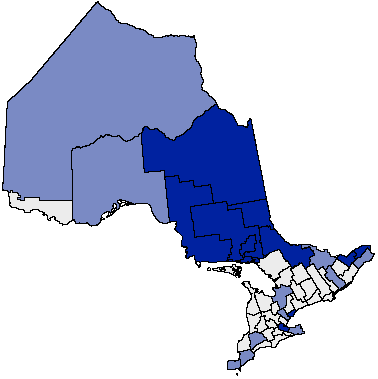 Toronto is a designated french services municipality, so technically, the sign probably should be bilingual, but the fact that it is not does not give you justification to break the law. Like I already said, you could file a complaint and have the city update the sign, but you're not likely to get away with a traffic violation based on the fact that the sign wasn't bilingual.

Yes, you pretty much have to. While one person convinced one Justice of the Peace that the English-only signs were invalid in 2004 (and then pled guilty on appeal), in 2011 an attempt to argue that the signs were invalid was rejected by lower courts, and the Ontario Court of Appeal refused to hear that case while commenting that they considered the 2004 decision to be incorrect (R. v. Petruzzo). While refusing to hear an appeal doesn't create binding precedent that the English-only signs are OK, it means that you're unlikely to succeed in your argument that they aren't allowed.

Not the answer you're looking for? Browse other questions tagged canada traffic or ask your own question.

11
Do you need to obey an obstructed traffic sign?
4
Driving through a red after traffic lights have been broken
3
Do speed-limit signs on portable speed displays have legal force?
4
Are traffic signs on private property legally enforceable in Upstate NY?
0
traffic stop, do you have to give id if no crime was commited?
2
Is a police car parked perpendicular to the road (with flashing lights) sufficient by itself to legally establish road closure to all traffic?
0
Do you have to answer questions in English when pulled over?
0
Do stop signs qualify as traffic control signals?