Would conditioning wildlife to harrass someone playing music too loud risk legal repercussions? 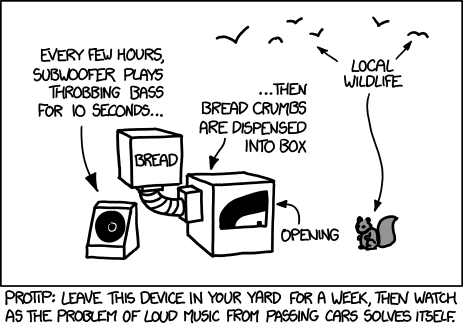 I'm pretty sure no one is actually considering a solution like this, but it made me curious what would happen if someone tried it. I'd consider training wildlife to harass individuals to be generally antisocial, even if they were playing annoying music, and conditioning to harass someone who is driving when it could potentially lead to an accident would be doubly so. Thus it would presumably be something the government, and thus legal system, would want to discourage. The question is rather the legal system has any rules about this particular situation.

Thus I'm wondering if someone tried this and it lead to a driver being harassed by animals could there be any legal repercussions, and if so what would they be? I'd count both civil or criminal actions here. If jurisdiction matters the creator of the comic is located in Massachusetts, USA.

For now lets ignore any potential disturbing the peace issues that may come up with playing music when food is dispensed.

The means and motivation by which you intentionally harass people are no defense.

Not the answer you're looking for? Browse other questions tagged criminal-law civil-law or ask your own question.