How can you legally openly carry rifles to the Michigan governor's office?

I'm British, and was befuddled to see this picture on /r/Cringetopia of lockdown protestors carrying guns right up to the Michigan's Governor office door. How's this legal?

There are just so many dangers to this open carry. Did the security at Gov Gretchen Whitmer's office tail these protestors? What if Gov. Whitmer doesn't have enough bodyguards, or if they don't have enough firepower fight off these protesters, if they start shooting with their rifles? 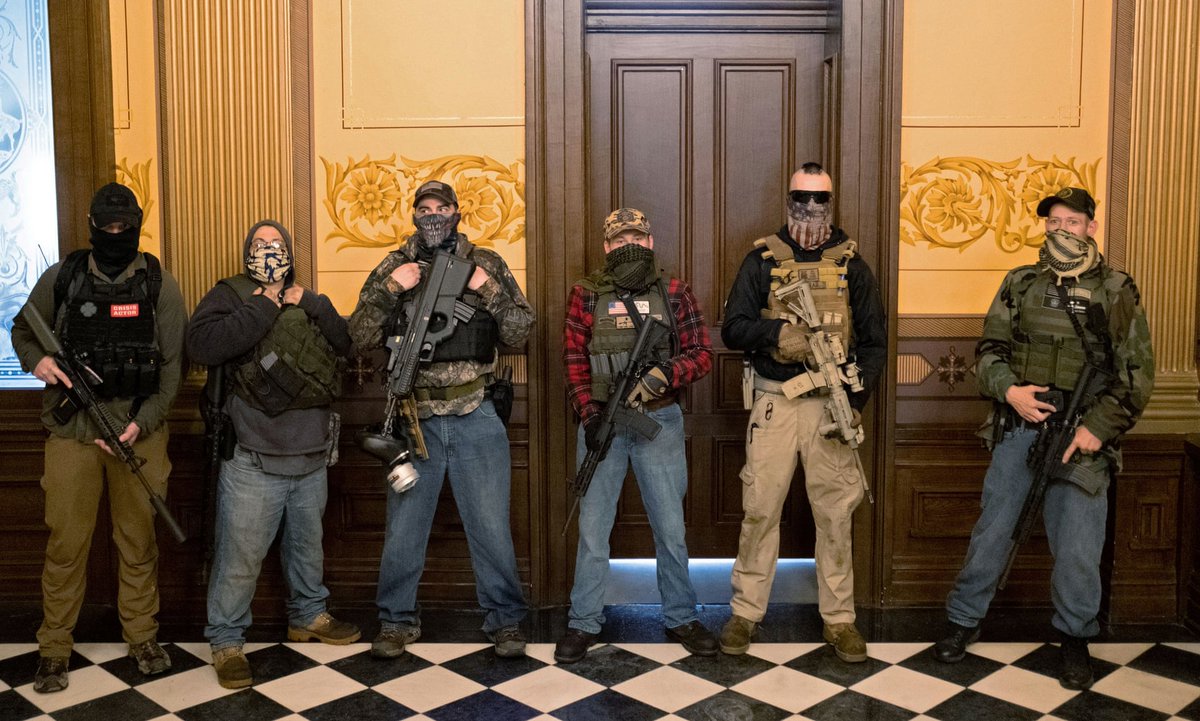 Honest question: are they allowed to carry guns in the statehouse, legally? Most states have metal detectors and laws against it (not from Michigan just following the news).

Same for “demanding” to see the governor and the house floor.

And if it is illegal (and they are straight up terrorists) why aren’t they arrested? They can call it civil disobedience but that still makes them terrorists.

Yes, they are. I think a few years ago they had a bill to stop it. Instead they voted to allow guns, but prohibit protest/political signs. My guess is the black marker and poster board lobbies couldn’t outspend the gun lobbies. So now we have AR-15s waving at our legislators as they vote.

Protestors are somehow allowed to carry guns right up to the Michigan's Governor office door. : pics

The basic reason that they are allowed to carry weapons is the First and Second Amendments, meaning that you can express yourself, and you can carry weapons. There are various minimal limitations on the right to free speech, so that you can't threaten a person's life; there are more limits on the right to bear arms. In both cases, laws limiting the exercise of those fundamental rights must be restrained, and a law against openly carrying guns to a political protest would be subject to "strict scrutiny", meaning that there would have to be a compelling reason to infringe on these rights. The legal rule, here and in the UK, is that it's legal unless it is specifically illegal. That is not to say that Michigan could not pass a law outlawing the carrying of weapons in government buildings, or outlaw political protests right at the door of the governor's office, but until they do, it's legal. As to why certain states have enacted laws outlawing open carry and potentially-disruptive protests, that's mostly a political question rather than a legal one.

Not the answer you're looking for? Browse other questions tagged michigan or ask your own question.

0
Under what circumstances do you have to report the income of your LLC for the state of Michigan and how often?
0
My job seems to be ignoring a state executive order to suspend activity. How can I best protect myself but also report them to the authorities?
2
Is a gun in the waistband with a tucked-in shirt concealed or open carry in Michigan?