Can a bank keep cleared funds against your explicit instructions?

Does any legislation exist which permits or requires a bank to hold on to cleared funds against the explicit wishes of the account holder?

I recently transferred my home loan to a new bank. When the new bank paid down the balance on the old loan, they actually sent about $2200 more than the balance outstanding, leaving the account in credit.

Shortly after this occurred, I requested that the old bank withdraw the surplus amount for me, so that it could be deposited back with the new bank. They refused on the grounds that the loan account was being closed and I had to wait for that to occur.

Some weeks passed, and I received a letter from the old bank, which in essence said "we're keeping your loan account open indefinitely unless you advise us otherwise in writing, if you have a credit balance on your loan you may redraw it". So I went back to the branch, and again asked for the credit balance to be withdrawn.

Again they refused, and we spent some time arguing the point. Their branch manager insisted that there's legislation in place which requires them to keep the credit balance. I asked to see the relevant legislation, but of course the manager didn't comply.

I left them with the following written instructions after it became clear that they had absolutely no intention of actually helping me: 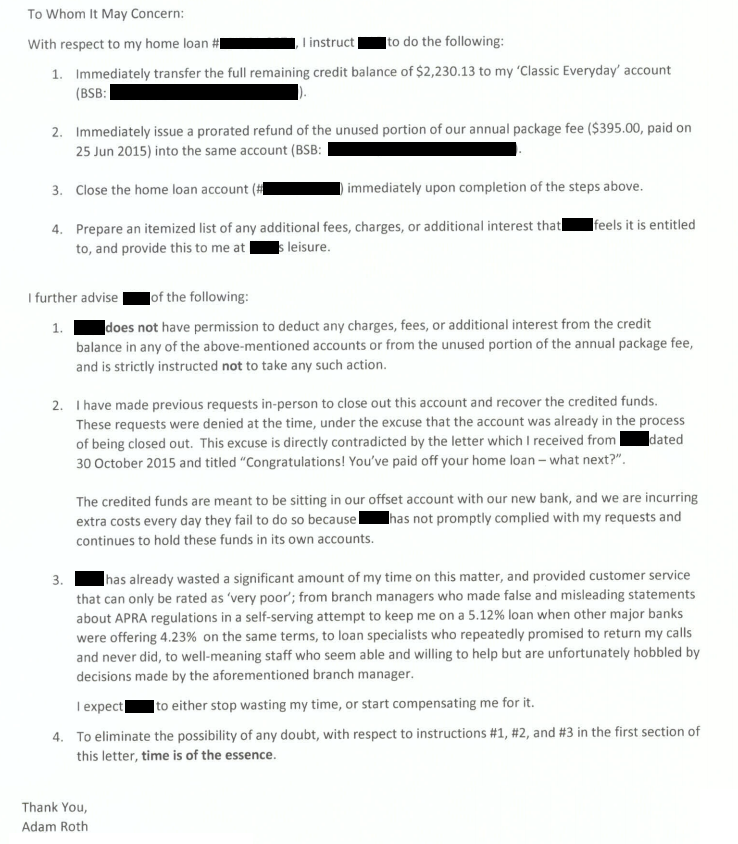 As far as I can tell, they've acted on exactly none of those.

So my question is, does any legislation exist that would give the bank grounds to hold my funds against my explicit wishes, or is what the bank's doing essentially theft?

It took them a few days (5 business days, to be exact), but they eventually followed all of the instructions I provided (excluding #4, as they did not charge any fees).

Though based upon jimsug's answer, that may be less because of any legal obligation and more because they finally decided to do better at customer service. My letter found its way to their complaints department, which took care of things.

Regarding to your instructions concerning the funds in the account, it's hard to prove a negative. As far as I know there is no legislation that requires a credit balance to be retained. However, there may be some regulations or internal policies regarding the closure of home loans, which may preclude closure without some documentation or other process.

But just because you can't cite legislation that requires you to do things, doesn't mean it doesn't exist. You don't ask the new bank to support their claims which contradict the old banks, because it works in your favour.

With regard to the last instruction regarding your funds, the bank can and will provide you with a list of fees and charges applied to your account - it's called a statement.

With regard to your explicit other option - is what the bank's doing essentially theft? - you can call it theft, but it's not. At worst it's conversion, the remedy for which is the recovery of the converted property, or damages equal to the value of the property.

If you have attempted to resolve your complaint through the bank's internal dispute resolution processes (usually some kind of complaint process), you can also contact the Financial Services Ombudsman, who may assist with these situations.

Finally, as for your further instructions, they are all void and unenforceable.

1. You cannot impose terms on the conduct of another party without their agreement. This is called a counteroffer or variance to their established terms which you will have agreed to at the time that you established the original loan.

3. You can never be compensated just for your time.

Not the answer you're looking for? Browse other questions tagged australia finance or ask your own question.

3
Do I have any options if Chase has closed my account citing payment from fraudulent sources?
0
Can I claim against an entity who is in breach of a GPL license against a third party?
1
Can a retail marijuana shop bank from a locally owned bank outside of their state?
1
How is getting foreign investors to support your bank fraud? (Barclays)
2
Can a bank foreclose on a home of a person who has been kidnapped?
3
Would there be any legal risk to informing bank that you have been given an account number your believe is compromised?
6
Can tech companies wishing to prevent secret backdoors discriminate in hiring against Australians?
3
Can a couple be charged for spending $120,000 deposited to their bank account in error?