Can I use chess diagrams in my book without infringing any copyrights/having to pay any royalties?

I am thinking about writing a book that has chess diagrams in it. For the fonts I am using the "Chess Merida" font, which is the "default" chess font used in almost all chess books. I want to make sure I'm not infringing on any copyright by doing so, and I have no experience in copyright laws so I'm asking here.

Basically there will be multiple chess diagrams in the book, an example is given below. 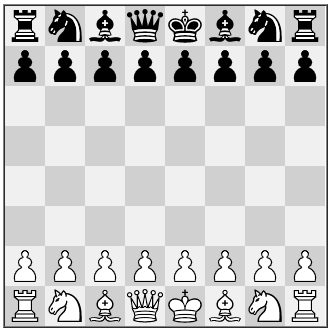 There is really no simpler way of drawing a chess diagram.

On the other hand, I have seen several websites using this format, but then prohibiting commercial use of the diagrams. For instance, this chess diagram editor allows one to edit the exact same kind of diagrams as my example, yet the website says

"... is free for non-commercial amateur use only."

So that made me wonder about copyright laws relating to chess diagrams. Obviously, I don't want to get into trouble by publishing copyrighted diagram types. Moreover, I'm not sure whether there are any royalties to pay to someone (who?) for the use of the Merida chess font.

So can I use such diagrams in my book without getting into trouble?

EDIT: if it is not free for commercial use, does this mean that all chess book authors pay royalties to chess font editors?

As noted by Tardigrade, the Merida chess font is available from https://github.com/vasiliyaltunin/chess-merida-font. However this is a derived work which incorporates a much older file containing the actual glyphs in TTF format.

Edit: If you google for "Armando Hernandez Marroquin" you will find a lot of font download sites offering several chess fonts by Marroquin. I've sampled a couple of the README files from these fonts, both of which contained the same freeware statement quoted below.

The source/README_D.TXT file referenced from the front page seems to be by the original lead author Marroquin speaking on behalf of the other authors, and says:

The font is freeware, I hope it is useful for the chess buddies. If you want to repay us, you can send us some other fonts for creating chess diagrams (we are collecting them).

As far as I can see the TTF font file by Marroquin et al has been incorporated directly into this repository, so if you were to use that alone then the original "freeware" grant would apply. The Mozilla Public License only restricts the other works in the repository (contrary to what the repository README claims). TTF is a compiled form of the font, so that would explain the use of the term "freeware": this is not open source.

It is true that "freeware" is not a formal license. The usual definition is "software made available free of charge". The following note about "If you want to repay us" would also seem to indicate an intent to make it available to all without requiring a fee.

The figures of this font follow the more traditional style of the figures found in many publications with chess diagrams. I took them from a book with more than 5,000 chess problems.

This means that Marroquin et al probably cannot claim any IPR in the visual appearance of the font glyphs. It is possible that some expressive content might be found in the exact proportions of the various glyphs, but to the extent that they merely copied traditional figures into a computer there was no creativity and hence no copyright.

However Marroquin et al could claim copyright in the resulting TTF file, and any other format derived from it which describes the font in terms of vector shapes. The appearance of a piece does not dictate any single representation in geometric form in a font glyph, so the decisions made by Marroquin et al were creative. The only exception would be if the diagrams were represented using bitmaps, as that would merely be a representation of the appearance and not include Marroquin's creative work.

This matters because it affects electronic and paper publication differently:

Whether a publisher's legal department would consider this sufficient is another matter.

The Apronos.com website you reference says that it is free for non-commercial amateur use only. However this is a restriction on the use of the website itself; if you use it to create diagrams which you subsequently publish then the website owner has no rights to your work, only to compensation for violating his terms of service (such as they are), and to an injunction stopping you from doing it again.

If the website offered a commercial paid service then they could claim the damage as being the amount you avoided paying. Without such an alternative they could only claim the amount that you cost them by using the service, which is going to be trivial.

If you want to be absolutely safe you can always email the website owner and ask if you can have permission in return for a contribution to running costs.

Unfortunately I consider this an incomplete answer for now; hoping I can find more later (and apologies for formatting; will fix later).

This page: https://github.com/vasiliyaltunin/chess-merida-font/blob/master/README.md states that the "Chess Merida Font" available there is made available under MPL 2.0. It then however explicitly states that it's derived from the Chess Merida font designed by Armando Hernandez Marroquin, and doesn't state the license that original is under (which could prevent derivative work), meaning the legal status of this derivative is unclear.

I found various references to the original font being "freeware" but that is not a legally defined term, and was not attributed to a reliable source anywhere I could see. And I have not so far been able to locate a statement by the original author (or found an online presence for them).

Not the answer you're looking for? Browse other questions tagged copyright publishing or ask your own question.

2
How might this use of the Star Wars logo and universe be legal?
3
What can I do to use classical music in an advertisement?
3
Can the author of software claim copyright on the data it generates?
0
How can I ensure ownership of a custom font someone makes for me?
0
Copyright and derivative works
0
Including geometry dervied from copyrighted fonts in open source software
1
Am I allowed to reproduce work published on a website for free which bears an “all rights reserved” tag?
1
Can I use whole poems from classic writers in my book?