Is this grounds for Child Protection Services

If a religious parent found out their child was an atheist or part of the LGBT community, then freaked out about it and told them I rather have you dead than have you be what you are. Can CPS remove the child out of the home?

To combat LGBT and Atheism by wishing death; is that child abuse?

The test for child abuse is a broadly worded "standard" that is applied in the discretion of the judge or jury, as the case may be, on a case by case basis. But, it is very unlikely that this would considered to meet the test for abuse.

Federal legislation provides guidance to States by identifying a minimum set of acts or behaviors that define child abuse and neglect. The Federal Child Abuse Prevention and Treatment Act (CAPTA) (42 U.S.C.A. § 5106g), as amended by the CAPTA Reauthorization Act of 2010, defines child abuse and neglect as, at minimum:

"Any recent act or failure to act on the part of a parent or caretaker which results in death, serious physical or emotional harm, sexual abuse or exploitation"; or

"An act or failure to act which presents an imminent risk of serious harm."

While the risk of serious emotional harm in this case is real (in the view of many reasonable people), in practice, authorities would surely consider it to be hyperbole and not within the scope of child abuse, even if actually heartfelt.

Further, due to the existence of the free exercise clause of the First Amendment to the U.S. Constitution, conduct which might otherwise be considered abuse, is generally only treated as such in the most extreme situations of dire threats of physical harm, when credibly justified by a parent's religious beliefs. This is because the ability to raise one's children in accordance with one's religious faith is an implied component of the constitutional free exercise of religion right. A basic review of the case law as of 1989 (which hasn't changed all that much since then) can be found in this 1989 law review note (an uncredited law review article written by a third-year law student who is an editor of the law review) entitled "When Rights Clash: The Conflict between a Parent's Right to Free Exercise of Religion versus His Child's Right to Life" 19 Cumb. L. Rev. 585 (1988-1989).

Sometimes this exception is implied in interpretation, but many states have express statutory exclusions for religiously motivated conduct that would otherwise constitute child abuse or neglect related to medical care (that would color how a case like this one is interpreted). 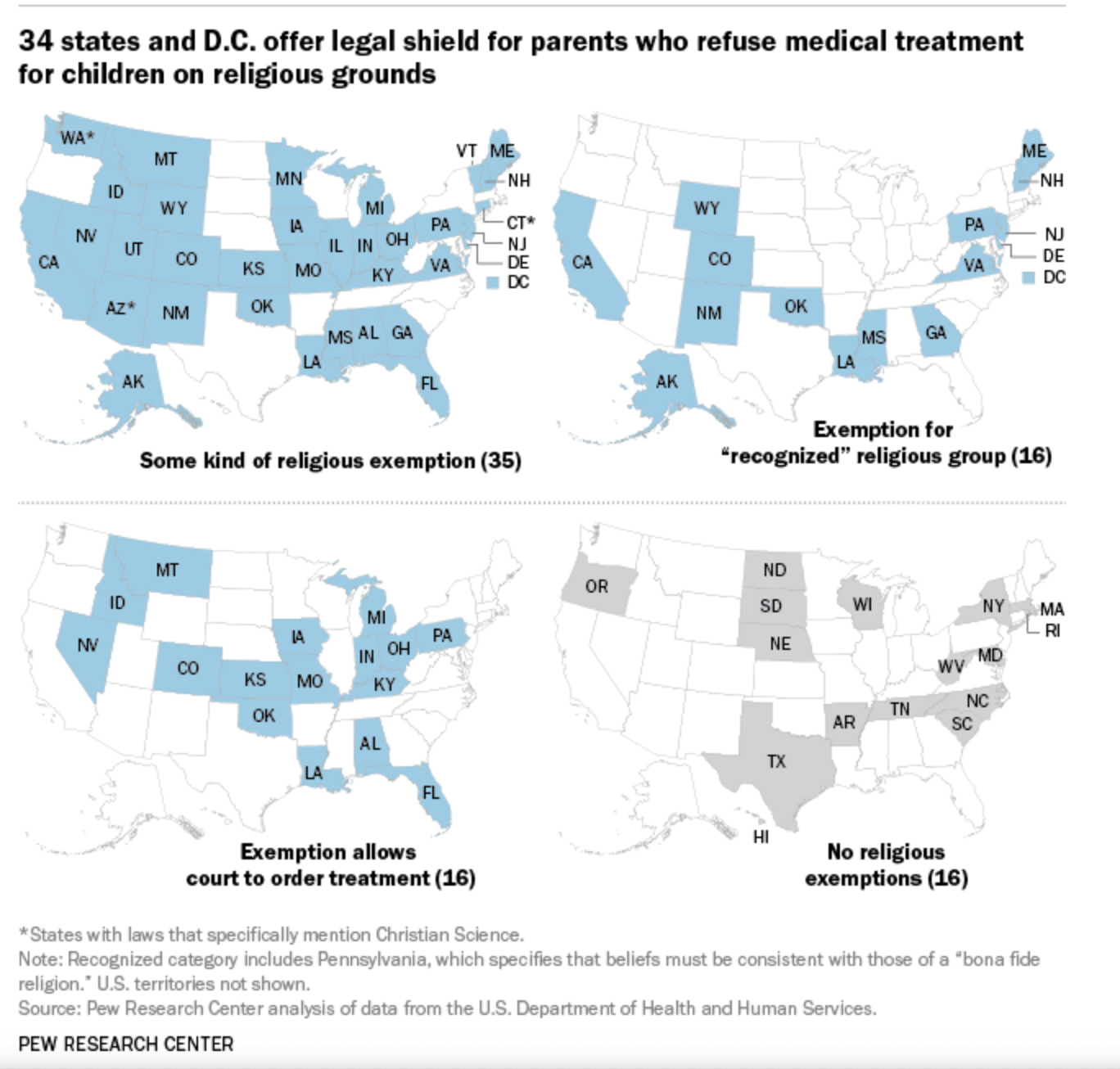 Not the answer you're looking for? Browse other questions tagged united-states criminal-law child-abuse parental-rights freedom-of-religion or ask your own question.

3
My friend got stabbed by her brother and can't return home
1
How can sexual assault on a minor not result in jail time in the UK?
1
What are the penalties for filing a false report to Child Protective Services?
0
Family trust but probate (informal or formal?) needed
8
What crime has someone committed if they “kill” someone who is already dead?
33
Do I have the right to enter into someone house without permission if my child is in there?
5
How legally enforceable are documents giving up paternity?