Can a lawyer take a ridiculous case?

The situation: A wants to sue B for some money. The reason why B should pay the money is totally ridiculous. Any judge seeing it would just laugh and send A home. But A goes to a lawyer, who tells A that taking this to court has zero chance winning, and A will only be throwing their money away.

PS. What caused me to ask was a story on another website: A company hires a public speaker. The contract says that if the company cancels with less than two days notice, they have to pay (quite reasonable). The public speaker cancels with less than two days notice and somehow imagines that he is owed money. No other motive, he wants his money and thinks he deserves it.

In the UK, sanctions on the lawyer will vary based on what they did.

My answer does NOT address frivolous litigation by the client — it ONLY addresses the question "Can the lawyer get into any trouble for taking the case and bringing it to court?"

If the lawyer has a history of taking on frivolous cases, the relevant regulatory body may get involved as the lawyer has the professional obligation to maintain the reputation of the legal profession—and taking on cases that have no merit undermines that.

Taking on clearly frivolous cases may undermine that reputation, but it would be fact-specific and likely require the lawyer to act on a large number of clearly useless cases. Additionally, the lawyer has other professional obligations: such as advising the client not to pursue such cases and refusing to represent them where doing so is not in the client's best interests—again, the relevant regulatory body would be concerned with any breaches of that obligation.

It is possible for a solicitor to be struck off and a barrister to be debarred. Any sanction will be fact-specific. I have outlined the relevant regulatory guidelines all lawyers need to follow below. A frivolous case may breach all three principles for each type of lawyer respectively, but the regulatory body will decide whether the lawyer gets off with a fine, a warning, and so on.

Solicitors are required to follow the Principles set down by the Solictors Regulation Authority. In particular, Principles 1, 2, and 7 apply here:

Barristers are also required to follow the Bar Standards Board Handbook, known as the Core Duties: namely, Core Duties 1, 2, and 5:

These are regulatory standards and failure to uphold them can lead to being removed from the solicitors' roll and debarred by the Bar Standards Board respectively.

In the US, there are many possible sanctions

A frivolous case, or pattern of cases, can result in a number of punishments:

For instance, California is one of only four states allowing cash awards for ADA violations. A clever person named Mr. Molski went around to different restaurants and checked their bathrooms for ADA compliance. If a toilet paper roll was 1/2" out of position from where ADA required, Molski would take notes. Molski checked dozens of restaurants every day, and passed these notes onto a San Francisco law office.

The law office filed hundreds if not thousands of these lawsuits against the various restaurants. The lawsuits all claimed that Molski was injured as a result of the ADA noncompliance.

Mind you, this was in the age before easy merging of databases and MS-Word documents. Since these hundreds of cases were so similar, they simply made Xerox copies of the relevant paperwork, only leaving a few fields blank to be typed in by hand. To reduce secretarial workload, they didn't bother customizing the date of injury: so all cases claimed Molski was injured on the same day.

Hundreds of defendants simply settled for amounts in the $5000 range (about half the cost of hiring a lawyer to grind through a trial). However, one defendant, a Chinese restaurant, fought. Their counsel discovered the hundreds of other same cases, and pointed out to the court that Molski was claiming to have suffered the same injury at dozens of restaurants on the same day. What an unlucky fellow!

The defendant then claimed Molski and attorneys were Vexatious Litigants, and the court wholeheartedly agreed.

Then we have Righthaven, who purchased from newspapers the "right to sue and collect damages" for copyright violations. Many bulletin boards, chatrooms, forums and Q&A sites allow/rely on "User Generated Content" (UGC), such as this here answer. They used search engines to find forums where users had copy-pasted newspaper articles. Generally, forums are protected from user behavior by the DMCA. Then, like Molski, they sued the forums, offering a settlement number below the cost of litigation itself. Again, hundreds paid; but a few fought on principle, with support from EFF. Again, Righthaven got destroyed in court - the right to sue cannot be sold. Courts ordered them to pay their victims' legal fees, bankrupting the operation.

I was in a case where we asked for fees. I got them, with such ease that I am kicking myself for not asking that the plaintiff be declared a vexatious litigant (which would have saved many others from this person). Further, the judge laid a heavy hint to the 3 other co-parties that if they asked for fees, they'd get them too. They did not ask.

Yes, the lawyer can sue but in the USA, the client might have to pay the other party's legal fees.

One type of “ridiculous case” is the so-called SLAPP lawsuit. SLAPP stands for Strategic Lawsuit Against Public Participation. The Reporters Committee for Freedom of the Press calls SLAPPS “an all-too-common tool for intimidating and silencing criticism through expensive, baseless legal proceedings.”

Mark Z. Jacobson, a professor at Stanford, published a paper in 2015 on renewable energy. In 2015, another scientist, Cristopher Clack, published a peer-reviewed critique of the paper. Instead of keeping the academic debate to the pages of scientific journals, Jacobson filed suit against Clack for defamation in a D.C. court in September, 2017. In February, 2018, Jacobson voluntarily withdrew the suit, filed but Clack pressed for legal fees. On April 20, 2020, a superior court judge awarded the legal fees under D.C.’s anti-SLAPP law, saying upholding reasonable fees are a “critical part of the statute.”

Quoting the above committee:

Anti-SLAPP laws are meant to provide a remedy to SLAPP suits. Anti-SLAPP laws are intended to prevent people from using courts, and potential threats of a lawsuit, to intimidate people who are exercising their First Amendment rights. In terms of reporting, news organizations and individual journalists can use anti-SLAPP statutes to protect themselves from the financial threat of a groundless defamation case brought by a subject of an enterprise or investigative story. Under most anti-SLAPP statutes, the person sued makes a motion to strike the case because it involves speech on a matter of public concern. The plaintiff then has the burden of showing a probability that they will prevail in the suit — meaning they must show that they have evidence that could result in a favorable verdict. If the plaintiff cannot meet this burden and the suit is dismissed through anti-SLAPP proceedings, many statutes allow defendants to collect attorney’s fees from the plaintiff.

There are anti-SLAPP laws in the majority of U.S. states. 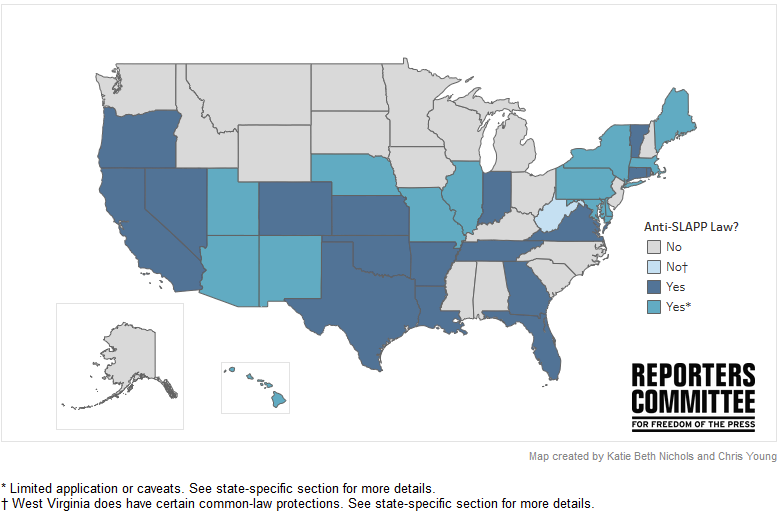 Lawyers, both as professionals in a BAR, and as officers of the court, are typically barred by court rules and professional ethics rules from bringing meritless lawsuits. While this applies to anyone, both clients of attorneys and pro-se litigants, lawyers are held to a higher standard.

anyone, including lawyers, who begins a civil action or asserts a defense in a civil action without probable cause is liable to the prevailing party for double damages or for triple damages if the action was brought with malice to vex and trouble. The prevailing party may also file a grievance against the attorney for violating Rule 3.1 of the Rules of Professional Conduct. This rule prohibits lawyers from bringing or defending a baseless action or asserting or a frivolous issue.

Any trial court in the state may order a party, the party's attorney, or both to pay any reasonable expenses, including attorney's fees, incurred as a result of bad-faith actions or tactics that are frivolous or solely intended to cause unnecessary delay. “Frivolous” is defined as totally and completely without merit or for the sole purpose of harassing an opposing party (Cal. Code of Civil Pro. § 128.5).

After hearing a contract or tort action, a court may determine that the action or any defense is frivolous or intended to harass or intimidate the prevailing party. After making this determination, the court may enter summary judgment against the party who brought the action or raised the defense and award the prevailing party reasonable costs and attorney's fees plus $1,000. The court must also report the conduct to the state Supreme Court committee on professional conduct (NH Rev. Stat. Ann. § 507:15).

That said, lawsuits filed out of stupid interpretations of a contract, still in good faith, are often dismissed for lack of merit but do not rise to the level of frivolous. Any competent lawyer can phrase and shape the suit in order to craft merit. A client lying to their lawyer, would not be held against the lawyer unless simple due diligence would have found out the lie.

Your example of a party suing for payment under a cancellation clause may not be outright frivolous, depending on the text of the contract, who drafted it, the circumstances. A contract formed by two companies with drafting lawyers, even if unfair to one party, could be held valid since they had plenty of time and warning to disagree to the clause where the public speaker is the one to cancel and is still required to be paid, through no fault of the company.

An example, suing someone because they are a demon and caused you to lose your job through magic, would under just that statement be patently frivolous and likely not make it past filing. But suing someone for defrauding you by tricking you that they are a demon, causing you to lose your house through plain fraud, would be actionable and likely have merit, enough for trial.

Not the answer you're looking for? Browse other questions tagged united-states united-kingdom or ask your own question.

7
Is a lawyer allowed to stop representing his client?
1
My employer has declined my annual leave request a week before my holiday - is this legal?
1
Can my landlord (who recently bought the property) change the terms of breaking a month to month lease?
1
Cell phone with zero usage sent to collections agency
0
Can I lien a public building in the U.S. or how to collect on a judgment against a public entity?
1
Given notice of redundancy before 2 years employment, end date is after 2 years of employment - entitled to statutory redundancy pay?
0
UK - Do I accrue holiday when on paid leave?
1
How to find what arguments were used in a case?