For most websites, Twitter cards are not shown expanded on the feed. Indeed a link on the bottom right of my tweet that reads 'View details' (or 'view photo', or others depending on the card type). For big Websites like SoundCloud, Reverbnation Vine etc. is totally different, as you can see down below in the picture.

Isn't it an antitrust violation to facilitate in this way only some websites at the expense of others? 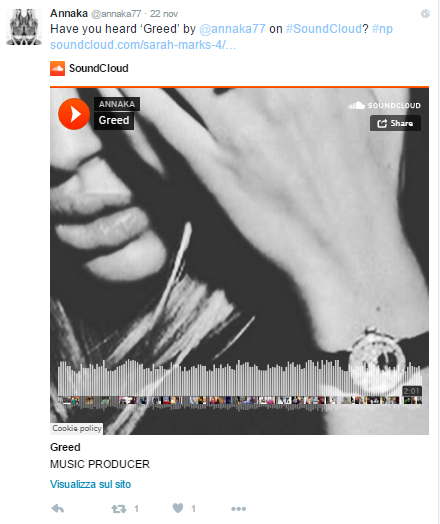 This facilitate enormously big companies at the expense of others, everyone wants to share with SoundCloud not with anything else it seems pretty obvious.

Do you think there are requirements to proceed with a class-action?

tl;dr: It seems doubtful an antitrust claim would succeed.

Twitter would likely file a motion to dismiss under Fed. Rules. of Civ. Pro 12(b)(6) for failure to state a claim upon which relief can be granted. To your benefit, the judge would tend to construe all of your factual allegations as true (i.e. that Twitter excludes some websites but not others). Then, given this construction it would ask whether your claim is "plausible on its face," where plausibility means "pleaded factual content allows the court to draw the reasonable inference that the defendant is liable for the misconduct alleged." Bell Atlantic v. Twombly, 550 U.S. 544 (2007).

Your legal sufficiency would need to come from an alleged violation, so say you alleged an antitrust violation under Section 1 of the Sherman Act (15 U.S.C. §§ 1-7, amended at 12-27). In this case, you'd want to show 1) an agreement 2) that unreasonably restrains competition and 3) impacts interstate commerce.

If there isn't an agreement (e.g. Twitter just chooses to plug SoundCloud), that makes antitrust success even less likely, so imagine you were able to show evidence of an agreement. Then the trouble would be showing this is an unreasonable restraint of competition. Antitrust is a really complicated field, but the short version is: partnership and product placement agreements aren't necessarily violations of antitrust law---especially when the companies aren't in the same market. While there certainly differences, your question is similar (from a legal concepts perspective) to the one LetsListen informally made with respect to Facebook.

Aside: another issue is that a Twitter--SoundCloud collaboration isn't a within-market merger, which means the usual antitrust analysis in the Horizontal Merger Guidelines doesn't translate perfectly.

This is likely not a law question: the developer has probably not had their player card WHITELISTED by twitter. Twitter has a mechanism to protect their users, by which embedded players have to pass a validation (to make sure it isn't malicious, etc.)

Not the answer you're looking for? Browse other questions tagged united-states class-action antitrust-law or ask your own question.

2
Software Packaging laws
5
Can Apple be found in violation of antitrust laws for Apple Music?
3
Am I experiencing an anti-trust violation?
2
Is it legal for NVIDIA to deny the use of the NVIDIA Capture API on non professional devices?
1
Arrest for civil violation in the US?
1
Can a city enforce antitrust laws in the US?