I am creating a game that has a great deal of items in the game. For these items I wanted to add some "educational" pop-up text when players hover over a certain item in the game. My idea was to simply take text from websites like Wikipedia (I understand the "reliability' issue already) and put them in as extra "flavor text" in my game like in the picture below (The text is in the while box at the bottom of the tool tip): 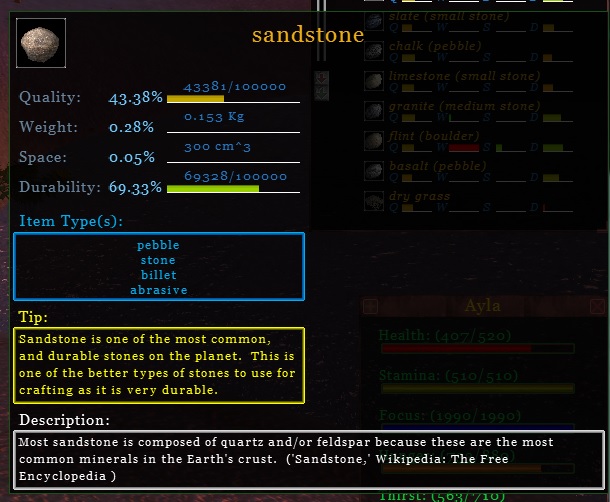 Most of the content in Wikipedia that I want to do this with is under the "Creative Commons Attribution-ShareAlike License" (CC-BY-SA) and this is where I get very confused.

So from what I read, it may be inferred that my entire game, images, artwork, source code, and everything else, is now under CC-BY-SA license, and I must make my entire game publicly available for free because I have added this one line of text.

So my question is: Is this true? Should I just do my own independent research on the each subject and put all of the descriptions in my own words?

Also I plan to sell this game commercially, so I do not wish to make my game freely available obviously. Also I plan to have hundreds, even thousands of objects in the game, and doing research for each one is a great deal more time to come up with a paragraph or two for each object. I am just trying to see if I can avoid that, as my time doing actual game development is much more beneficial.

I have no problem giving the citation credits for each passage as in the image. But is this CC-BY-SA licence going to make it so I cannot give anyone credit at all, and I just do my own research?

Here's one way to avoid the issue altogether: Wikipedia, or anyone for that matter, can't copyright information (only its expression). You can reword (automate the process?) the content (ie, w/out doing "independent research") and it's yours! Of course, I'm not a lawyer so consult one of those.

Yes, the license means what it says. CC BY-SA is a copyleft license. The point of these licenses is that anyone is free to do whatever they wish with the content, except put restrictions on its use.

To address the other answer: be careful when transforming copyrighted content to evade copyright laws. Yes, information (or more generally, ideas) can't be copyrighted, but if you fail to change the content significantly enough, it could be deemed a derivative work and thus subject to restrictions.

2
Is something including an unmodified work considered a derivative work?
2
Attribution in Stack Overflow
0
How much do I have to change a logo from an Video game IP (pokemon go) to create items and sell them?
0
Using informations from wikipedia in a paid quiz game
0
What is the resulting status of a sculpture using CC BY-SA works?
1
How can Wikipedia Creative Commons images be attributed in video?
3
Question about using Wikipedia content. About “CC-BY-SA” license. About its “Copyleft/Share Alike” part