Is there a legal reason why fictional shows use imitation brand names? 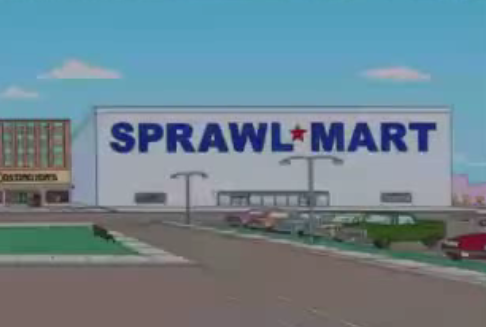 Often, when I watch TV shows, I'll see or hear about an imitation of a real brand name.

As an example, here is a parody of Walmart from The Simpsons The store in the picture is unambiguously supposed to represent Walmart. They're even using Walmart's Styling

Is there any legal reason why they do this? and if there is, does it provide any actual legal protection?

In general, TV shows or other fictional works will use fictional brands to avoid infringing the brand's trademark. According to Wikipedia, this occurs more often when the brand is used in a potentially negative way.

In your specific example, however, it's clear that (as commenters pointed out) the brand "Sprawlmart" was a parody intended to be humorous and was not for legal reasons.

Don't know if this adds much to discussion, please comment if not and I will remove this post.

If television networks would do so, they have to pay a fine (there are even some hilarious cases where for instance the TV station had to pay a fine because a person they interviewed for the News was wearing a T-shirt of a specific brand).

I can imagine that some fictional shows that target an international audience - like The Simpsons - are aware of such laws and thus make a parody on these brands in order to increase the number of potential television networks broadcasting the show.

An additional reason for not using a brand's trademark is because the production company does not want to pay the licensing fees associated with gaining the right to use the trademark in their work. This is why you will sometimes see logos blurred out. Alternatively, you will often see prominent brand logos in films/tv shows that have been paid for product placement by the brand itself.

Not the answer you're looking for? Browse other questions tagged intellectual-property or ask your own question.

0
Why is it in TV shows and Movies you never see logos of main stream stores?