On the legality of replacing international transfers with intranational ones

Here is a fictional story based on this question.

Andrey is a Russian programmer residing in Germany who makes regular wire transfers to his father, Boris, who resides in Russia. Chris & Dasha, a married couple, also reside in Germany. Dasha is Russian and would like to wire money from her Russian bank account to her husband's German bank account.

Pictorially, we have two international transfers. 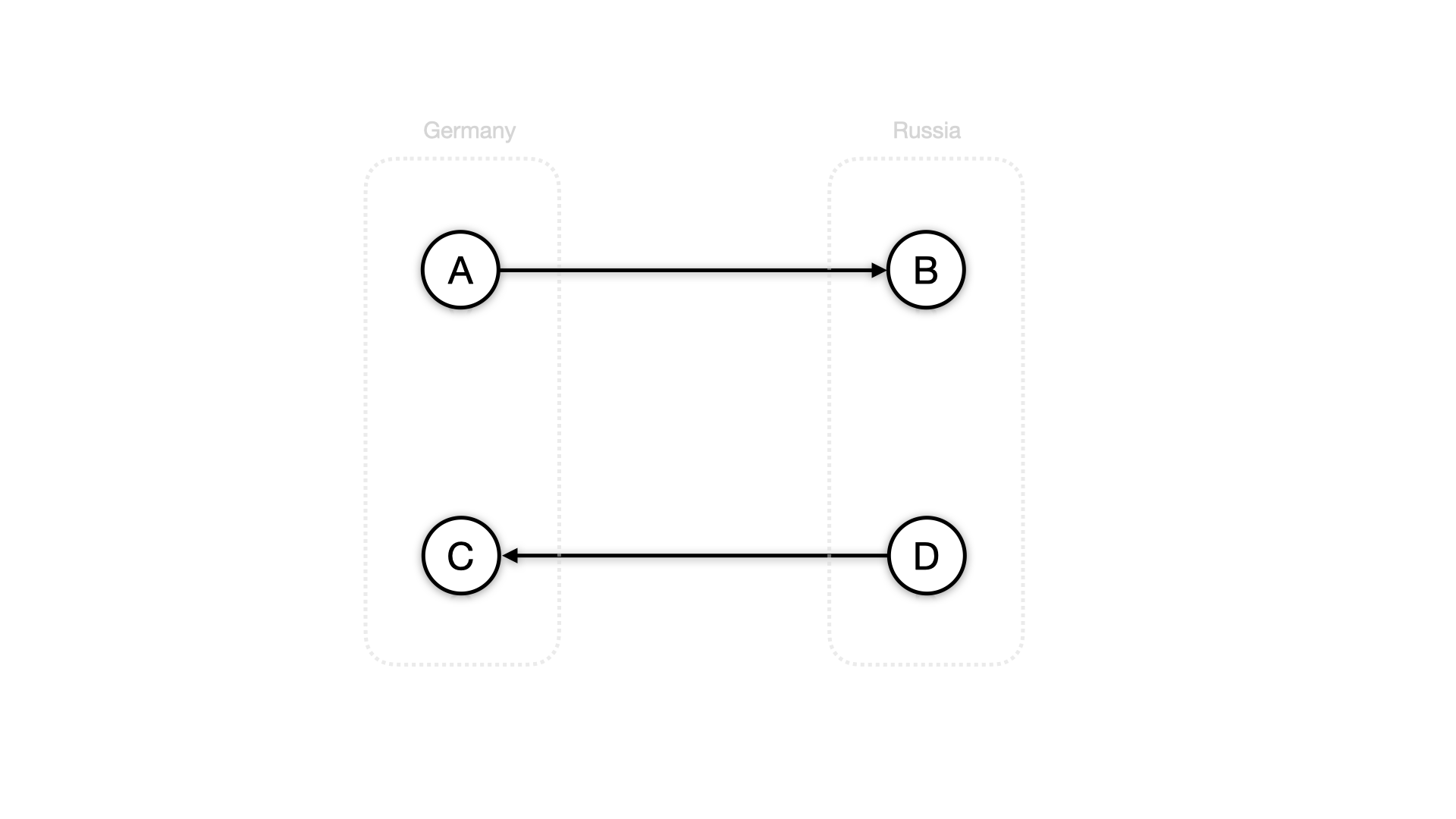 However, if Andrey and Chris became acquainted, we could have two intranational transfers instead, as depicted below. Boris and Chris would receive the same amounts as before. 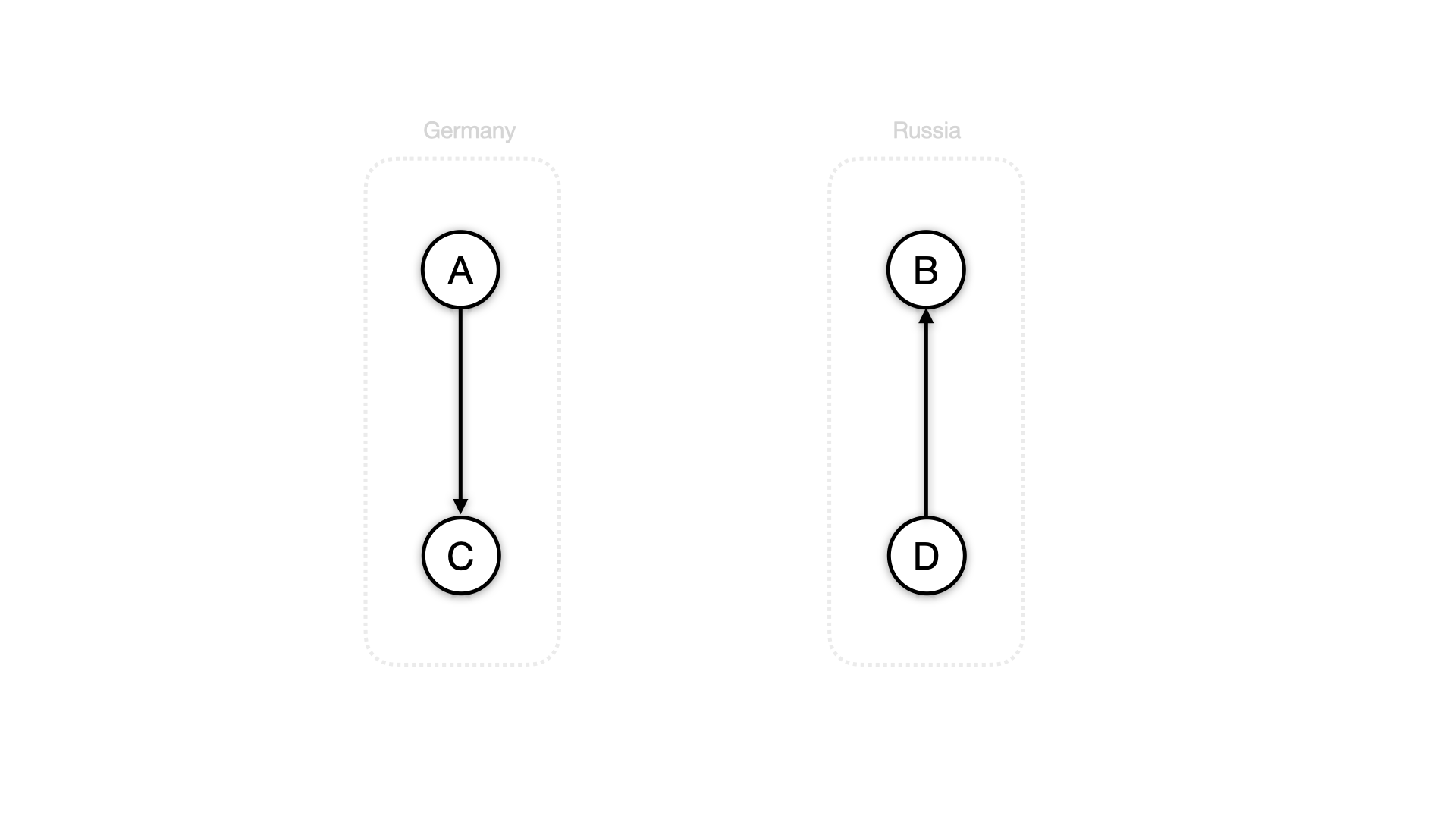 Would this be legal? I am interested not only in the pair of jurisdictions Germany-Russia, but also UK-Russia, US-Russia, or X-Y in which jurisdictions X and Y are chosen so that this thought experiment is interesting (in some sense).

Some thoughts and other (subsequent) questions:

Would this be legal?

Probably at this scale. Not necessarily extrapolated to a large commercial operation involving more parties.

At some point it becomes a payment system and a financial enterprise that becomes subject to financial regulation.

Could her transfer be viewed as a donation as well?

This is not a donation transaction and efforts to characterize it in that fashion would probably be disregarded by authorities.

Could they be viewed as money laundering?

The core element of money laundering is an effort to conceal the source of the funds for some purpose. It isn't clear if that would or would not be a motive.

The big benefit of correspondent banking, aside from being transparent, is that it avoids currency exchange risks, fees and considerations for small, ordinary transactions.

Of course, it simply isn't difficult or expensive to simply wire money from Russia to Germany, and vice versa, now and then. There are not strict currency controls, although there are some potential disclosure requirements. One reason for you, or authorities to worry about characterization of the transactions as money laundering is that if you have nothing to hide, simple wire transfers would be the usual and ordinary way of handling matters.

With a legal contract in both countries,

would probably be doable since it would then be transparent.

The details would be dependent on the Jurisdiction of each party participating.

Not the answer you're looking for? Browse other questions tagged banking currency is-x-legal money-laundering or ask your own question.

3
Impersonating account holder, with perfectly good intentions, and the person himself willingly assisting. Is that a crime?
1
What are the legal implications of manipulating Bitcoin if you could “forge” transactions?
1
On the Legality of Teens Trading Stocks---Cf. Barron's (6/14): ``Here Come the Teens: New Apps Make it a Cinch for Teenagers to Trade Stocks...''
0
Chase accounts closing due to fraud from joint account with sibling. Will I get my money back in the other accounts?
1
How to lend money to a friend in Germany with the possibility to enforce return if he doesn't pay back?