Can a photo that contains a trademark be used by a political campaign?

There's a current kerfuffle regarding a campaign photo used by the Biden campaign. 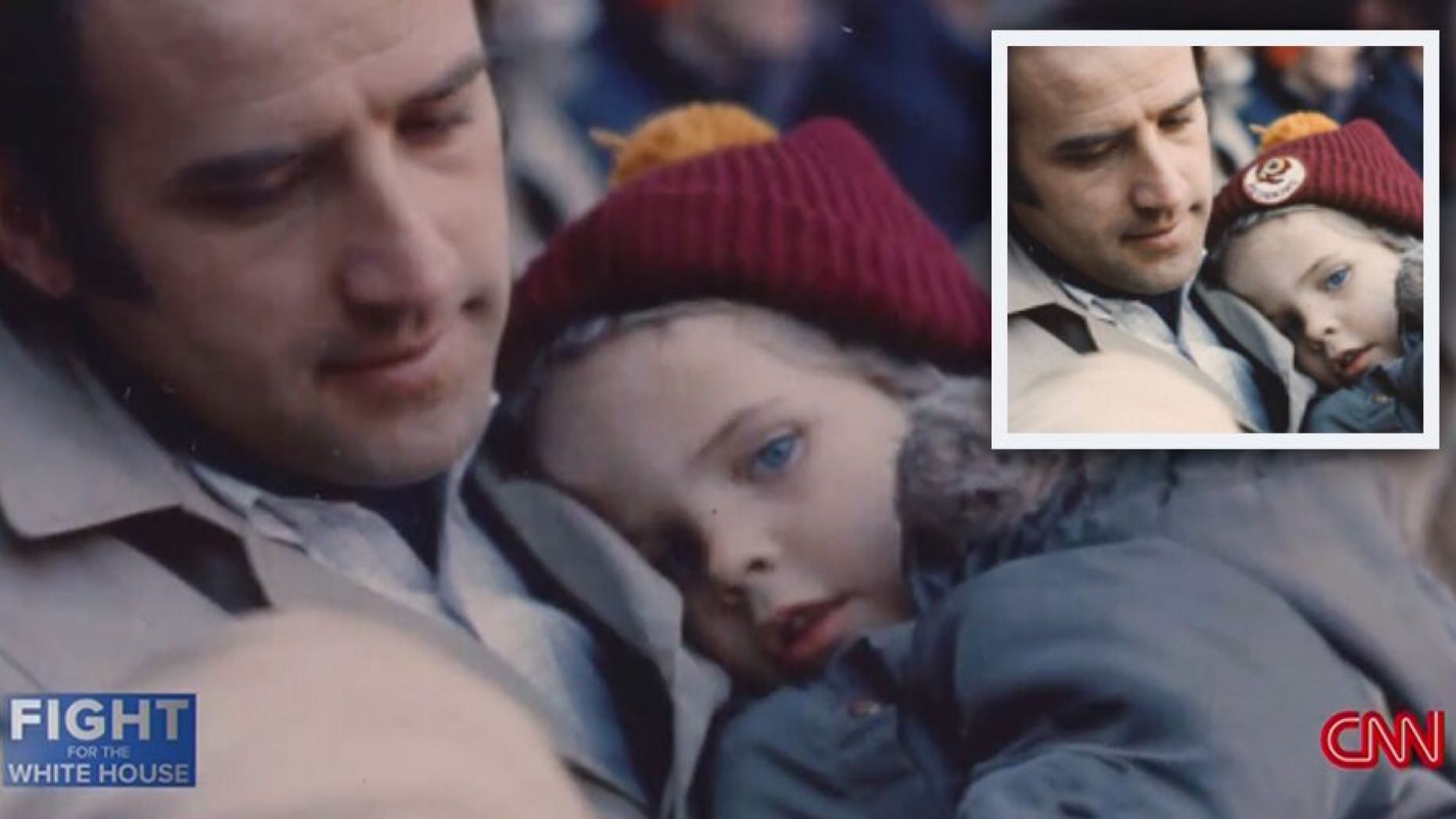 The photo shows the logo for the Washington Redskins in the original photo but removed in the photo displayed on CNN. Since the original story, though, the Biden campaign has said that they supplied the altered photo to CNN and the campaign had removed the logo because it is "copyrighted" and that such a step is "a very common practice on campaigns."

The original photo is still located on Facebook where it was initially used to celebrate Father's Day.

Is there anything about copyright, or trademark, law that would require such editing?

As far as I am aware both these answers are incorrect, but as I am not a lawyer let me quote the World Intellectual Property Organization (part of the UN):

Unlike copyright law, trademark law as such does not restrict the use of a trademark in a photograph. What it does forbid is the use of a trademark in a way that can cause confusion regarding the affiliation of the trademark owner to the image. If consumers are likely to mistakenly believe that the trademark owner sponsored a photograph, then there may be trademark infringement. For example, if a Nike logo was visible on the t-shirt worn by the boy in our photo-shoot scenario, this could be seen as an attempt to appropriate consumer goodwill associated with the Nike trademark. So, caution is required if photographing someone wearing or consuming a trademarked product.

Source: IP and Business: Using Photographs of Copyrighted Works and Trademarks (emphasis mine)

So the basic idea is that if the Washington Redskins would not want to be associated with the Biden campaign, they could file a lawsuit claiming that the photo suggests there might be an affiliation between the campaign and the sport organization. In other words, the question one has to ask is: Is there a chance we might benefit in any way from the goodwill associated with the trademark?

The way it was explained in a copyright course1 I watched was that:

The biden campaign claimed that

A campaign aide told Fox News the logo was removed from the photo because it is "copyrighted" and claimed that such a step is "a very common practice on campaigns."

To my knowledge that are no actual copyright concerns here, but - just like with the aforementioned course - trademark matters often get covered in the same setting as copyright laws, so I have a very easy time believing that this is 'a very common practice on campaigns'. It's incredibly unlikely that for this specific photo the Washington Redskins would have actually claimed that Biden was benefiting from the goodwill associated with their brand (especially considering all the controversy surrounding them), but it's a completely believable general policy. The interesting thing is that they didn't care as much about postings on social media compared to more traditional channels, but this is in line with what I have seen in many companies and organizations.

1 - This course was trying to generalize international law in a way that content producers won't get in trouble anywhere rather than exclusively explain US law.
2 - The example didn't use a 'political candidate' explicitly, but something along the lines of a recognizable public figure who is not just getting a burger

There's nothing in trademark law or copyright law that required the removal of this logo before the campaign could use the photograph. The campaign probably does not want to deal with the possible perception that it is claiming endorsement by the company whose logo it removed. Rather than publishing a disclaimer, they found it simpler to modify the photograph.

A Standard Operating Procedure Influenced by the Law

I'm not a lawyer, but I do have years of experience in the graphic arts industry, and when you work in an industry were lawsuits are common, you need to know how to avoid those lawsuits without being a lawyer yourself.

From the perspective of the graphic artist, a person can file a lawsuit against you for all sorts of stuff, and sometimes they win despite you following what you believe to be the letter of the law. This can become even more complicated when you have a campaign where unexpected state or international laws may come into play, or where your client's entity type may matter, or where the Trademark owner's entity type might matter. Even in cases where the lawsuit is unenforceable, it's still a nuisance to the person being sued; so, many businesses and professionals adopt standard operating procedures where the goal is not to win court cases but to avoid them all together through catch-all policies.

Many, but not all, graphic artists routinely remove all logos from their work even where acceptable use applies to avoid the possibility of a lawsuit. So, this photo is likely to be the result of a standard operating procedure rather than having anything to to with the redskins or enforceability of the law.

To find out if the Biden campaign is being honest about why they removed the logo, you just need to look at the previous work of the graphic artist who did it to see if this was a unique discrimination against the redskins logo, or if it is their standard operating procedure to always do this.

Removing a logo, cropping the photo, or otherwise altering a photo is a "derivative work" of the original and would be a copyright violation if permission was not granted prior to use. There are no exceptions for presidential campaigns.

It's also possible that the "copyright" part of the Redskins claim is more related to the name controversy than anything else and they are using copyright as an excuse not to get caught up in a debate.

For instance a 501(C)(3) organization will have its non-profit status revoked if it is caught endorsing a candidate. (because that would be an end-run around the tax law making its donations tax deductible and political donations not tax deductible).

Nonprofits are more widespread than you think. Many hospitals are structured as non-profits. The Green Bay Packers is owned and subsidized by the City of Green Bay - another entity that cannot be seen endorsing a candidate.

I haven't researched the exact corporate structure the Packers or Redskins are organized as - call that an oversight in my answer, but that's exactly the point.

Like me and a lot of creators, campaigns don't have time to deep-dive corporate-structure research on every brand or logo that comes up. And even if that research shows it's in the clear, so what? That still doesn't give permission, or avoid any of the other "cans of worms" you could be opening unawares.

Given that featuring the wrong logo in your material can be a hand grenade in the lap of that organization (or your own), the most prudent course is simply to avoid/remove the art or logo always.

If CNN had effaced the logo like this, then it would be a case of altering a news photo, which has ruined journalist's careers. Their choice should have been to blur it; which is distracting and may have rendered the photo of low value for their purpose, but that's their problem.

But for use in Biden's campaign, I think their question would have been "what makes this photo work best for our purposes". A logo or word that doesn't support them can only be distracting, and any sports logo is going to alienate the majority of fans who support some other team. Add in those who dislike this particular logo, and the campaign had ample reasons to remove it. And within the context of the statement it's making ("dads and kids are cute and therefore you should vote for Biden") there's no dishonesty in doing so.

Not the answer you're looking for? Browse other questions tagged united-states copyright trademark or ask your own question.